June (voice of Brianna Denski) and Greta the wild boar (Mila Kunis) in a scene from "Wonder Park." MUST CREDIT: Paramount Animation/Nickelodeon Movies 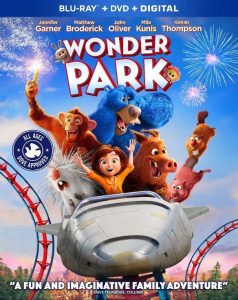 Wonder Park tells the story of a magnificent amusement park where the imagination of a wildly creative girl named June comes alive.

I give the Wonder Park Blu-ray a B.

Wonder Park follows June, a young girl (with the help of her mom) who creates an amusement park with her vivid imagination. When her Mom falls ill, June can’t go on and scratches every memory of the park out.  On her way to Math Camp, she takes a detour to Wonder Park and must save her beloved park from the darkness that was created with her absence.

I really enjoyed this film.  I’m not a big fan of animation but there are a few films I really enjoyed and this happens to be one of them.  I felt for June when her Mom was sent away with an illness.  I had lost my mom years ago to cancer and I knew exactly what she was going through.  Wonder Park was a project that June and her Mom would do together.  With her Mom’s absence, she just lost the love for it as it probably reminded her of her Mom not being there.  When she actually entered Wonder Park and saw her imagination come to life.  The love and excitement had returned.  It was as if all that pain she kept inside was released once she realized the Park needed her.  Yes, there is a happy ending to this film.  Her Mom comes back home!