Marvel Studios has released two episodes of the very anticipated WandaVision on their exclusive streaming service Disney Plus. The show offers an extremely unique setting to the Marvel Universe. The plot mostly focuses on the classic sitcom situations of the 50s, 60’s, 70’s, and possibly even more into the future. But, an overarching mystery is hinted from episode to episode that has yet to be revealed.

A few weeks ago we were lucky enough to be invited to WandaVision’s press conference where the cast and crew attended. There they spoke about their experiences filming, preparing to emulate the different eras of television, plotline, and much more. 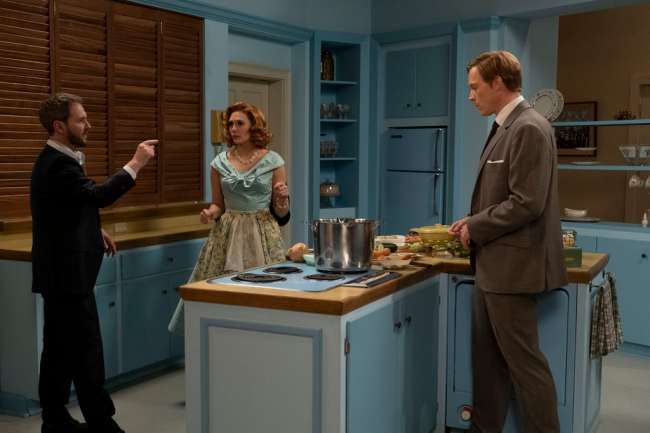 Here are a few highlights from the event:

– What classic sitcom did the show pull from exactly?

If you grew up watching classic sitcoms you will probably find yourself debating with your friends and family about exactly what shows were emulated. Was it Bewitched? Was it Leave It to Beaver? Was it The Brady Bunch? They all seemed to be an influencer but, according to Wanda Maximoff herself (Elizabeth Olsen) it was an amalgamation of Mary Tyler Moore and Elizabeth Montgomery plus some I Love Lucy in the 70s because there’s so much physical comedy.

Also – Director Matt Shakman was looking to be “as authentic as possible” so mostly everyone involved in the production watched a ton of old television episodes from the 50s, 60s, & 70s.

On the surface WandaVision seems to be a comedy more than a drama or even a mystery series. One thing I noticed was that the show actually pulls a bit from The Twilight Zone. Especially from an episode titled “The Good Life,” where a kid with unlimited powers terrorizes a seemingly pleasant neighborhood.

My suspicions of The Twilight Zone influences were validated during the press conference by Marvel producer Kevin Feige.

“When we were in our period sitcoms, that when something shifted from say a Dick Van Dyke or an I Love Lucy style into something that was outside of that it was going into kind of a Twilight Zone. – Feige said

– Why do the effects look so realistic?

It’s no secret that WandaVision is not given an Avengers movie type budget for the effects but how does it look so realistic?
It turns out that much of the show uses practical effects. According to Elizabeth Olsen the special effects team worked hard studying how sitcoms from the past would pull off the VFX Magic of their day and used those methods to bring it to this show.

Now that is awesome!