Video of Bumblebee Crashing While Filming “Transformer 3” in DC

Washington D.C. is the backdrop for the filming of Transformers 3.  Unfortunately, famed and beloved Autobot Bumblebee was involved in a tragic collision with an on-duty police officer.  The yellow Chevy Camaro collided with a police SUV on its way to a site nearby where a suspicious package had been spotted.  The 25-year veteran police officer was using a different radio frequency than the officers working on the set.  The SUV drove into the scene while Bumblebee was shooting one of his more shining moments.  The Camaro T-boned the SUV sustaining severe front end damage.  The police officer received minor injuries and was taken to a local hospital.  No word on the condition of Bumblebee. 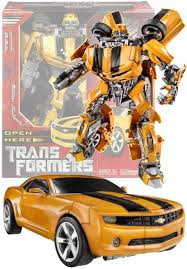