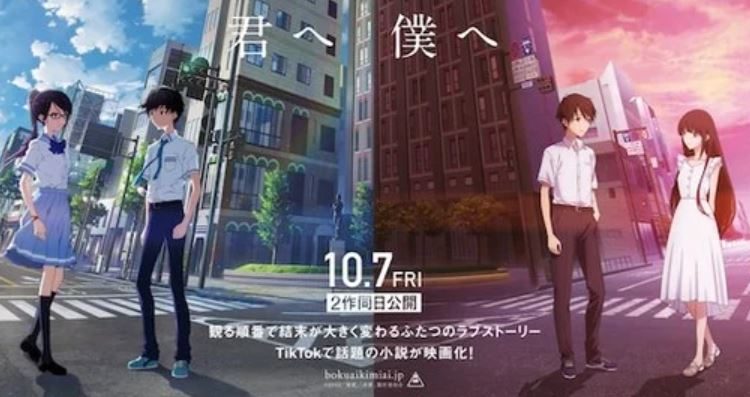 Toei recently released the trailers for the intriguing sci-fi romance films Boku ga Aishita Subete no Kimi e (To Every You I’ve Loved Before) and Kimi o Aishita Hitori no Boku e (To The Solitary Me That Loved You).

The two film series is one of the most anticipated releases this year for fans of works like that of Makoto Shinkai’s Your Name, Naoko Yamada’s A Silent Voice, and Shinichiro Ushijima’s I Want to Eat Your Pancreas.

Written as light novels by Yomiji Otono in 2016, both books take place in a universe where traveling between parallel worlds and slipping back-and-forth is a common, normal occurrence.

In Boku ga Aishita Subete no Kimi e, Koyomi Takasaki, who lives with his divorced mother, is a socially awkward high schooler attending university prep school. He has difficulty making friends but is one day approached by classmate Kazune Takigawa who claims to be from the 85th world where they are lovers.

In Kimi o Aishita Hitori no Boku e, Koyomi Hidaka, a boy who lives with his divorced father, falls in love with Shiori Sato, a girl he met at his father’s research lab. However, things turn difficult when their parents engage to marry, and the two decide to flee to a parallel world where they are not stepsiblings.

As an creative and fun puzzle, the story lines of both films are related and can be read or watched in either order. Depending on the order the audience journeys through the two storylines, the audience may experience different feelings in regard to the characters and plot.

Both films will be simultaneously released on October 7th this fall. Audiences can pick which one they want to watch first.