Nostalgia is a powerful thing. It can be either a great (think Netflix’s Castlevania series), or a huge mess (think Duke Nukem Forever). I was a kid of the 90’s, so I grew up with Sonic the Hedgehog, with Sonic 3 & Knuckles still being one of my favorite games of all time. However, films based on video games have never really been that good. Sure, there have been ones that have been “enjoyable” back when I was a kid, but I know better now. The only video game movie that I really like was last year’s Detective Pikachu.

The movie begins as Dr. Robotnik (Jim Carrey) is chasing Sonic through the city. It’s one of those scenarios that takes place more than halfway through the film setting up a flashback to explain the events leading up to this scene. Sonic starts off by explaining  his origins as we see him dashing through Green Hill (Zone) as a young hedgehog. He was born with his ability to run fast, which made him a target for those who wanted his power. It’s not a bad story, a bit on the simple side, but soon after Sonic is attacked by a tribe of Echidnas. Longclaw, a character who appears to be Sonic’s mentor and guardian, then sends him off to another world using the power of the rings and warns him to stay hidden. Fast forward 10 years, and a much older Sonic is laying low in Green Hills (Get it?), keeping his distance from people even though he wants to reach out. 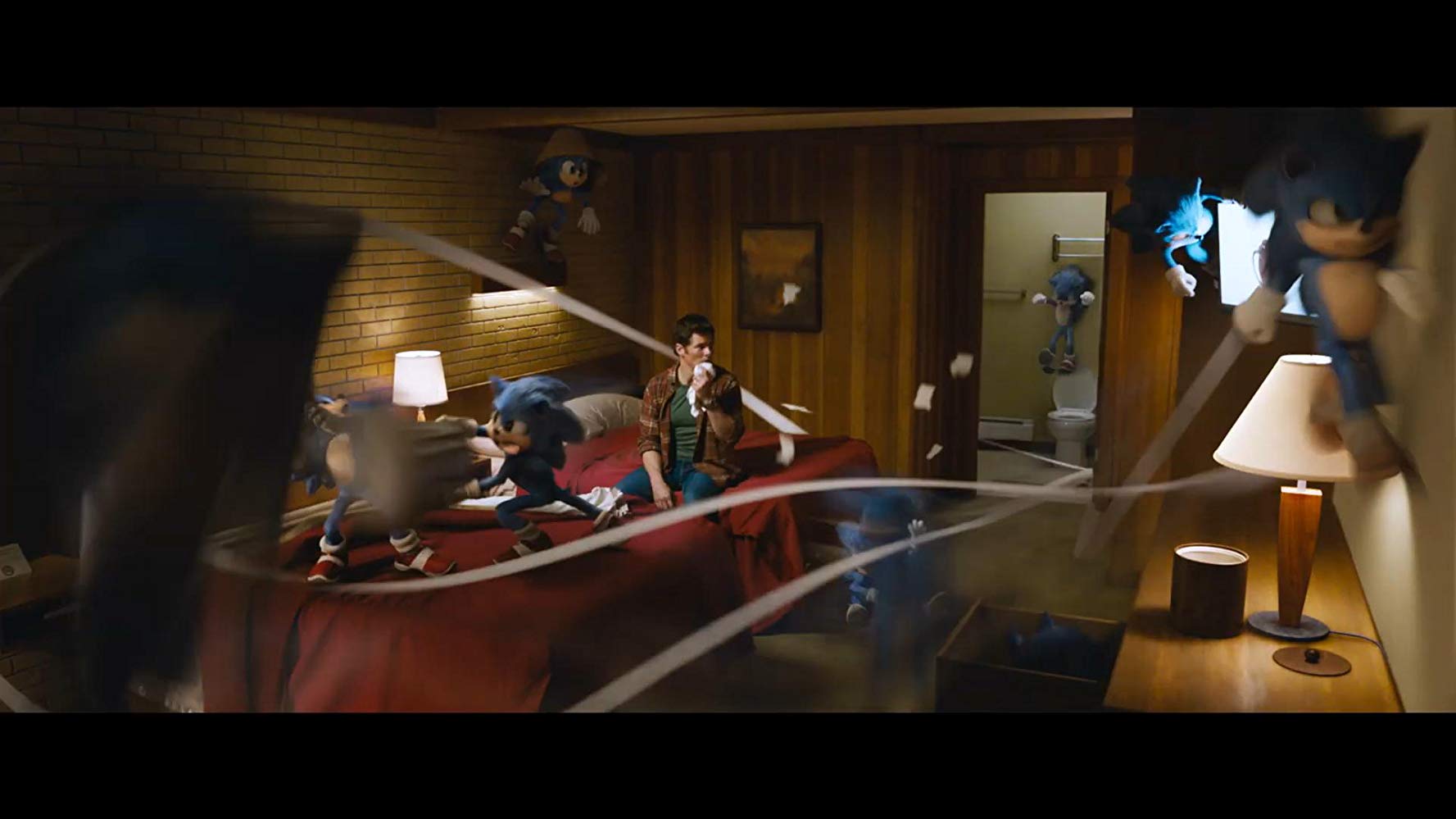 Sonic acts like he has it together, but in reality, it just makes him realize how lonely he is. He knows if he messes up he will have to head to another world, and his next one is a place where there are no other lifeforms, only mushrooms. That is one place he doesn’t want to go. Eventually, he loses it, and he runs so fast that he causes a shockwave that knocks out all the power in Greens Hills, which causes the government to take action and call in a specialist. That person is Dr. Robotnik (Jim Carrey).

Sonic might be able to run at Sonic speeds past multiple zones in the game, but getting to San Francisco might be a bit hard if he doesn’t know where he is going, so Tom Wachowski (James Marsden) helps him since it was kind of his fault things happened and Sonic’s portal rings were lost. OK, it was all Tom’s fault. Together, this duo works quite well. The film gives both characters time to shine, and Sonic gains the one thing he has been longing for: Companionship. Things between Sonic and Tom start off rocky, but it doesn’t take too long before the two really click in all the right ways. The antics they get into are pretty amusing and fit Sonic’s character perfectly.

Jim Carrey does a pretty good job as Dr. Robotnik. It’s not exactly the villain we’ve seen in any other type of media for the franchise. From the first trailer shown, his take on the character felt a lot like Ace Ventura, only with a massive IQ. As the movie progressed, I didn’t actually mind his take on the character. It worked, even while at times it felt a little too over the top. Also, while everyone else calls him Dr. Robotnik, Sonic is the only one who calls him Dr. Eggman in the movie and that’s because his robots are shaped like eggs. I did love the ending. We all saw the scene in the first trailer where Robotnik gets a different look from the rest of the film, which looks more in line with the character from the games. Jim Carrey even changes his how he plays the character, which sounded a lot like Mike Pollock, who has been the English voice actor for Dr. Eggman since Sonic X. I absolutely loved it!

I was a bit confused from the start as to why Paramount decided to cast Ben Schwartz as Sonic instead of Sonic’s current voice actor, Roger Craig Smith. It’s an iconic voice that many will recognize. I mean, heck, he even voiced Sonic in Wreck-it Ralph. Either way, Ben Schwartz does a great job as Sonic. It didn’t take long for me to get used to his voice, though it did at times come off like his version of Dewey Duck in the new DuckTales animated series.

This is a movie fans will love. Visually, it looks great and pays homage to the game series. Sonic the Hedgehog is not a perfect movie, since it has a few plot holes. Overall, it is an enjoyable experience. It does add its own twist to the source material, but it added more to the story than taking away from it. Of course, a movie all about Sonic running non-stop wouldn’t work. In a game, that’s fine, sure, but here we see more of Sonic’s personality. There’s a loving caring side to him, where he just wants to belong, and of course, he still has all the attitude you would expect from this little speedster.

There are tons of easter egg references to the game franchise throughout the film. I managed to catch quite a few, but there are probably quite a few more I missed. Some are very subtle. I may need to watch the movie again to see what I missed, and I don’t mind one bit. There is the scene that gets me excited for a possible sequel, with none other than Tails! Yes, that may be a huge spoiler, but his design was awesome. We can thank Tyson Hesse, an artist who has worked on various Sonic projects including Sonic Mania since he was brought on to help with the character redesign for Sonic in the film after it was delayed, and he likely worked on Tails as well. Everyone cheered and went wild when Tails appeared. If we do get more Sonic movies that bring in more of the franchise’s iconic characters, I hope Paramount keeps working with Tyson Hesse.

My final thoughts come to the music. Surprisingly, there was very little Sonic music used in this movie. There was only one, maybe two tracks from the Sonic games utilized throughout the whole experience, and that’s a bit of a shame. You can never go wrong with Green Hill Zone, but you would think during a car scene we would get a Crush 40 song, maybe Chemical Plant Zone music, or something. It’s not a huge takeaway mind you, but the music of Sonic is so iconic that it really needs to be part of the movies in some form.

Sonic the Hedgehog is easily a movie everyone can enjoy. It’s lighthearted, it’s fun and most importantly, it helps further break the curse that all movies based on video game franchises are bad! Let’s Keep it going! On another note, I loved that Sega intro video shown right at the start of the film. It was like the Marvel Cinematic Universe opening, only focused on so many iconic Sega Franchises! 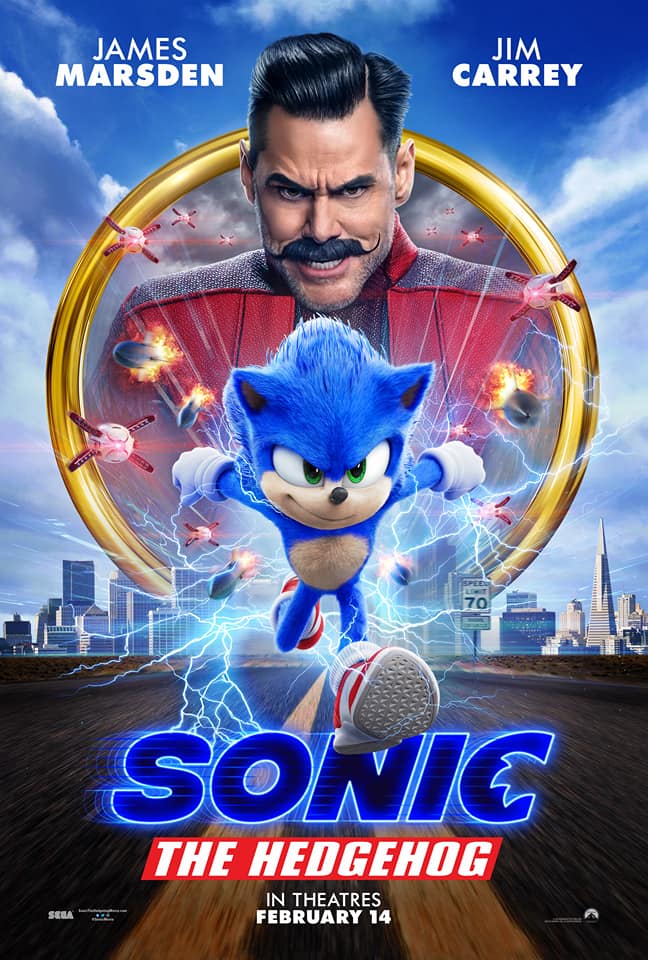