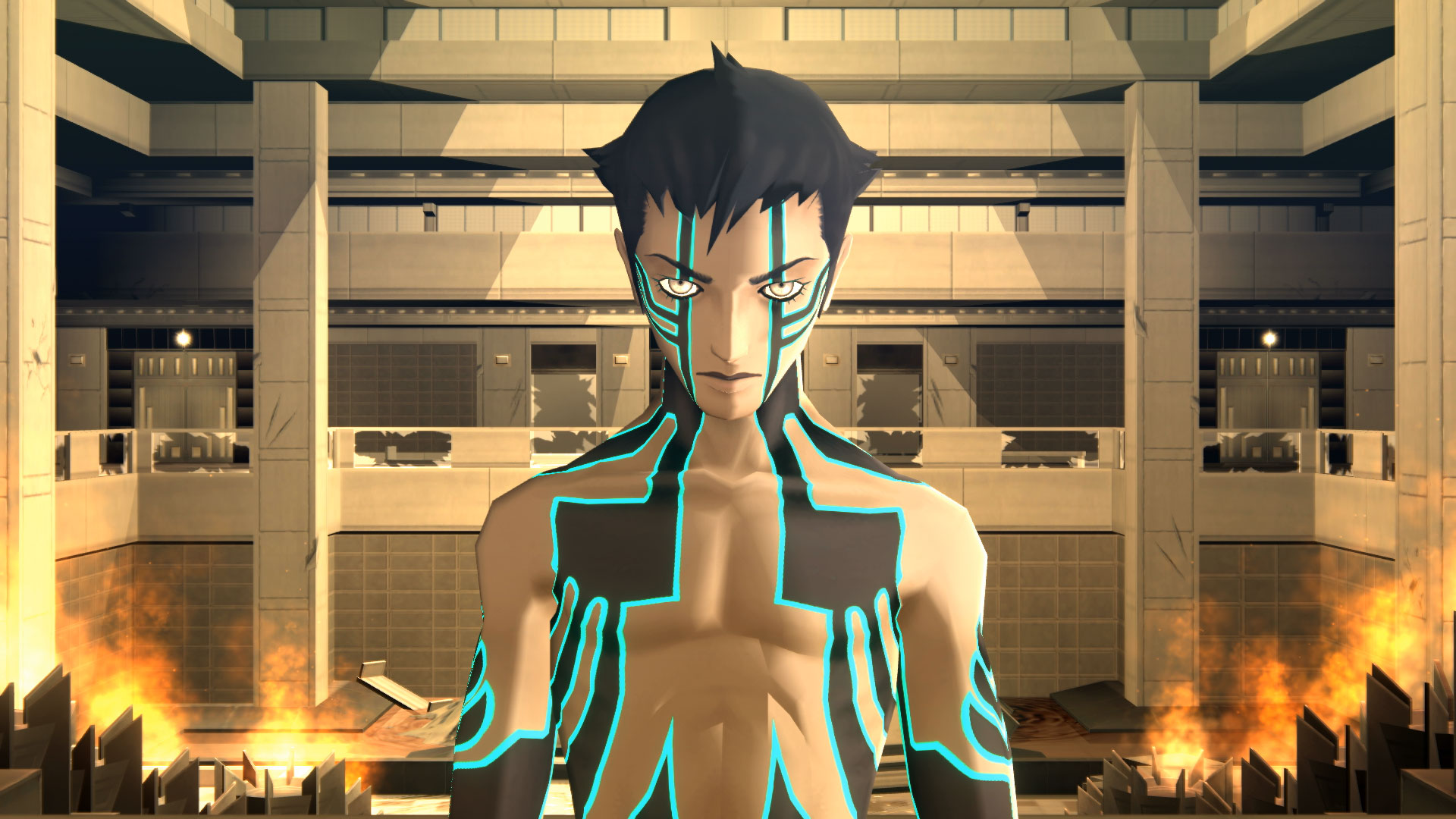 Back in July of 2020 ATLUS surprisingly announced a remastered release of their 2003 cult hit Shin Megami Tensei 3: Nocturne which has been met with excitement from the hardcore ATLUS fanbase. I however was skeptical on many fronts regarding the infamous difficulty spike this game holds along with the amount of actual quality of life adjustments we would see upon its release.

After hours and hours of playing though Shin Megami Tensei 3: Nocturne Remaster however I can now see the kindle that eventually sparked the fire that ATLUS has for their titles to this day.

Your story begins in a very tonally dull world as your character travels to Tokyo to meet up with friends Chiaki and Isamu to visit their teacher Takao at a hospital but through exposition via cutscenes and encounters you start to see a grimmer situation blossoming around our main character.

Through an event called The Conception the entire world is in an apocalyptic type of purgatory and the only one who has the possible power to shape the world is you. As the character you are tasked with traversing this new Vortex World honing a power given to you by a mysterious character named Lucifer. The Magatama is a power imbued within your character that not only helps you even the odds against demons but it also tends to attract others with the Magatama. 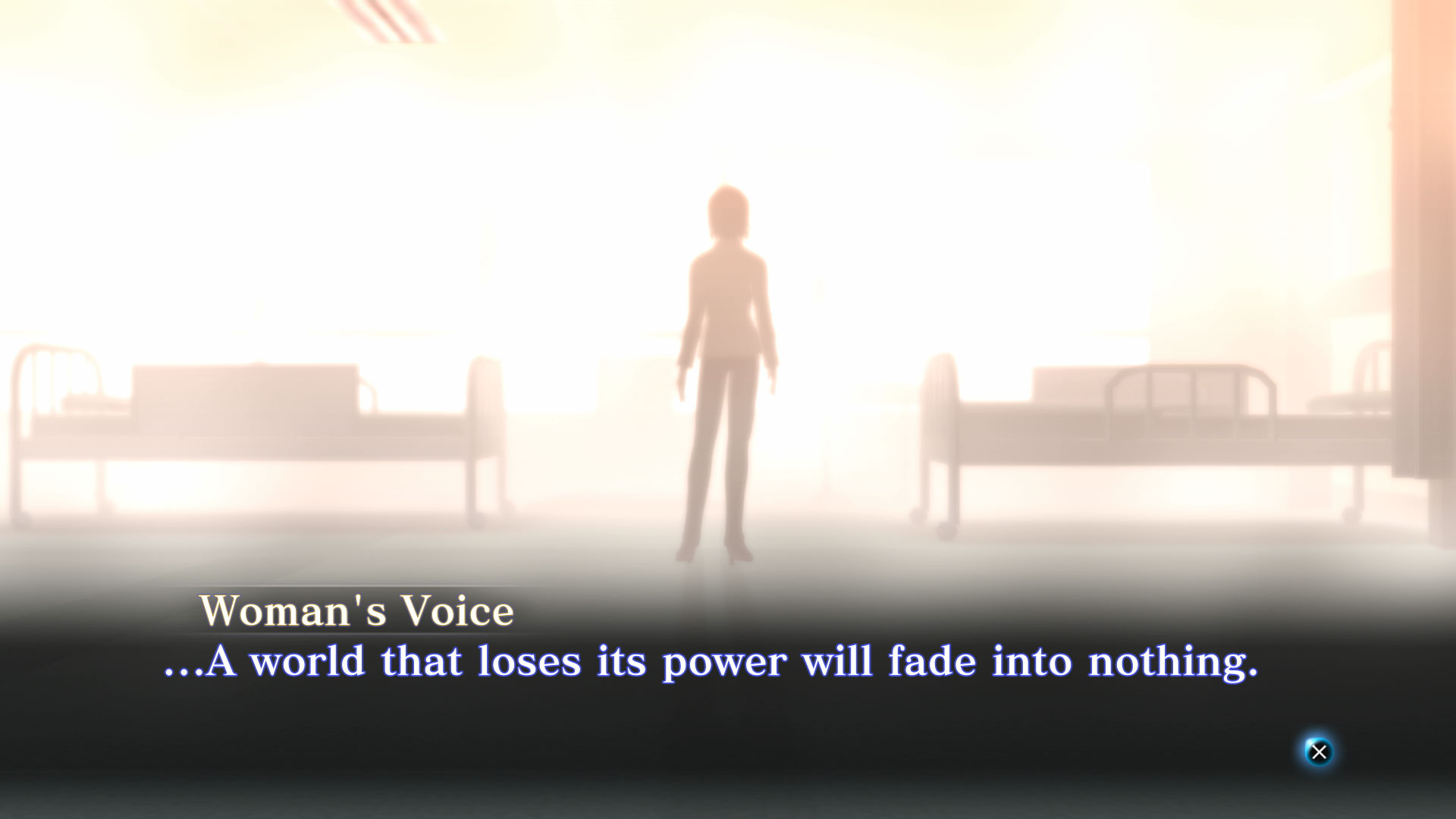 The game then becomes a bit more convoluted as many survivors begin attempts to reshape the world in their own image. At first I found the story to be a little plodding but once it geared up at the beginning of the Conception I was fully invested and absolutely interested in to see how it all plays out.

If you are aware of the reputation this game holds, you’ll know the game is somewhat long with certain sites tracking around a 50 hour completion time along with multiple endings(because ATLUS) offering players that spend ample time in the Vortex World plenty of lore and loot.

Shin Megami Tensei 3: Nocturne Remaster definitely is not trying to reinvent the wheel but it does prove that their previous games still hold up in most regards. Aside from the tank controls(which I can take or leave)travelling through corridor after corridor is more or less of the same thing that was see from old and current rpgs with long empty maze like areas with hidden caches and items the more you look. 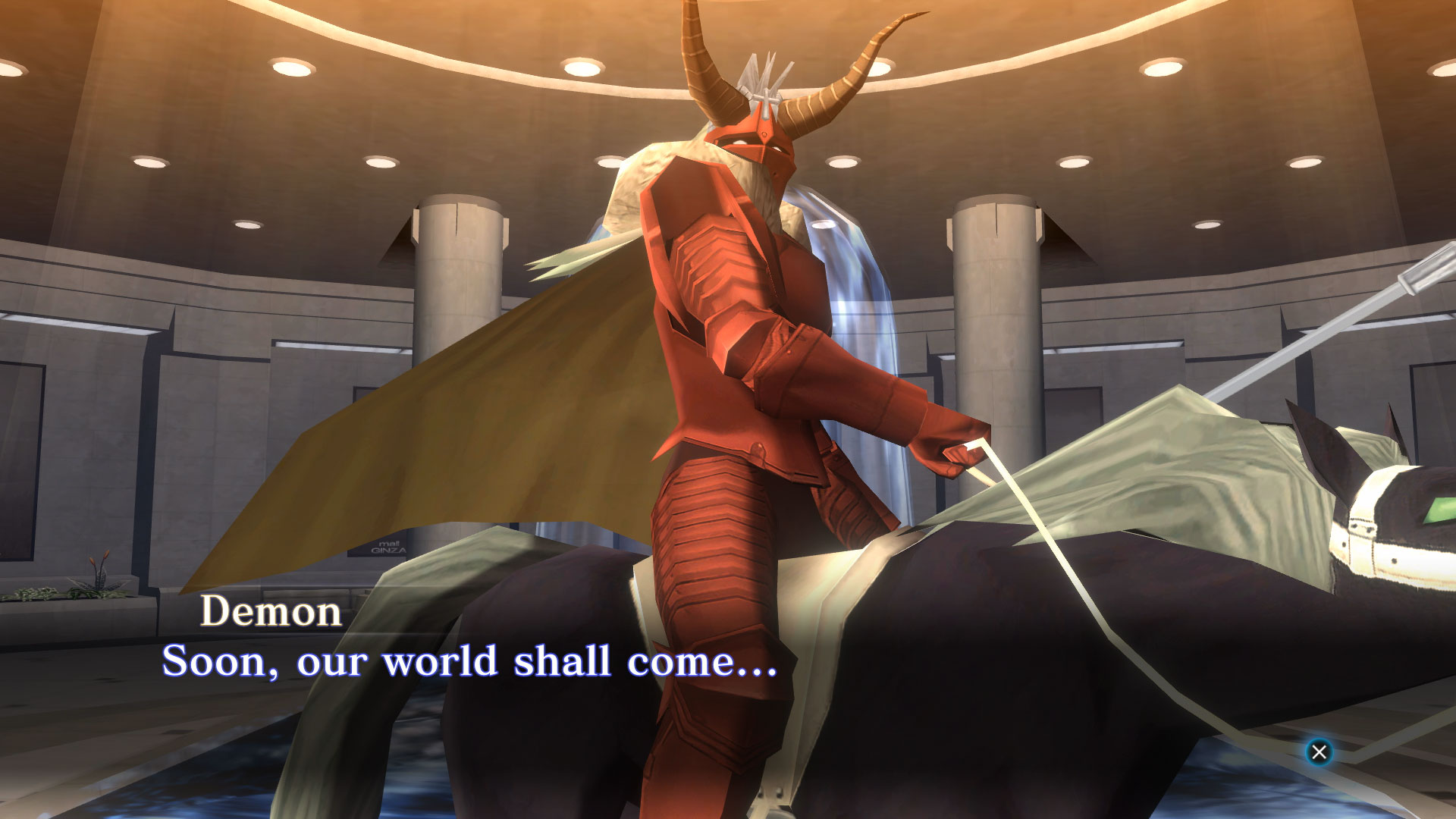 SMT3 also has the auto battle system in which enemies aren’t visually present but can always pop up. I feel like the ratio between exploration and battling was just shy of being perfect with me wanting a bit more battles in between which I understand is a very weird request given that a large amount of players can safely say that grinding is their least favorite part about rpgs.

The actual battle system itself is very fun and engaging allowing the player to either go all out on some demons or convince them to join your team to eventually level them up, combine them with others, and create greater allies. Most demons require a little incentive to join which will usually cost you some Macca(currency), a life stone, and perhaps even some extra goodies. Whether it’s Persona or SMT I always loved the idea of combining allied enemies and I think SMT3 is concrete proof that the formula of gameplay has never gone stale. 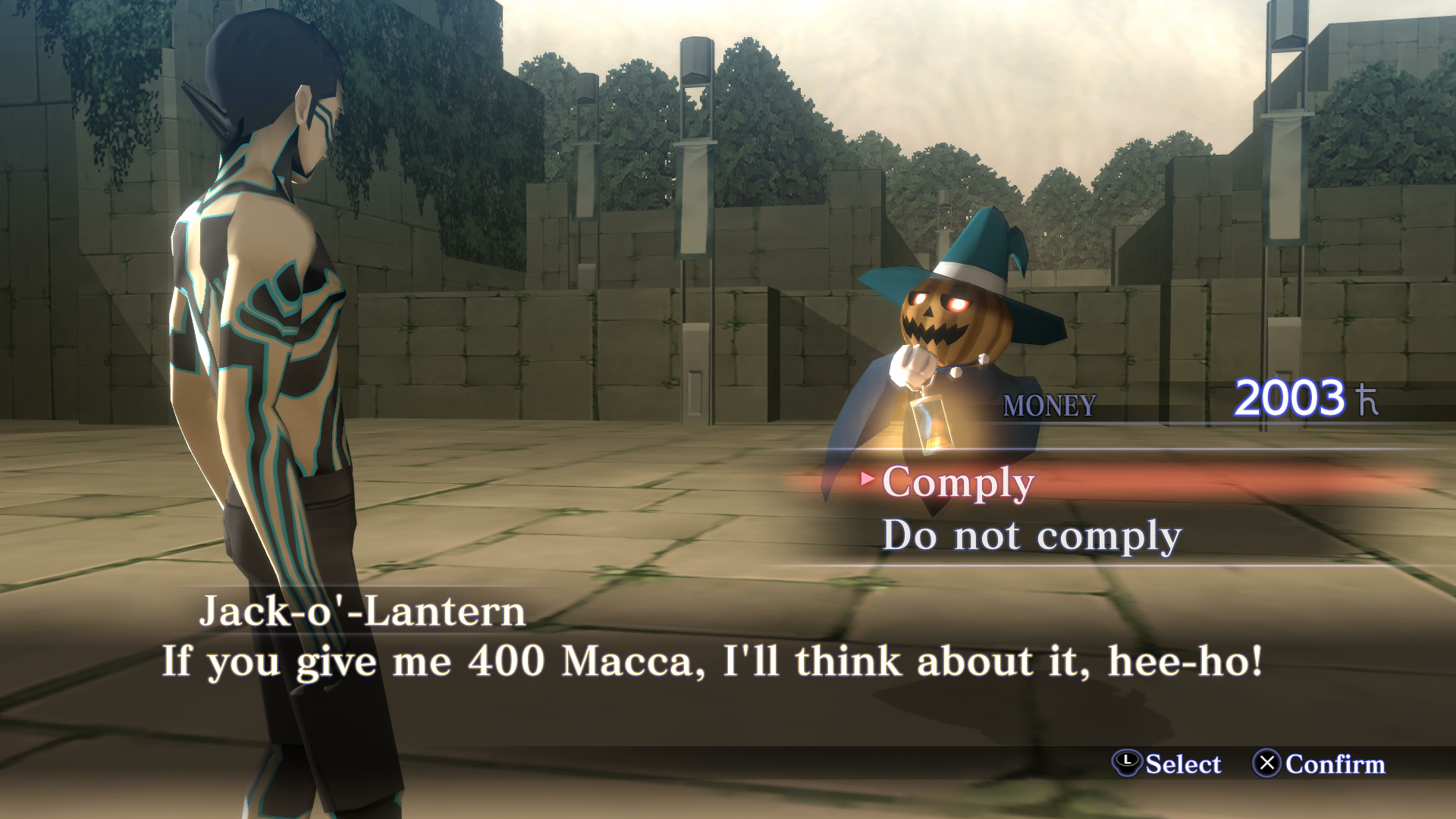 The pacing of traveling through a curser based overworld along with maze like areas made going from point A to point B plenty of fun on my long journey through the story.

Along with what made the original game so well loved throughout the years ATLUS decided to add some new additions to the game to bring up the quality of life. First up is the sorely needed quicksave feature that allows you to end the game at a moments notice rather than taking a scenic trip around the Vortex World for a save location.

Back in the day the game was notoriously known as being a very difficult game so another addition to the SMT3NR is Merciful Mode. From the time I have played in Merciful Mode I have to say I quite enjoy it and highly recommend it to those looking to play through the story for the first time before taking a deeper dive the second time around. 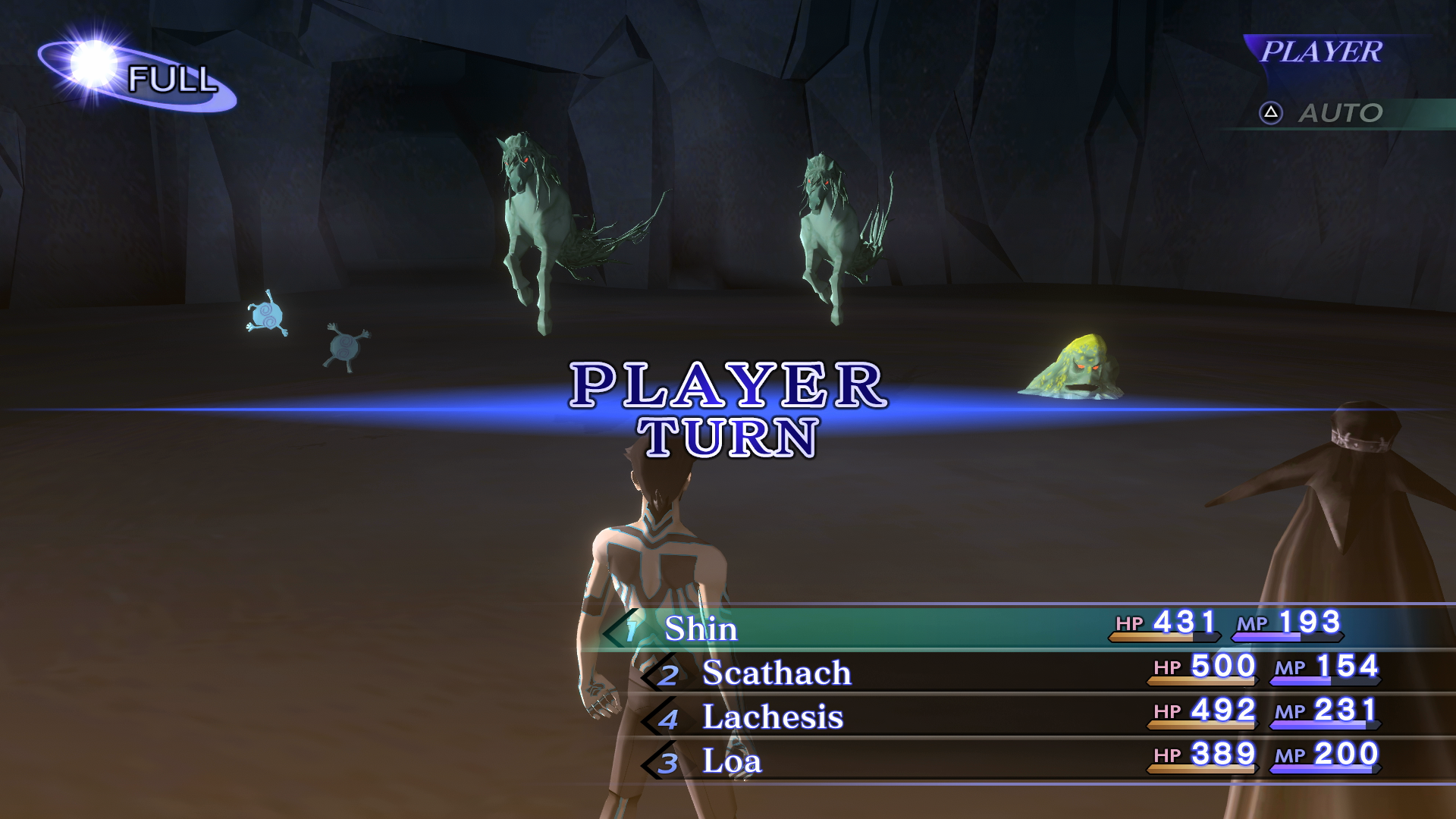 One of my biggest gripes with this game is ATLUS’s decision to offer Maniax Mode as a paid dlc. Maniax Mode is named after the second release of SMT3 in Japan featuring Dante from Devil May Cry. For 10 dollars you too can add everyone’s favorite pizza loving, demon hunting uncle to SMT3NR but why it couldn’t be included with the original game is beyond me.

Don’t Call It A Remake

Shin Megami Tensei 3: Nocturne Remaster is definitely on the lower spectrum of noticeable remasters and under the hood it’s no different. The game does the minimum when bringing the game to hd and adding some necessary quality of life enhancements to make sure it was at least playable for todays gaming needs.

The graphics have also been upscaled a bit with the only real difference I notice between the remaster and the original is that the former has a sharper character model. After looking through the original game in hd versus the remaster I can say that there is a difference in particular points of interests when it comes to environments, mainly lighting and effects. Not much else feels very different given the very flat and polygonal art style that the game is known for.

For SMT 3: Nocturne Remastered it seems that much of the environmental fog effects and shading of the sorts have been taken out and replaced with simple lighting effects to remove some of the negative space taken up by the much more dreary look of the original. 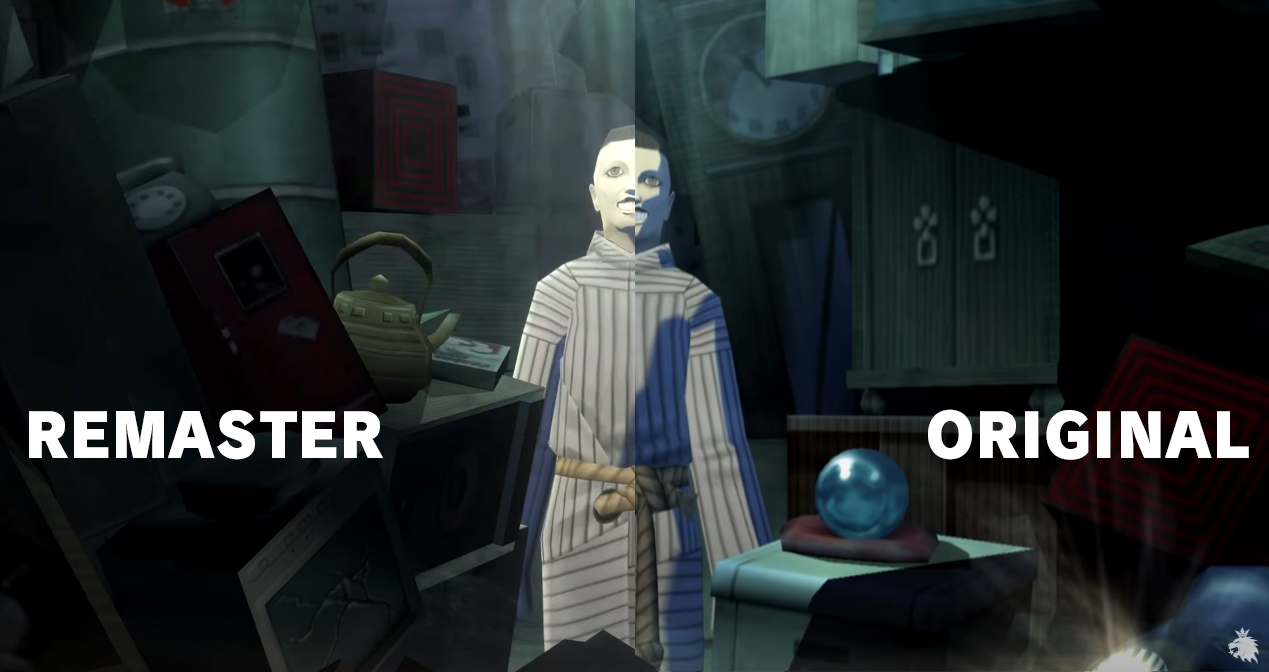 The soundtrack along with the sound effects are in tact and untouched although there is something charming about the original sounds that I am glad has not changed. The only change regarding audio is the edition of select voice acting segments. During most major cutscenes each character has a voice compared to the lack there of in the original game. The voice acting is actually above average and I am absolutely glad that this was included.

Shin Megami Tensei 3: Nocturne Remaster is a solid return for one of ATLUS’s best kept secrets offering players a definitive way to play adding quicksaving, multiple difficulties, and a downloadable Maniax Mode with Dante from Devil May Cry. Although I heavily do not agree with the companies decision to lock Dante behind 10 dollars I do think that the original game is just good enough to warrant the 50 dollar price tag for the convenience of playing through this game at least once.

With the Merciful Mode players can now play through this dark classic without the fear of getting squashed as you befriend and defeat any demon and fiend in your way while deciding the fate of your own world.