The Dragon of Dojima’s adventures are all heading to the PlayStation 4 as Sega has announced the release of The Yakuza Remastered Collection.

It’s an exciting announcement as the collection will include Yakuza 3, Yakuza 4 and Yakuza 5 but more importantly gives dates and more information about the releases. The collection will cost $59.99 with all three titles being released between now and February 11, 2020 with Yakuza 3 available digitally now. Yakuza 4 will be released on October 29, 2019 and finally Yakuza 5 will be released on February 11, 2020 which each game being unlocked as they release. 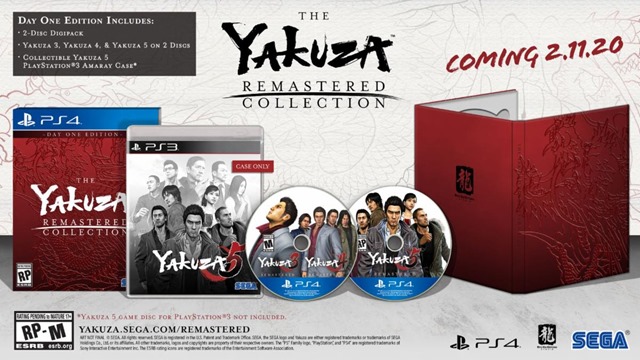 It’s a great way to enjoy the entire Yakuza series on the PlayStation 4 with Yakuza Kiwami 1 & 2 available to play now, along with Yakuza 6. Sega will release a physical version of the collection on February 11, 2020 which includes two discs (Yakuza 3 & 4 on one disc and Yakuza 5 on the other) and a Yakuza 5 PlayStation 3 case.

It’s a great way for those who might have missed out on the series the first times to enjoy this fantastic series without having to hunt down the PlayStation 3 discs individually plus the fact the game will run at 1080p at 60 fps is great. As much as I want to jump into Yakuza 3 though, I will have to hold out until the physical collection drops on February 11, 2020 but that’s just me.