Remnant: From the Ashes Steam/PS4 review

The Root have invaded Earth. Across several decades the Root lay waste to anything in its path. You find yourself in the middle of it all with nothing more than a sword, tempting fate against all odds. Remnant: From the Ashes, by Gunfire Games, brings you to a post apocalyptic world where demons roam the Earth as you struggle to survive. In this 3rd Person survival-action shooter, you find yourself alone, or with friends, in this souls-like shooter that’ll have experience fear like no other. Do you have what it takes to survive against the Root?

Remnant: From the Ashes starts you with nothing but a sword in the middle of ruins. After your journey across the ocean ends in shipwreck as you approach your destination, you come across the Root, an unknown evil that has appeared on Earth approximately 80 years prior. After a few battles, you are overwhelmed and rescued by members of Ward 13. They fill you in on what’s been going on, who they are and wonder if you have a death wish. After being equipped, you choose one of three Archtypes: Ex-Cultist, Hunter, and Scrapper. The three types act as Healer, DPS, and Tank, in the same order. Though each of the three offer different play styles, they largely play the same. What separates them is their Mod, which adds to their play style. After a few favors, the members of Ward 13 see you off into the world through the World Stone. The World Stone is your gate to not only the outside world, but also to other realms where evil lurks and your skills are put to the test. Across the map are little tidbits that reveal more of the story, and the true nature of the Root. 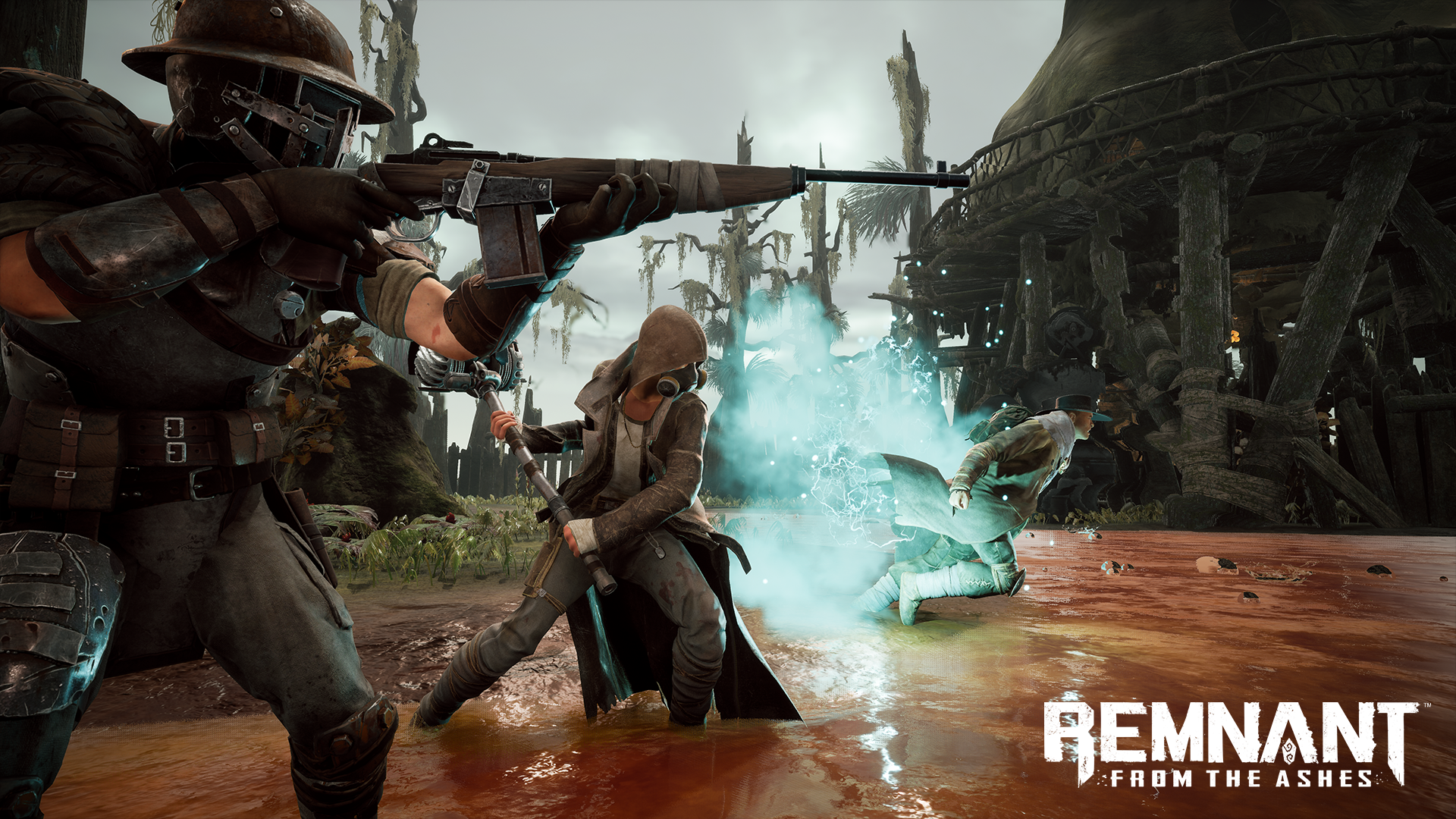 The first thing you’ll notice is how hard this game is. Even the tiniest mistakes can lead to death. The difference here is that you are not punished for each death. You can kill monsters, gather loot, and upon death, you are brought back with everything you found. This allows you to go back and strengthen your gear to try again. But as you progress and get stronger, so does the game. Difficulty increases so you always feel like your on the brink of death. The strongest and most daring will venture alone which can feel like overwhelming at first. But the true challenge is playing with others. Remnant feels like it’s designed for multiplayer. Bringing along 2 friends, or strangers, ups the challenge with scores of enemies ready to shred you to pieces. Friendly fire is enabled, so wildly shooting won’t help as your teammates can get caught in the crossfire.

Besides the difficulty, the open maps offers a great atmosphere only found in horror games. Each corner you turn, or each tunnel you wander, the echoes of the Root surround your every step. Though Remnant is a shooting game, the elements of survival horror are very noticeable. Ammo is scarce, health is nearly non-existent, and it’s dark and creepy. Grab a few friends, or join a stranger, and wander the post-apocalyptic world as you journey to stop the Root. 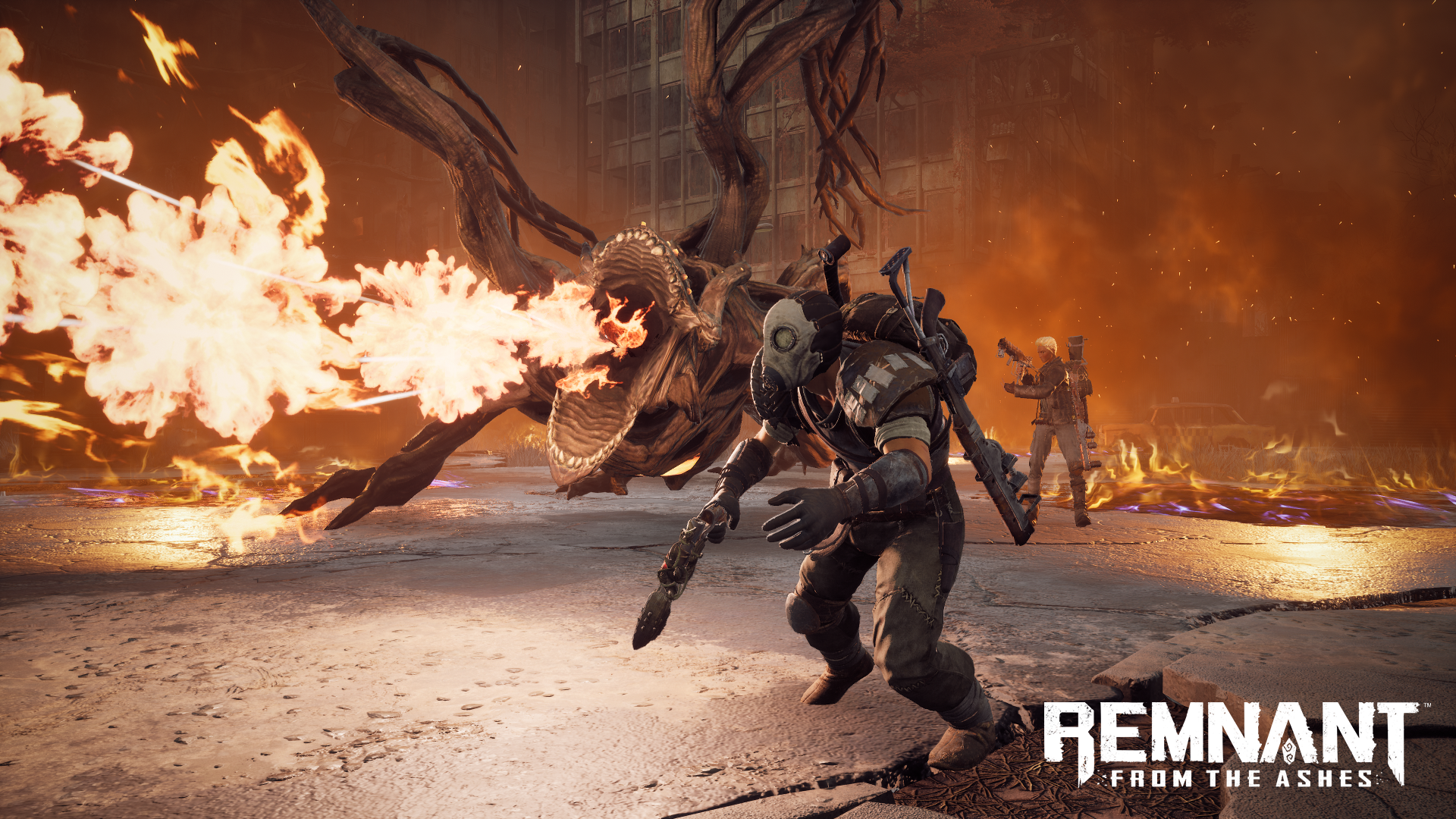 Remnant mixes several genres into one and it’s well crafted. The harsh difficulty gives you the Dark Souls vibe that drives you to get better. Either it’s the gear you have or the timing was off, overcoming the challenging bosses is rewarding. The RPG like crafting has you experimenting with different gear and mods to find the best play style that suits you. I played a few rounds alone and found the learning curve a bit hard at first. Like Dark Souls, timing is everything with the dodge element that can save you from death. With a few random teammates, the game nearly changes entirely since enemies feel a bit easier. But without warning, you can be easily swarmed and overtaken. Teamwork plays a big role, and run and gun won’t work at all, no matter how strong your gear is. Though most games I tend to play solo, the game felt more entertaining with others, even if I didn’t know them. Gunfire Games gives you an ever-changing world that provides a unique experience with each play through. The world layout itself changes with each play through, so you won’t experience the same thing over and over, offering countless hours of game play. Mixing genres is difficult, but Gunfire Games nailed it with Remnant: From the Ashes with a good blend of survival horror, shooter and Dark Souls like difficulty that’ll have you in tears.