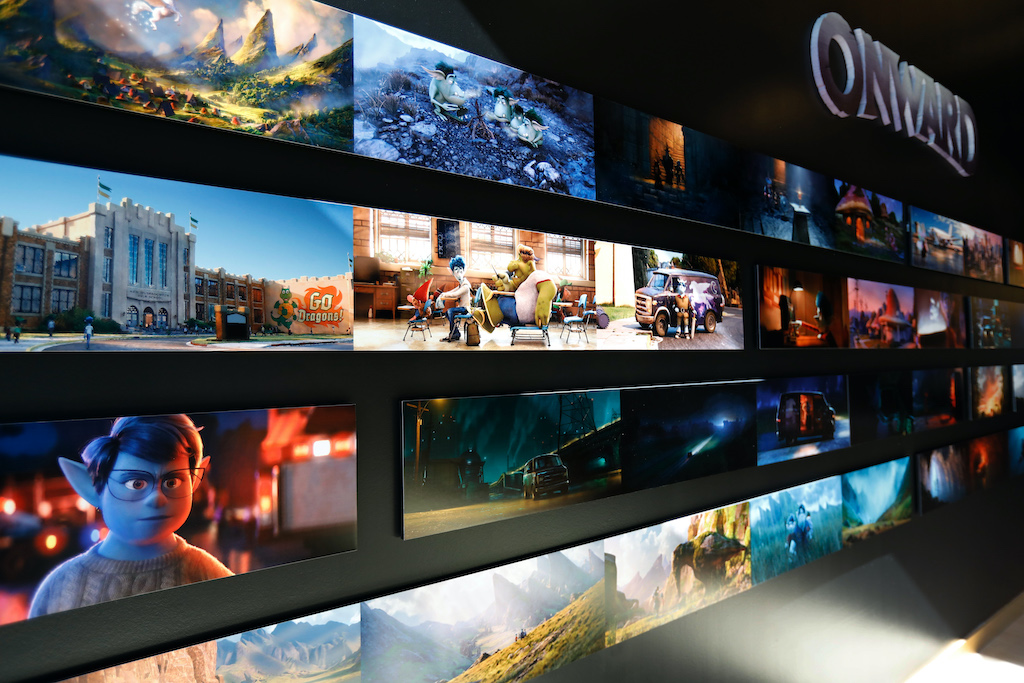 The “Onward” art gallery and atrium art as seen on October 28, 2019 at Pixar Animation Studios in Emeryville, Calif. (Photo by Deborah Coleman / Pixar)

We’re wrapping up our coverage from our recent visit to the Pixar campus with the final installment of our behind the scenes look at Onward. From animation to lighting, to visual effects, we were given the inside scoop of how a Pixar animated film comes together. It truly was an amazing experience for anyone who is a fan of animation. If you missed our first behind the scenes Onward post a couple of weeks back click right here. 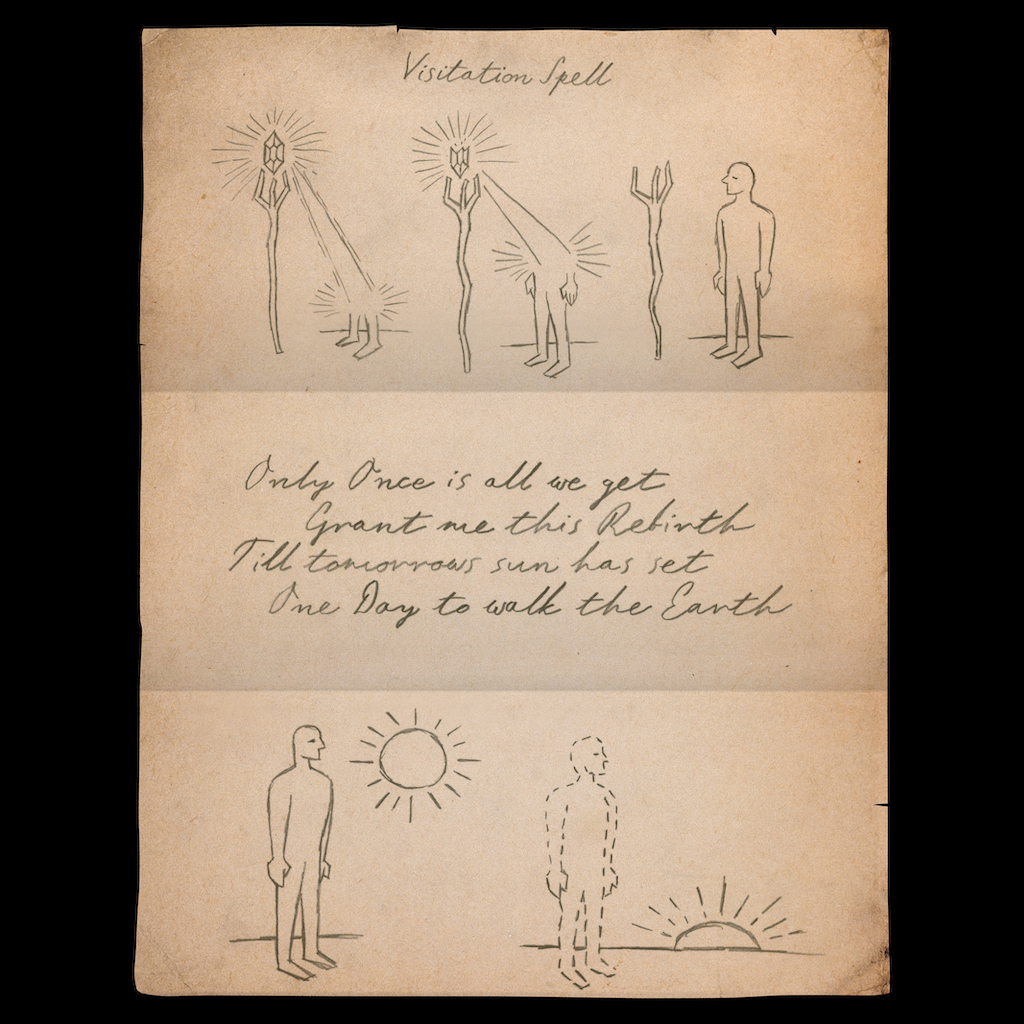 So how were the magical spells from Onward conceived? Louise Smythe (Story Artist) role is to work with the script and bring it to life through her artwork. Her role includes collaborating with Director Dan Scanlon and the writers to help fit the right pieces together for the story. Smythe and her team also had an important role which was to create the magical spells and how the spells would flow when recited. While the team was brainstorming various ideas for spells, they made three rules for the spells. Each spell required “heart fires” which is defined as having “a confidence and a deep belief in what you’re saying” in order for the spell to work. The next is a “magical decree” this was for more mid-level spells, this required a deeper mindset and emotion. The third was an “assist element” this was for bigger scale spells which requires an element or object to complete this spell. Smythe and the team tweaked it from there and felt if a certain spell was too “kidish”, they would utilize a more simple language. It had to be short, no gibberish, and it could not be silly. The outcome of it was simple yet brought the magic to life.

Paul Conrad (Graphic Art Director) presented us with some insight into his role as the graphic designer for the film. Conrad and his team bring fantasy into reality. The details such as the decorations, signs, and brands were created to help the viewers understand the fantasy world the characters live in. Details such a letter written by the characters father to how the books look help tie the story together and give it a more realistic feel in a fantasy world.

Vincent Serritella (Effects Supervisor) faced challenges from the beginning with the question of how do you bring magic to life. The real world portrays magic as invisible, Serritella took the challenge on and brought the magic to life. They treated magic as its own character utilizing stunning visuals to complement the story. Throughout the movie as the character gains confidence, so does the magic it builds along with the character. Serritella added, once they have the choreography, visuals, and mechanics of a shot, they begin to add the effects and everything falls into place. 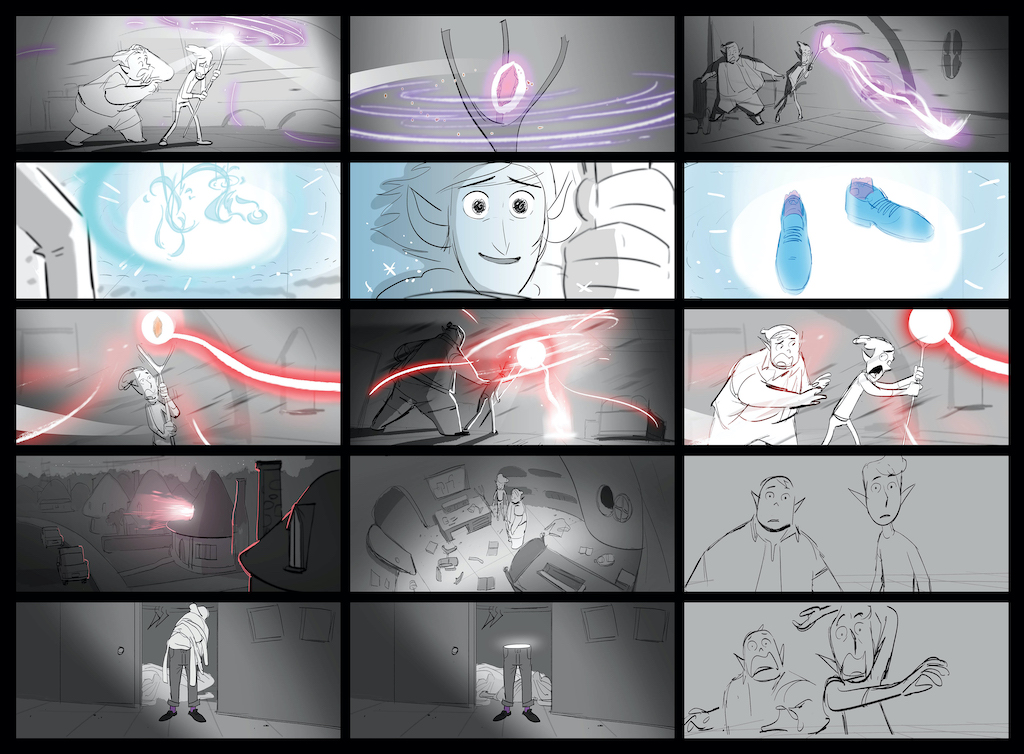 FROM THE FANTASTIC TO THE FAMILIAR (ART/LAYOUT/LIGHTING/EDIT) 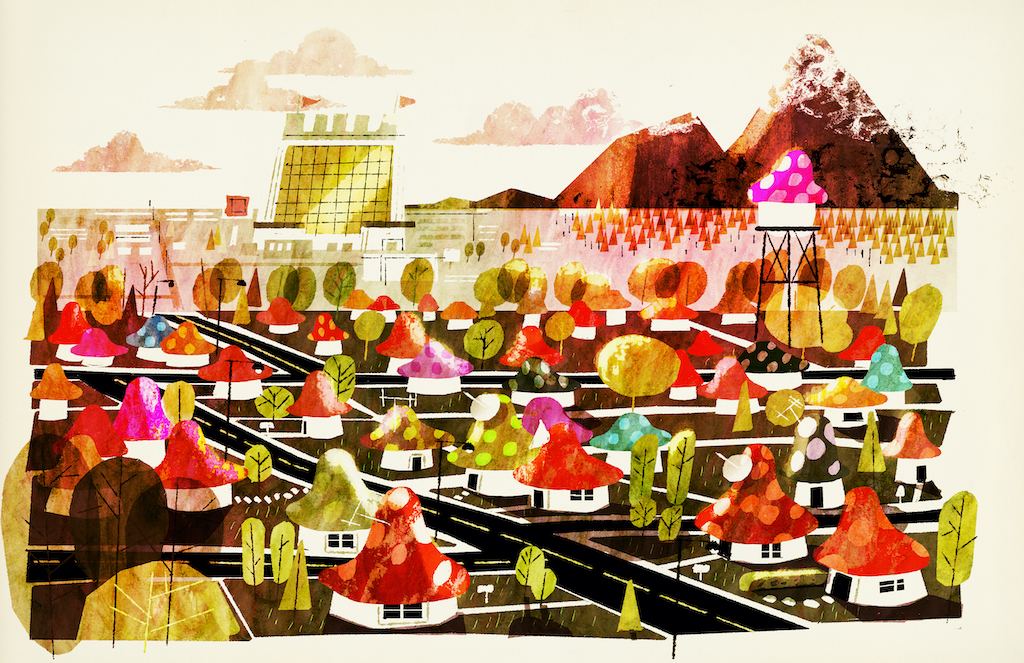 Noah Klocek (Production Designer) takes us on a deeper dive into creating the whimsical fantasy of the present and past. Creating familiarity mixed with fantasy throughout the film was a challenge says Klocek, as he explains the obstacles they faced. To help the audience understand their story through art, they created an “art language.” In order to define the language, Klocek and his team would meet up twice a week for 3 years, gather all the artwork and discuss what works and what didn’t, this was known as an art review. This is how the setting of the movie came to life during an art review. The original idea was to have the movie based in a small town in the midwest, but as ideas and artwork started to flow, they realized the setting was not working out. Klocek actually drew up a new setting and created a metropolis setting this was where the magic started. The modern world was based in Los Angeles, here we start to see a more familiar setting yet they mix in a little fantasy they created a 70/30 balance which was 70% modern 30% magical. As the movie plays you will see how the balance between familiarity and fantasy ties together.

Adam Habib (DP layout) explains how they bring this artwork to life with staging and a virtual camera. Staging is the blueprint for the character’s animators, this helps with the timing and position of each character. By staging the characters, the camera works around them as the emotions change the lenses change. The virtual camera allows Habib and his team to see what the audience will see and how the story will play out. The camera expresses the tug of war between characters, fantasy, and reality. 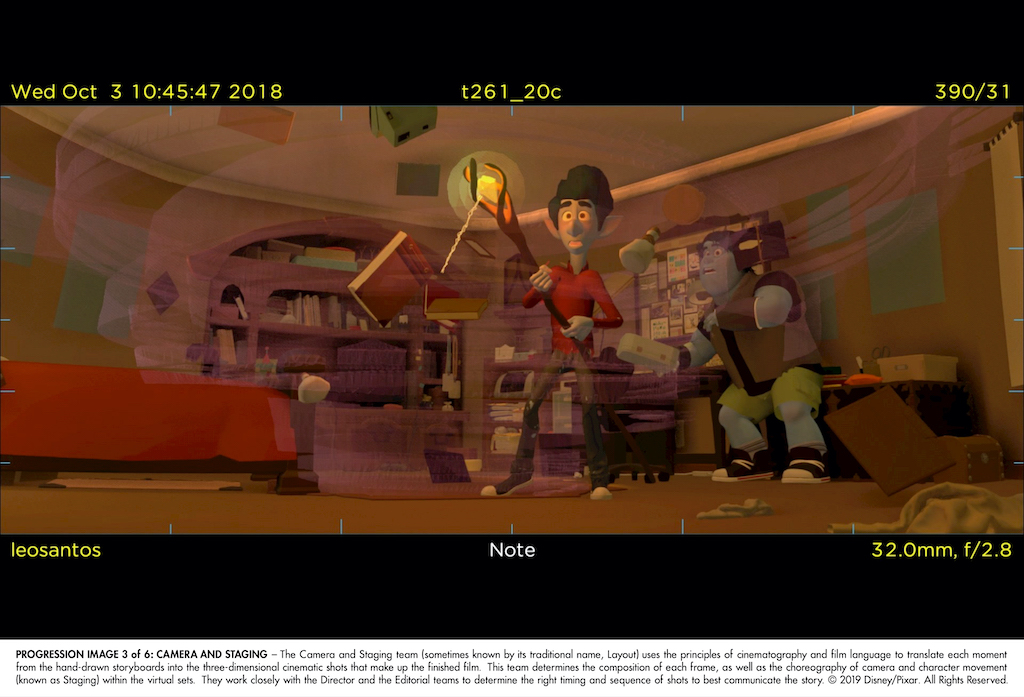 Catherine Apple (Editor) breaks down the editing process they took for the movie. They begin with dialog, followed by sound effects. The challenges they face with this is that they have to create each sound, from the noise in the background to a car starting. This sets the tone for the movie, because Onward was more unique in the sense that it was set as a modern fantasy the sound effects were a key point. Next, they move on to the temp score, this brings the emotions to life. The editing process goes four times through a story review before they add their characters. After they add their characters the process begins they add the emotions and dialog changes to fit the character’s personality.

Johnathan Pytko (Lighting Supervisor) his role brings the art and technical challenges together. They tell the story through light and color. The color tones and light shows how the scenes come to life, the warm colors and harsher tones allow us to feel the mode of the scenes that begin to unfold before our eyes. Lighting provides us with the time-lapse of the day as the characters proceed throughout the movie.

PROGRESSION IMAGE 5 of 6: LIGHTING – The Lighting department helps to integrate all of the elements – characters, sets, effects, etc. – into a final, fully visually realized image. The Lighting process involves placing virtual light sources into the scene to illuminate the characters and the set. Technical artists place the lights to draw the audience’s eye to story points and to create a specific mood. The lit images are then rendered at high resolution. © 2019 Disney/Pixar. All Rights Reserved.

Jeremy Talbot (Character Supervisor) gave us a breakdown of what his department does. Talbot explained that his team takes the hand-drawn 2D art and turns into 3D for the final movie. Talbot explained how it is a collaborative process with all of the other departments for the character’s development. Talbot further stated that the director really wanted the characters to carry and express the emotion of the story. progression of creating the world for Onward (the World gets bigger) Is involved with animation for character testing to see proportions

Allison Rutland (Directing Animator) had a team of 85 animators for Onward. As animators, their role is to create the movement and the performance of the character. Part of their process is to understand where the character came from and why they move the way they do. They look at details such as clothing and how it could restrict a character’s movement. To create a sequence in Disney and Pixar’s Onward, the animation team works with the suggested layout and recorded dialogue to create the physical and emotional character performances. As Rutland explained, some challenges on Onward were animating Dad’s pants. “We had to show the emotion when Ian and dad first meet. We had to try and communicate this really tender moment just by to feet touching each other. It really shows how animation is a collaborative effort”.

Ana Lacaze (Character Shading Art Director) When the characters are sent to our dept they like plastic and when they come out of our dept they look like the characters they’re supposed to be. Shading is the process of representing the material qualities such as how soft, shiny the skin is lumpy, etc… We create materials for shirts, pants and everything else in the film, it is a collaborative process.  We also work with lighting, art, animation. Lacaze also added that some of the challenges were balancing fantasy and reality  when it came to clothing and skin texture. Looking for the familiar in a fantasy setting. 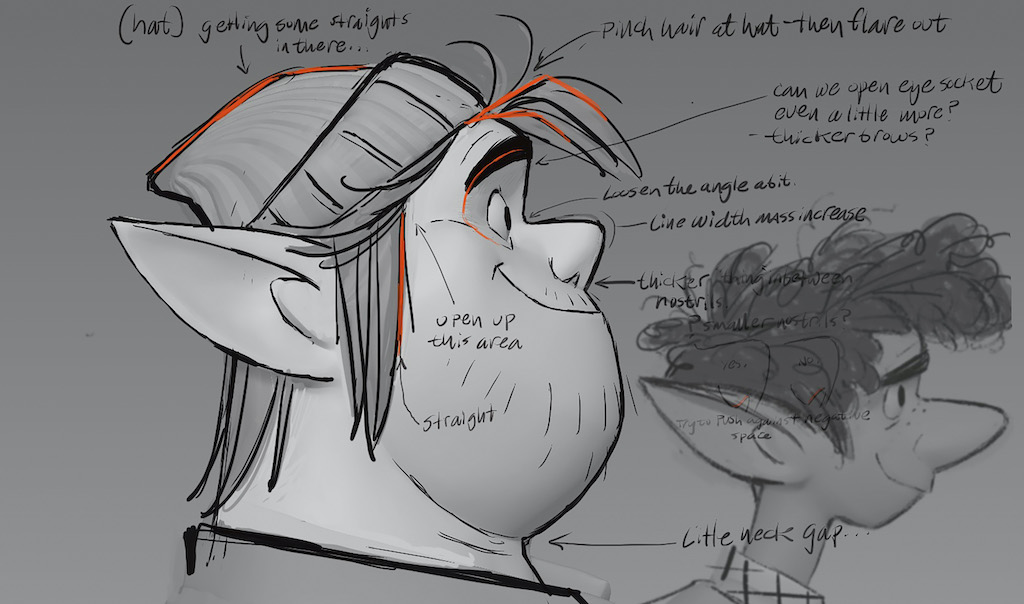 Sequoia Blankenship (Crowds Supervisor) explained to us the importance of crowds and how it adds depth to a film. At times crowds can become a character in a film and help to round out the film as a whole, “Blankenship” added, “It can make the world they are in seem bigger”. 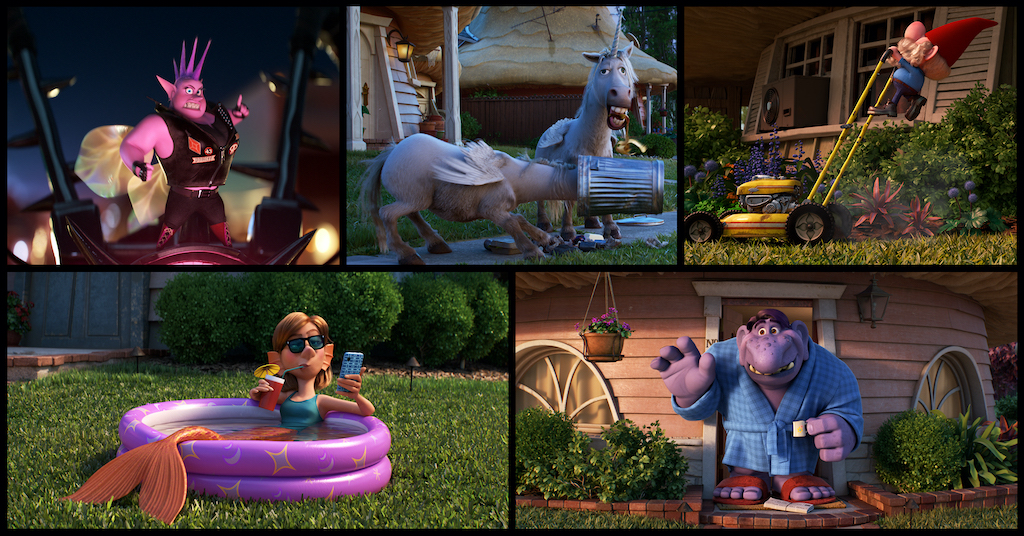 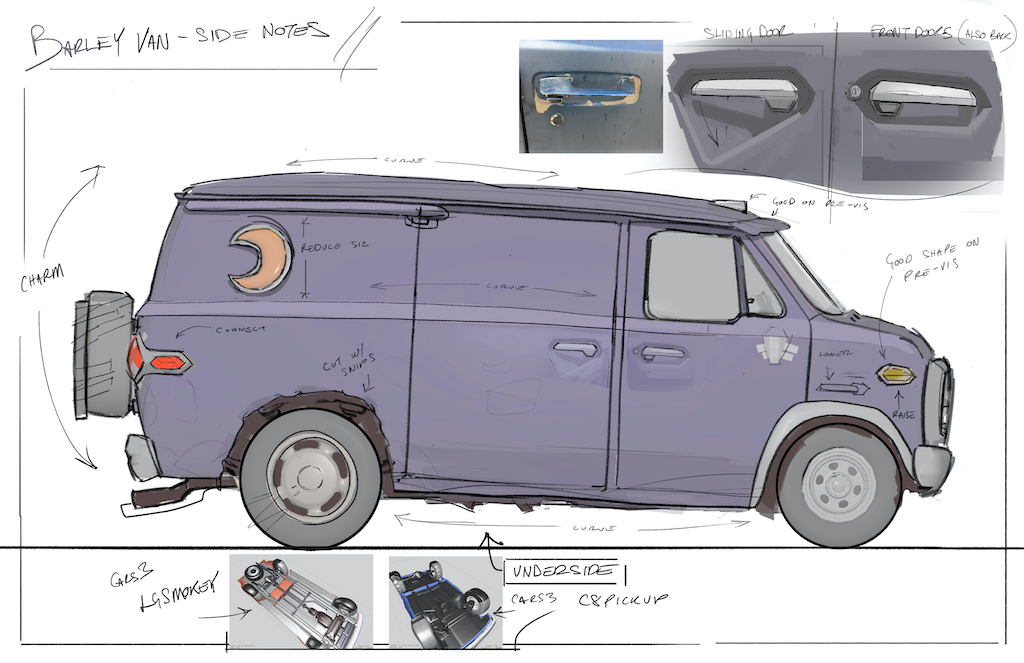 Set in a suburban fantasy world, Disney and Pixar’s “Onward” introduces two teenage elf brothers (voices of Chris Pratt and Tom Holland) who embark on an extraordinary quest to discover if there is still a little magic left out there. Pixar Animation Studios’ all-new original feature film is directed by Dan Scanlon and produced by Kori Rae—the team behind “Monsters University.” “Onward” releases in theaters on March 6, 2020.