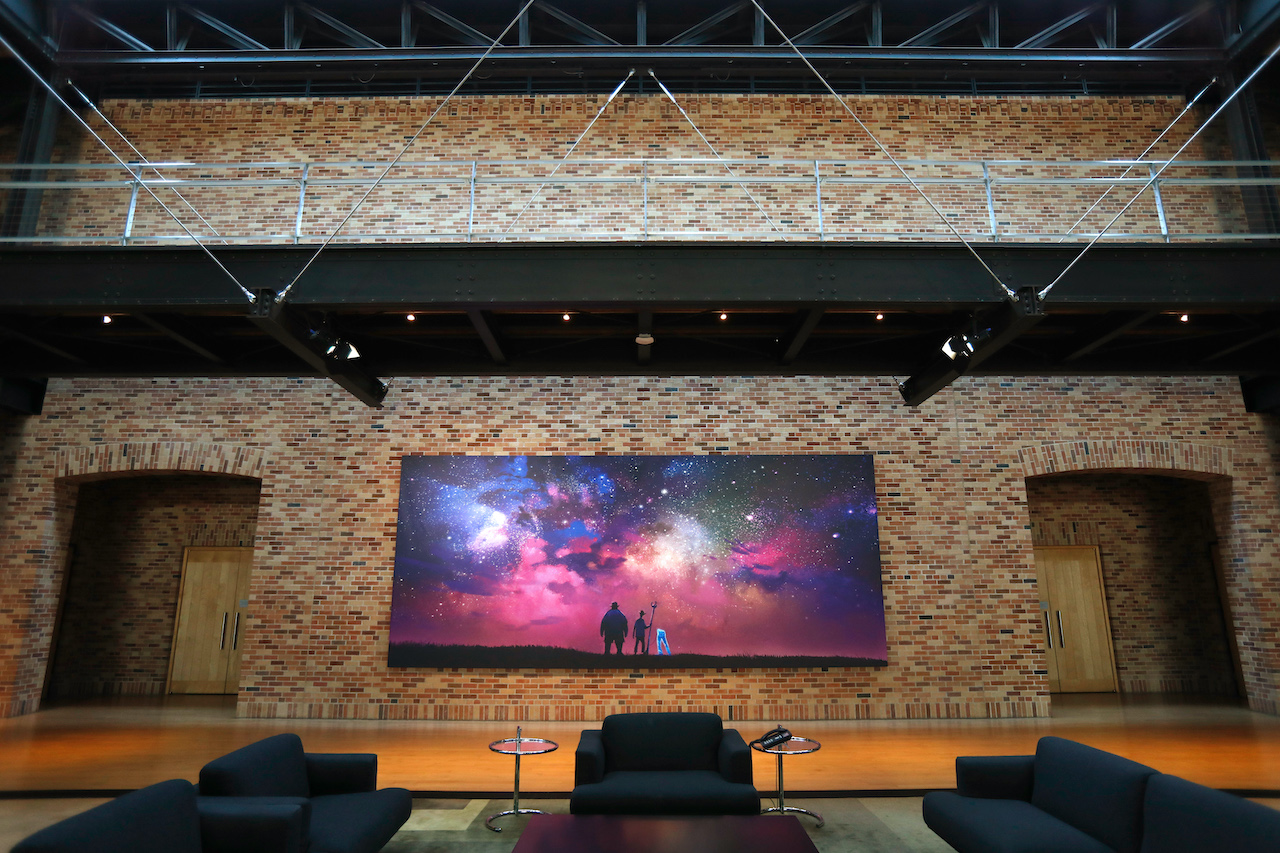 The “Onward” art gallery and atrium art as seen on October 28, 2019 at Pixar Animation Studios in Emeryville, Calif. (Photo by Deborah Coleman / Pixar)

Nuke The Fridge was extremely honored to be invited to the Pixar animation campus to get an awesome look at their newest feature animated film, Onward, coming to theaters March 6th, 2020. Onward is from director Dan Scanlon (Monsters University) which is set in a suburban fantasy world where two elf brothers embark on a quest to spend 24 hours with their dad who’s passed away. As Dan explained,

“The story is inspired by my own relationship with my brother and our connection with our dad who passed away when I was about a year old,” says director Dan Scanlon. “He’s always been a mystery to us. A family member sent us a tape recording of him saying just two words: ‘hello’ and ‘goodbye.’ Two words. But to my brother and me—it was magic.

Although the setting is in a fantasy world of elves, unicorns, centaurs, gnomes, and trolls (Just to name few), magic has unfortunately given way to the modern technology of today’s current time. 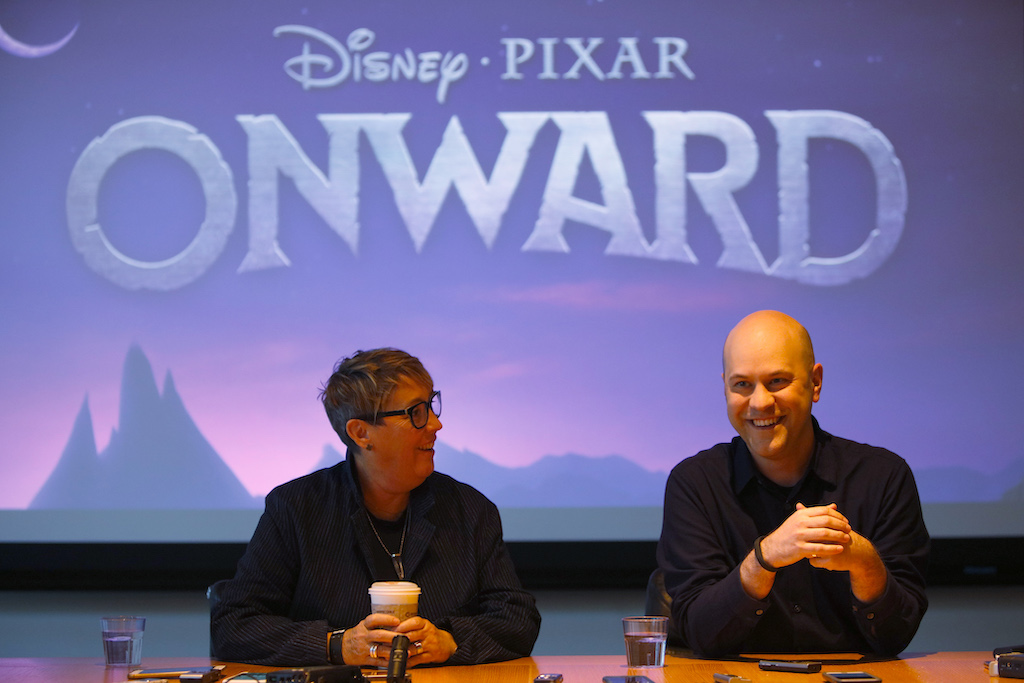 The Onward Press conference with Kori Rae and Dan Scanlon

During our visit to the Pixar campus, we were invited to an intimate press conference with producer Kori Rae and director Dan Scanlon. Scanlon was asked by a member of the press why the story was set in this world? Scanlon responded:

“I started from the personal story first as you know, my father passed away when I was one year old and my brother was only three, I always obviously wondered how he was and how I was like him. Really the idea was, what if I got to meet him and spend a day with him what would my brother and I learn about ourselves and about him. Then the next question was how can you meet someone for a day? That’s what led to magic. I didn’t want to do a period piece, so that’s what led to doing a modern take in a suburban environment.”

I asked Scanlon and Rae if there was anything during the animation process that was technologically challenging or out of reach in regards to animation.

Dan Scanlon: That was exactly Kori’s game plan. If we want these difficult shots, do we really want these other things? You know, you think no, it’s not going to affect the story at all, let’s get rid of that. It allowed us to have big, big moments and the stuff that we lost, you wouldn’t even notice.

Kori Rae: It really is about prioritizing and making sure you’re getting the best bang for your buck. For me, it’s really about what’s going to be most important to the story and I think when you guys see act three (In the film), that was something that was late in coming and because we had been smart in a lot of the choices we made, we were able to put all of our money into that act three climax and it was really great! We didn’t have to say no. That could have been an area by the time we got there and we knew what was going to happen, and what we needed, to make it great, we could have been out of money or out of resources.

Dan Scanlon: (To Korie Rae) You had a save for a rainy day and that rainy day came!

Kori Rae: Yes it did, in act three. 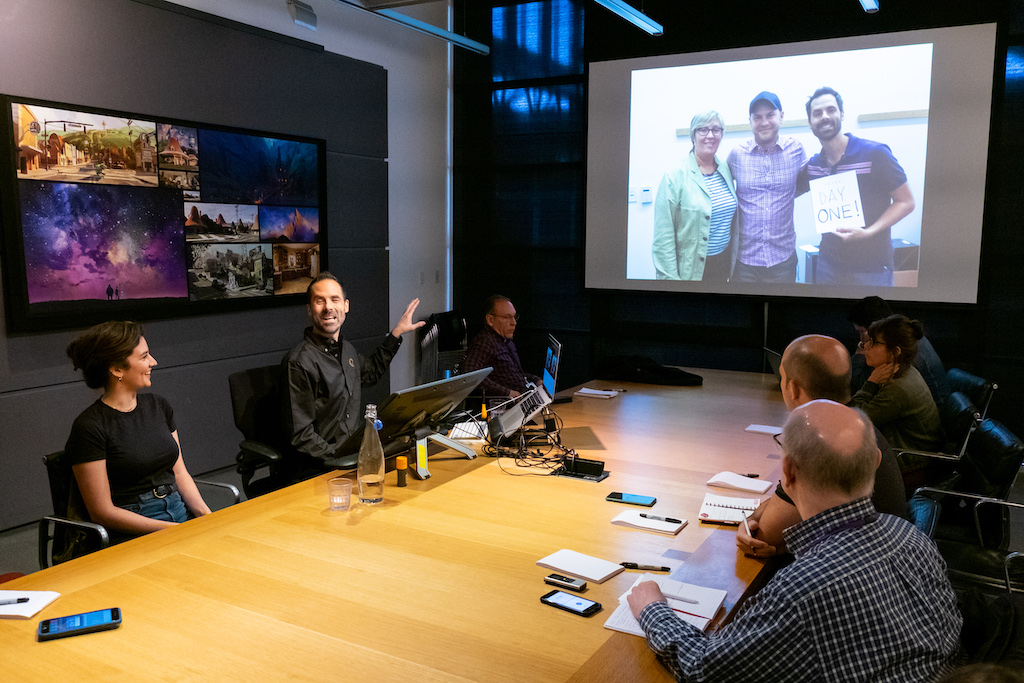 Continuing with our visit to the campus, we had the great opportunity to meet with the storyboard team behind Onward. Kelsey Mann is the story supervisor for the film and Madeline Sharafian is the story lead. The team gave us some insight into their crucial role in developing the visuals for Onward.  Mann explained his role is to lead a group of 6 to 10 storyboard artists who help the director, producer, and writer tell a compelling story through visuals. “We draw the film from beginning to end”.  These artists are a crucial part of the animation team which helps the director achieve their vision.  Madeline Sharafin explained her role as a story lead was that of a storyboard artist in addition to taking on several other duties including checking other artist’s work as well as being a part of the script-writing process.

We were given a very entertaining demo of the pitch process in which Madeline showed us how an artist will “act out” a sequence through storyboards. The process is done while other storyboard artists, the director, producer, and writer(s) are in the room. The demonstration was very entertaining and also a great display of the very talented artists who call Pixar home. 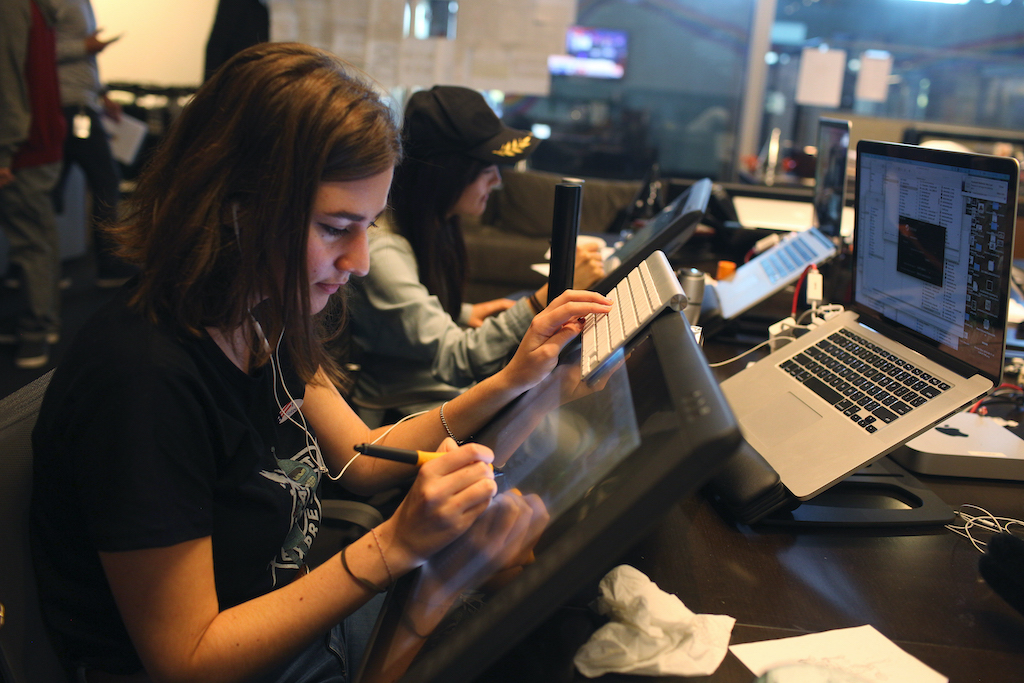 Onward story team members, including Madeline Sharafian, work in the “fishbowl,” a common work space for everyone to be together while working, as seen on November 8, 2016, at Pixar Animation Studios in Emeryville, Calif. (Photo by Deborah Coleman / Pixar) 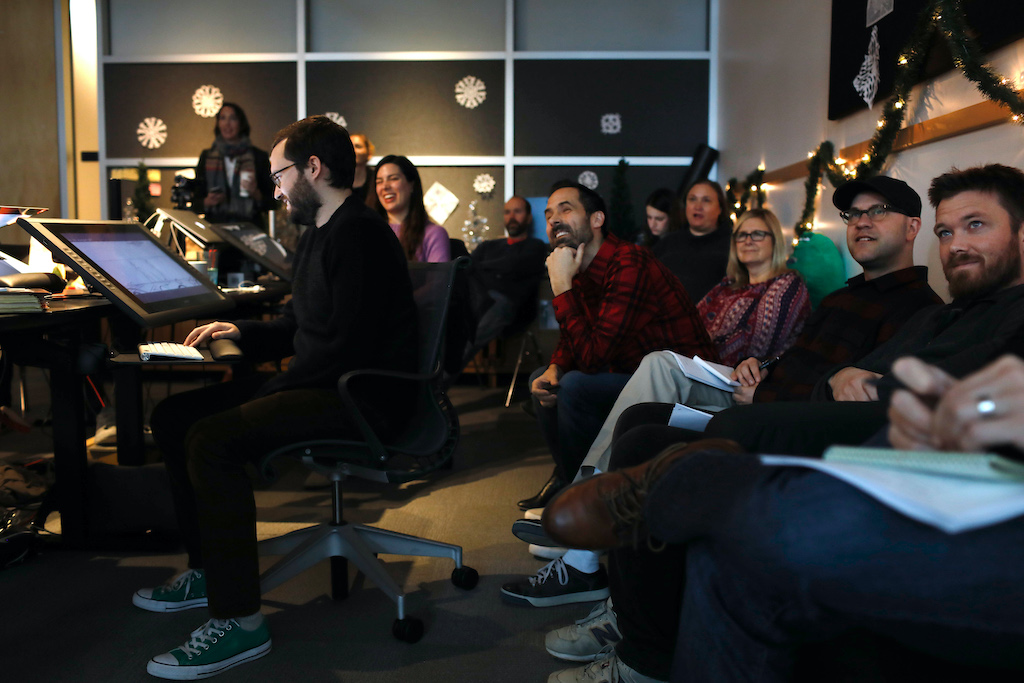 An Onward story review, as seen on December 14, 2018, at Pixar Animation Studios in Emeryville, Calif. (Photo by Deborah Coleman / Pixar)

Stay Tuned, we have more coverage from our visit coming very soon!

Onward will magically appear in theatres on March 6th, 2020.