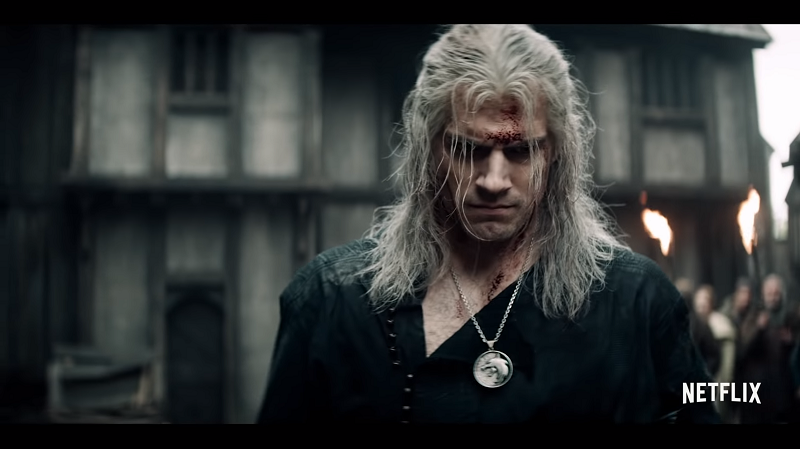 The NTF team is pretty excited for the release of Netflix’s The Witcher series later this year. While we didn’t make the Hall H panel at San Diego Comic-Con where the cast talked about the series as well as revealing the very first trailer for the series, we did get the chance to chat with Showrunner Lauren S Hissrich, Freya Allan (Princess Ciri) and Anya Chalotra (Yennefer of Vengerberg) about the series.

As the panel happened before the interviews, I was lucky enough to watch the trailer right before and I have to say I was quite impressed with what I saw and gave us a hint of what’s to come. If you haven’t seen it yet, I have it linked at the bottom so make sure to check it out.

Up first we got to talk with Lauren S Hissrich about working on the series and the stories we will get to enjoy when the series comes out.

Q: I think we got our first glimpse of Duny today, in a scene reminiscent of Question of Price. Do you want to say anything about Duny, and who that plain dude was?

Q: There’s another scene where we saw Ciri encountering a band of warriors in the forest. Was this band the Scoia’tael or…?

Lauren: That was not the Scoia’tael, that was the dryads. So we’re taking a journey to Brooklyn Forest this season.

Q: The Witcher series is a beloved franchise with a devoted  following. What kind of reactions have you gotten so far?

Lauren: I’ve been on the show for 2 years now. When I first came on, it was like who are you and why are you adapting this? It was one of the reasons I hopped onto twitter from the beginning. I love engaging with fans, and it has such a beloved fan base. I don’t see that fan base as enemies, I see that fan base as either fans or people to win over and to say this show is for you too. I’m not here to change anything. Fast forward, and Holly was pretty buzzing after that. I think fans will be very happy.

Q: It looks like the show will focus on 3 characters. So why do you think the relationship is so appealing to this story?

Lauren: I think everyone’s heard me refer to them as a disjointed family. What’s so great about exploring these stories is meeting them all individually. So we get to know Ciri, and we get to know Yennefer, and we get to know Gerald before they ever have a chance to intersect, so you really get a chance to understand who these characters are. To me, the important thing is what happens when they meet each other and how they change each other. And I really want to see that whole process.s also I think they’re a great thematic scene to play. A lot of time, the family that means the most to you is the one that you have to find and seek out yourself, and not blood. It’s the people you need in your life.

Q: During your panel, it sounds like we’ll see a bit more depth and fleshing out in a flashback in the books. Do you perhaps have specific visions in your head about a young sorceress named Visenna dropping off a baby at a Witcher school, and how that baby would one day be forced to undergo very dangerous trials that not all young children will survive and will one day become Geralt of Rivia?

Lauren: I won’t spoil anything. The books are written with a ton of flashback. What we do is take that flashback and make it present day storytelling.

Q: So Henry is a big fan of the story, and that doesn’t always happen with the lead. How does that change the story?

Lauren: What’s great about Henry is that he’s all in. As soon as he was cast, he’d send photos about which wigs or lens to wear. He understands what fans are looking for, aside from the acting challenges. He’d sometimes come to me and say ‘I love this great scene that you’ve written, but what about this line from the book? It’s a very meaningful, is there any chance we can throw that in dialogue?’ He’s been a great resource for me.

Q: What do you think is the biggest impact he’s had, one change he’s suggested?

Lauren: There wasn’t one thing. Probably the one thing he influenced the most. He says less than I’d imagined. The first draft had him talking a lot, and we started cutting lines in post. And it was Henry who said ‘I just don’t think I need to say as much. I can invoke this character much better if I say less.’ And he was right.

Q: Is there a grain of truth to every fairy tale?

Lauren: Yes, especially in Season 1. There are a lot of fairy tale allusions. It’ll be interesting to see if fans of the source material who’ve read everything will pick it up.

Q: Everyone on Netflix says that The Witcher is the answer to Game of Thrones. What do you think about that?

Lauren: I don’t think we have to be the answer to anything. I’m a huge fan of Game of Thrones, and whenever someone asks me if we’re the next Game of Thrones, my answer is always the same. I hope we’re as successful as Game of Thrones, I hope that we can bring an audience in that maybe doesn’t think this show is for them or isn’t into fantasy or magic or monsters. I think that’s what Game of Thrones did, and opened a ton of doors for fantasy stories. It’s not very kids, but everyone else.

Q: One of the things that struck me was the vision language and how detailed the production design was. Can you talk about shaping the look of The Witcher. You have a lot to go off of with the books or games. Did you borrow anything from that, what was your process?

Lauren: So our first step was go to the books. But what’s great is, because there’s a video game and a lot of CG, one of our challenges was, what could we do without CG? How can we go into an environment and make it ours. So we were on the road a lot in the dead of winter in central Europe. A lot of the challenges was taking an existing environment and making it ours. But that’s also part of the fun .There’s a specific scene in episode 2 where Geralt is walking with Roach, and my husband said no one’s going to believe that’s real. And I was like, I hiked up that mountain, it was REAL. I think it’s a pretty incredible and big world that we’ve created.

Q: Going off of that, as you said, it seems like you’ve really focused on practical effects and doing as much in camera as possible. But I did also noticed some of the visual effects was very impressive, and it wasn’t something that’s usually seen on television. How was it working with the VFX team and bringing these creatures to life?

Lauren: It’s fantastic, specifically to monsters for a second. We start with me describing the monsters in a script, I talk to Andrew Law who’s our production designer and does our creature concepts, and then we transfer those over to VFX and they start animating and building them. What’s amazing to me is just how creepy they are. Can we add hair to it’s legs? Absolutely. It was such a team effort in everything.

Q: Did Henry ever think of names for the stories?

Lauren: Not at all.

Make sure to also check out our interviews with Freya Allan and Anya Chalotra.