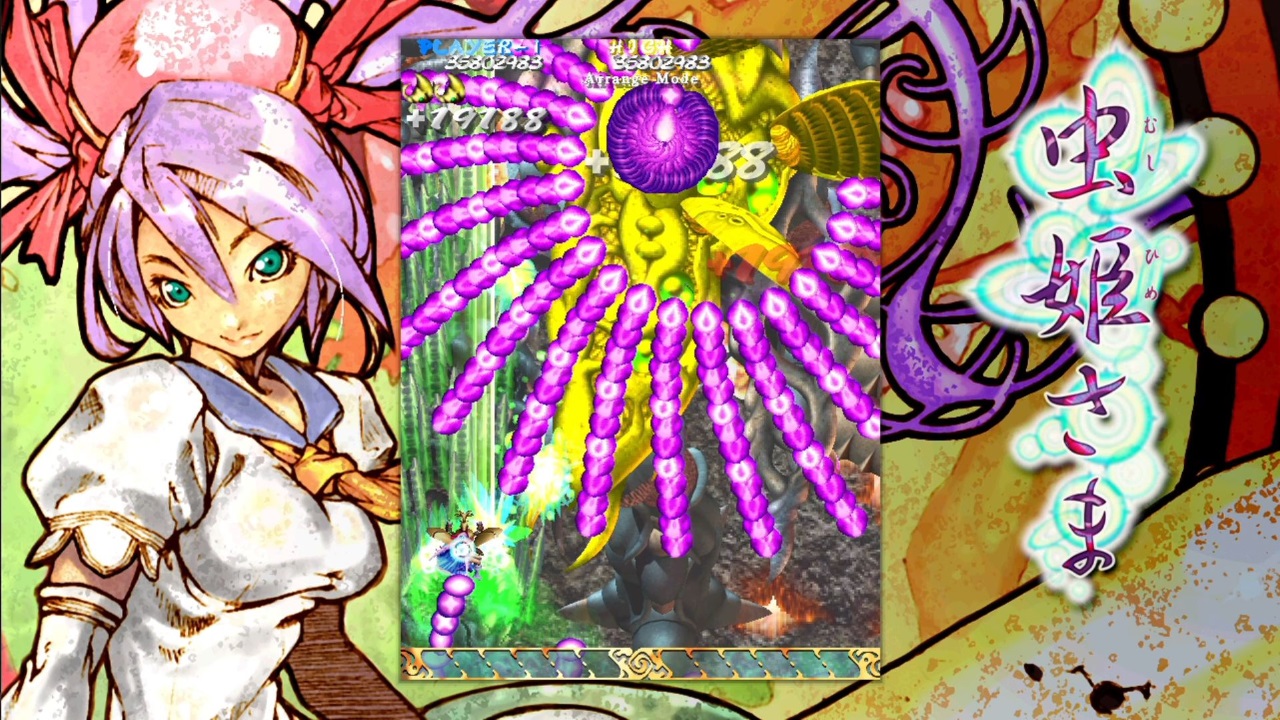 Initially released back in 2004, Mushihimesama was met will generally positive reactions. Developed by Cave the game would make the console jump with ports onto PS2, iOS, PC, Xbox 360 over the years and eventually it came back full circle with the Nintendo Switch. The Nintendo Switch has been known to receive some immaculate arcade ports over the years so this seems like a fitting pair.

The end results offer quite arguably the best version of this game to date.

The world of Mushihimesama is a wild, untainted one where large desertic areas abruptly change into lush forests, all inhabited by arthropods called Koujuu: such beasts (basically oversized insects) are capable of surviving due to their hardened shells and, upon their deaths, leave them behind for vegetation to grow around them, in a natural cycle of life and death. However, their life force, called Levi-Sense, proved to be poisonous to humans to the point of being named the Miasma; only sparse human settlements were allowed to survive, one of them being the Hoshifuri village, in exchange for the sacrifice of a 15-year-old girl every 200 years. However, the daughter of the royal family, Reco, is apparently the next in line after being given an ornate bracelet by a mysterious boy in Shinju Forest, where she lost herself at a young age: by the day she turns 15, the Miasma contaminates the village. In order to save her people, she enters Shinju Forest once more, riding the golden Koujuu beetle Kiniro (with which the golden bracelet grants a telepathic link) on a quest to meet the Koujuu god himself. -Mushihimesama Wiki

Mushihimesama has a very dark and desolate world albeit a little convoluted. The story follows Reco who is destined to die but rather than admitting defeat and giving in to tradition she takes flight to end this bug infestation. In most shoot-em-ups I don’t feel bothered to dig deeper into the lore but in this title I felt it was necessary to know why the main character goes berserk on a colony of bug enemies. 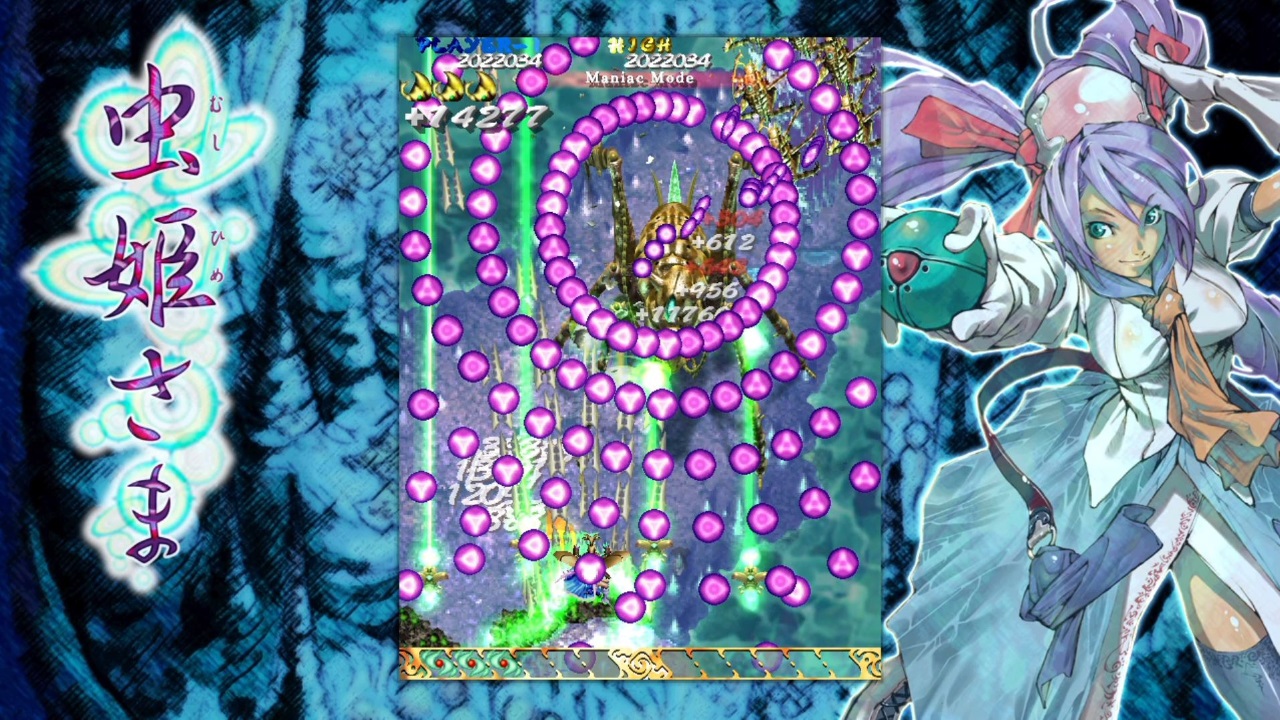 I found myself enjoying the game a little bit more once I had taken the time to read up on it.

Theres not too many differences between Mushihimesama and the slough of arcade shoot-em-up ports from years past but there is a distinct difference in how it controls.

The game does not have a dodge feature which would have been nice when you don’t excel at dodging shots but it’s just my humble opinion. The game has a nice pace as it doesn’t go too fast or too slow like similar titles. Reco has a very small hit box which is a godsend, so many titles have faltered due to having an oversized frame causing you to die to a single pixel so it feels good to be able to fly from side to side without the looming terror of a rogue projectile.

The developers absolutely had the same sentiment in mind as maneuvering through the bullets feels much more doable. 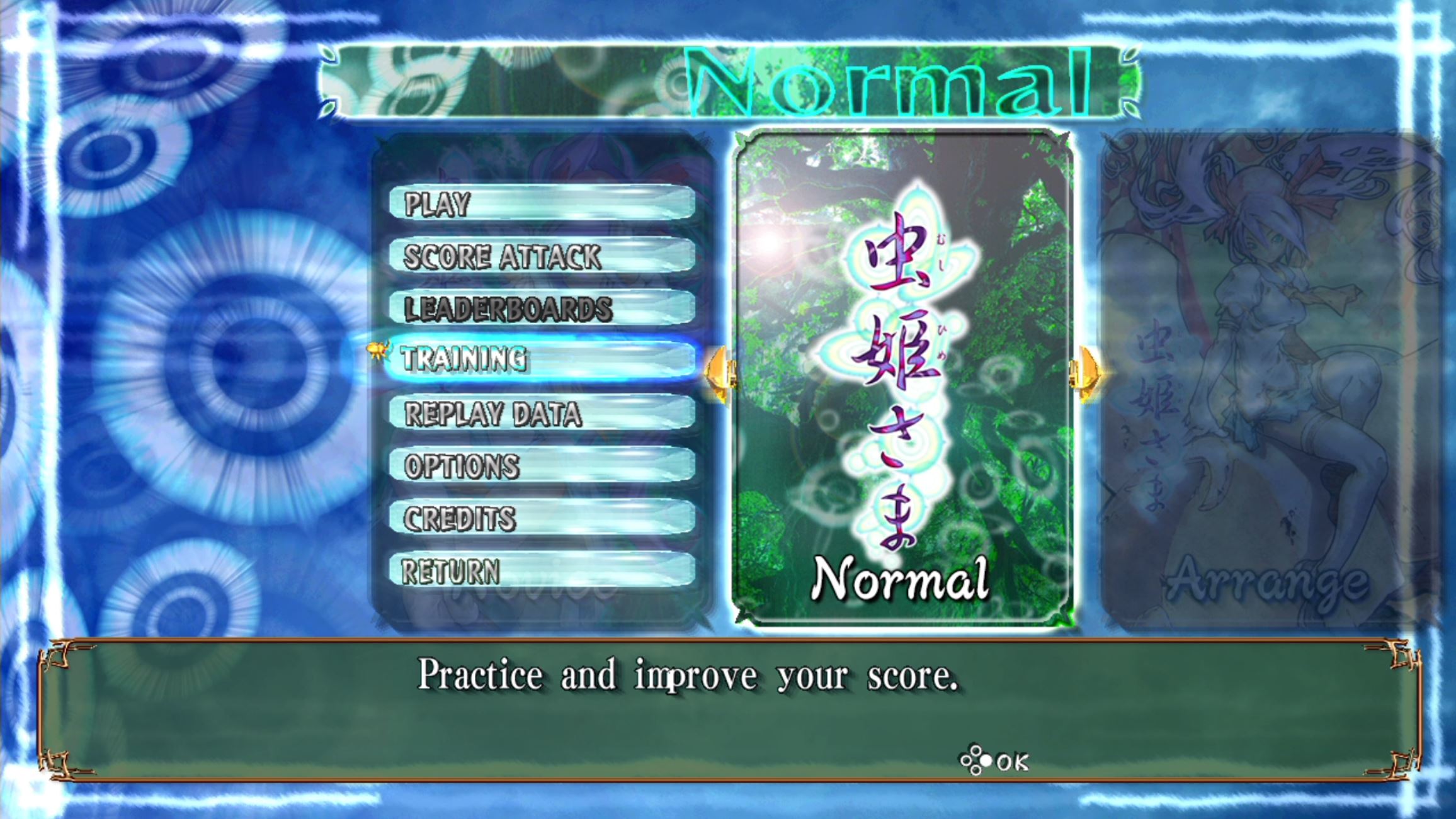 Mushihimesama is jam packed with alternative content including different modes and difficulties to raise your game and have you ducking and dodging through enemy projectiles like a champ with tip top speed. I attempted Maniac Mode and lasted around half way through the first stage so I have the power to say that it is indeed a challenge that requires much practice in training mode.

Not only is this version of Mushihimesama the definitive version due to the Nintendo Switch’s portability it also has some excellent settings to offer players unique playthroughs in a much more technical way. Due to the Nintendo’s tablet display when undocked you can adjust the screens resolution to match the verticality of the touch pad making it play without requiring a bordered screen.

The versatility of the games display settings allow for game zooming, optional borders, and a slough of options to make your bug massacre just a little more tailor made to your liking. 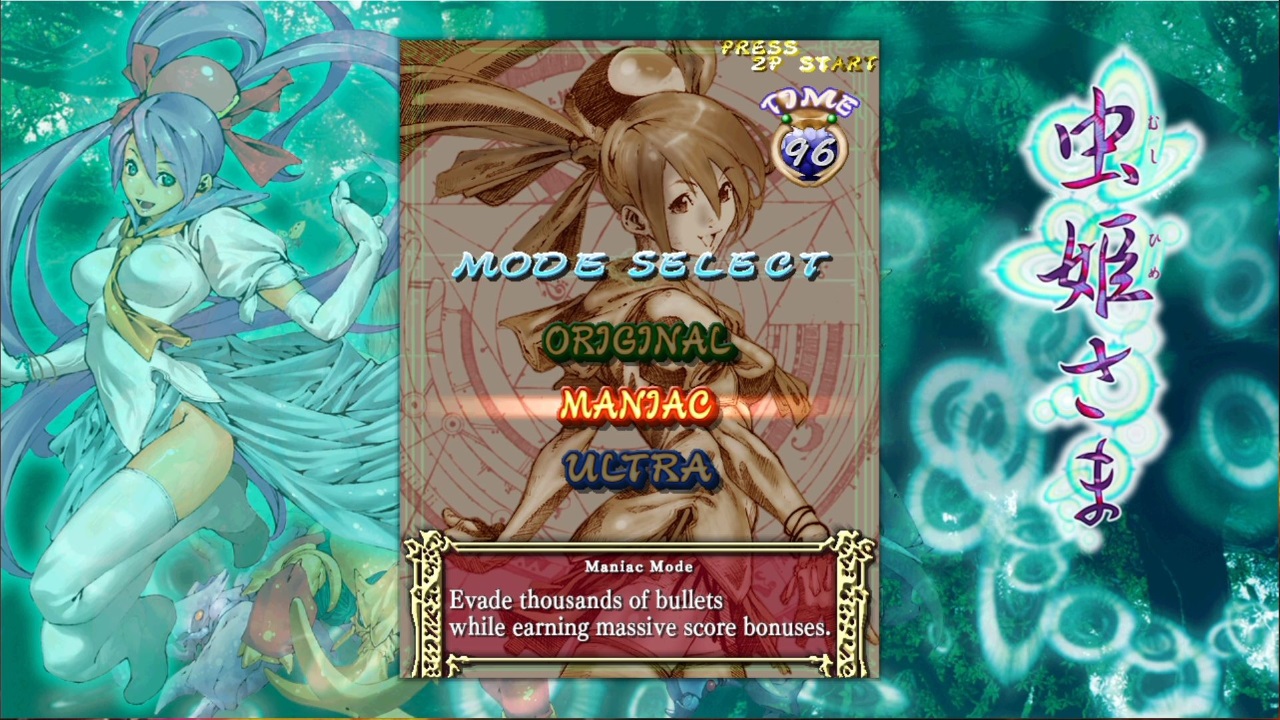 This version of Mushihimesama also includes Arranged Mode and Ver 1.5 which includes readjusted sounds and tunes to not only improve upon the original but to give players the choice to play as they wish. I must say the soundtrack for this game is incredibly beautiful and while nothing really stands out where you’ll be looking for it on Spotify it just works for each stage tiptoeing between urgent and chill tones.

Mushihimesama on Nintendo Switch is easily the best way to play this game by a country mile. Not only is this game packed with replayability but the options that this title boasts makes it one of the most accessible arcade ports on the system. I don’t see casual players flocking to pick this up let alone replay this title over and over with the vast landscape of arcade ports but at 20 dollars USD this game is a no brainer for those who enjoy shmups.