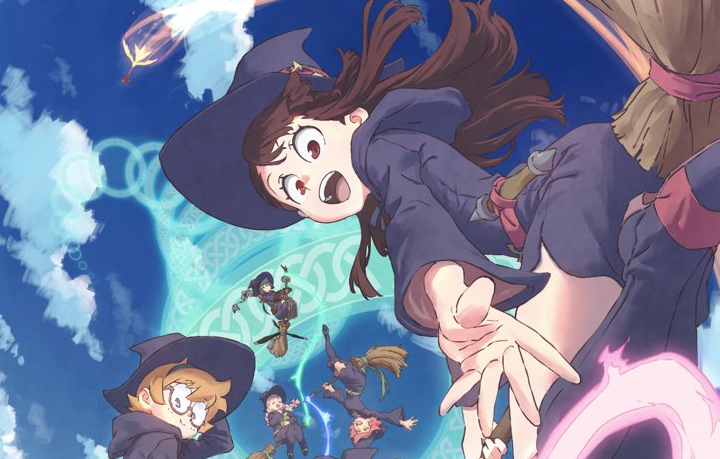 Upon starting up Little Witch Academia: VR Broom Racing you can feel a sense of what the creator Yoh Yoshinari has created throughout the anime series with cute whimsicality flying around an Earthly realm. Nothing more encapsulates that idea than the opening movie you are treated with in VR Broom Racing unfortunately though from that point onward the feeling is fleeting and nearly non existent.

Not Swept Off My Feet

Advertised and lives up to the name, VR Broom Racing allows you(the player) to explore Luna Nova Magical Academy as a guest in order to help burn off excess magic that could potential destroy the entire school. In the process you meet the cast of the series one by one in the form of endearing but painfully annoying dialog.

What makes these encounters painfully annoying is the fact that you must look at whoever is talking to advance the speech bubble regardless of how many characters are in one scene. This juggling becomes annoying when you must continue to turn your head constantly to keep up with conversations.

At no point during my playthroughs did I find a moment in which I felt as invested in the world than I would while watching the anime.

Graphics for the game change between very cute character models with fantastic voice acting from the cast with a contained environment to these bare bones looking racing levels that feel like they should be on the scope of 1996’s Nights Into Dreams but feels less thought out and much more robotic which is ironic for a game that precedes it by nearly 30 years.

This sort of issue is only due to the vr controls and while the anime series itself is incredibly charming, the transition to virtual reality really drains the show of much of its quirky nature and leaves it a robotic shell with all substance no flash.

VR Broom Racing is exactly what it says it is: racing in the air with magical girls in virtual reality. Each level is different with different maps and obstacles blocking your way as you try to navigate your broomstick through Superman 64 styled rings while also racing other students. The game has a slight tinge of Mario Kart as there are several spells inside boxes that you can use to boost up your speed or slow down enemies.

There are certain variations of the formula that act more like obstacle courses or even shooting ranges but with the speed and reliability of your movements it never goes anywhere you want it to.

I feel like the only time I had any feeling of unfiltered, whimsical, and curious fun was learning the ropes and getting my feet off the ground for the first time. After the extremely short honeymoon period you begin to fight something worse, the controls. One hand controls the broom positioning while the other hand is entirely used for shooting at enemies and casting your spells.

I’d like to think I can handle motion sickness. I actively attempt to try rollercoasters, I don’t throw up from motion sickness but I can’t help but mention that some of the later levels, with the amount of multitasking required to complete levels, are extremely disorienting and do not offer a fun or beautiful experience.

Once you survive a round of whipping your head around a rainbow road you are then rewarded with currency obtained by completing challenges, beating time records, and reaching first place. You are then back in your room to upgrade your broom by purchasing upgrades that you can then attach to different types of brooms.

Online multiplayer is planned to arrive to VR Broom Racing soon so the most you can do with this game is practice against bots for the time being although I wouldn’t expect a packed server with the size of the player base.

Little Witch Academia: VR Broom Racing is another example of an anime game that doesn’t offer anything fun outside of the world they’re trying to bring to life. All of the excellent dialogue, music, and story are bogged down by a frankly boring on-rail racing game that doesn’t have its own identity while also containing all the awkward model movements and control problems that you’d expect in early vr titles.

All around the game feels disingenuous in most of its aspects and doesn’t feel like a game that should be worth $30 unless you are an avid fan of the series and you just have to pick this up to hear Akko and friends one more time.

VR Broom Racing did not sweep me off my feet.