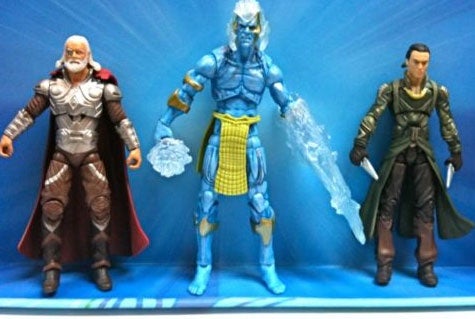 “Thor” director Kenneth Branagh has discussed the villains that the “Thunder God” will do battle with in the soon to be released Marvel action flick.  Three villains will make themselves known  between the likes of Midgard (Earth) and Asgard (Home to the Norse Gods.)   Branagh provided more details about the villains.

The first villain is Thor’s half brother Loki.  He is the adopted son of Asgard ruler Odin.  Loki is known as the God of Mischief, but his real motive lies in defeating his Uru hammer throwing brother and usurping Odin to take the thrown of Asgard for himself.

Branagh talked about the second villain(s) as being some of the Asgardians most legendary foes:

“The story involves a clash with an ice planet, and the frost giants who live therein. They – as might be suggested by the name – are enormous creatures of incredible power who have been robbed of their power and glory by Odin, Thor’s father. What fuels a lot of this intense battle is revenge. This is an angry race, trying to get back at Thor and the Asgardians, the self-proclaimed guardians of the universe.”

The third and final villain is called The Destroyer.  It’s an enchanted suit of armor, which stands over nine feet tall.  If a sentient being gets within arms reach of The Destroyer, their life essence is transferred into the armor activating it.  The Destroyer is able to grow in size, as well as, shoot flames and fire a disintegrating beam from its visor.  Branagh continued:

“This series of metal bands form a giant, walking beast and open to reveal terrifying firepower. In the right hands, this incredibly powerful device – awesome in its killing quality – is potentially a creature of extraordinary protective powers. In the wrong hands, it is a nightmare.”