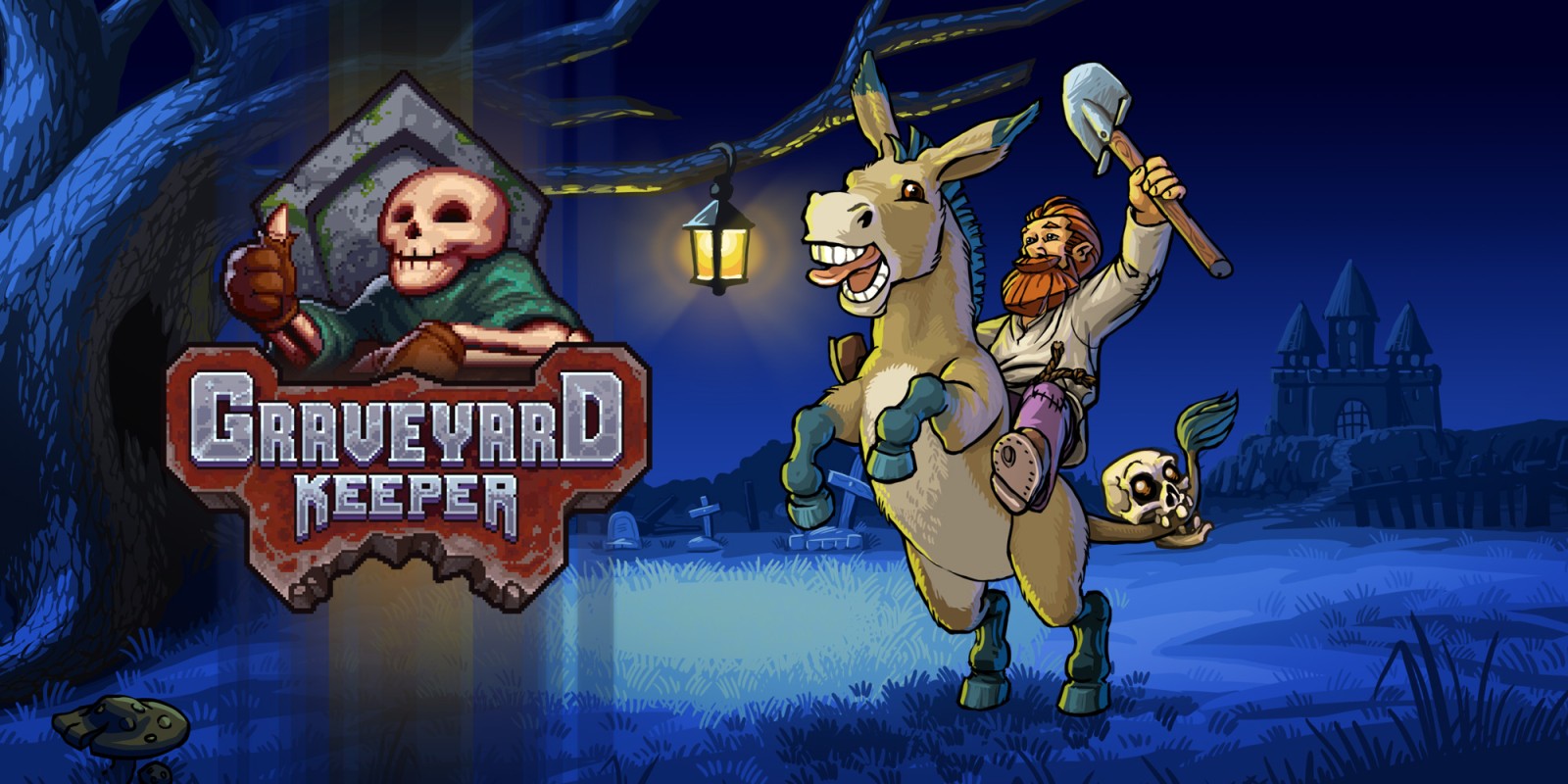 Graveyard Keeper, from developer Lazy Bear Games and publisher tinyBuild Games, puts you in charge of a graveyard of course, and keeping your graveyard in working order is your main goal. It is often compared to Stardew Valley and rightfully so due to its management sim-like tendencies. If you aren’t a fan of those types of games then Graveyard Keeper is probably not the game for you.

Unlike Stardey Valley where you craft a farm and trade, also being in a glorious and happy world, in Graveyard Keeper you are obviously in a much gloomier setting. Despite this setting, Graveyard Keeper has many humorous moments with both characters and dialogue producing some chuckle-worthy moments. Even more morbid actions like selling human meat is done with a tongue-in-cheek attitude. It is more than aware of its subject matter, but it keeps the proceedings funny throughout. 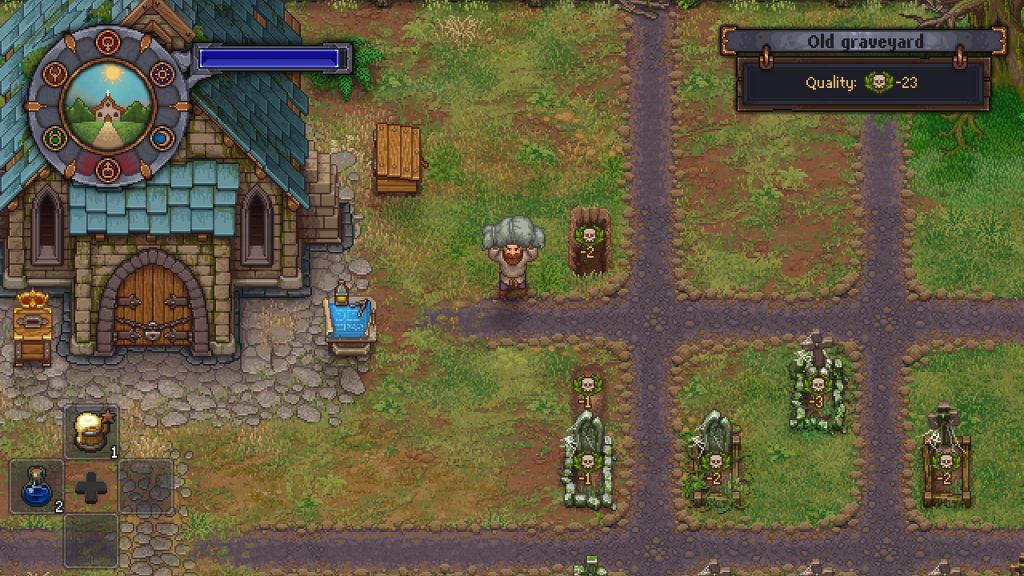 There is a great amount of content with Graveyard Keeper with problems to solve and mysteries to find. Aside from working on your graveyard, you can write sermons, fish, complete quests, and perform many other activities. Most of these tasks are well designed and fun to participate in. There is a lot of variety at play here which prevents monotony from settling in, as you can easily switch out what particular areas of the game you are focusing on day by day. I found that Graveyard Keeper really did hook me into a cycle of one more day again and again, and before I knew it I needed to get some sleep.

Unfortunately, it isn’t all positive though as the energy bar you have to monitor is one issue I had with performing tasks. It was just too small and depleted so quickly that sometimes it was impossible to complete too many tasks before you have to rest. Most of the time it felt like a grind to accomplish most tasks and took away from the experience because of how much you have to wait just for your gauge to refill. When you play a management sim title like this you want to keep up and go from one task to another without having to wait to replenish your stamina meter. 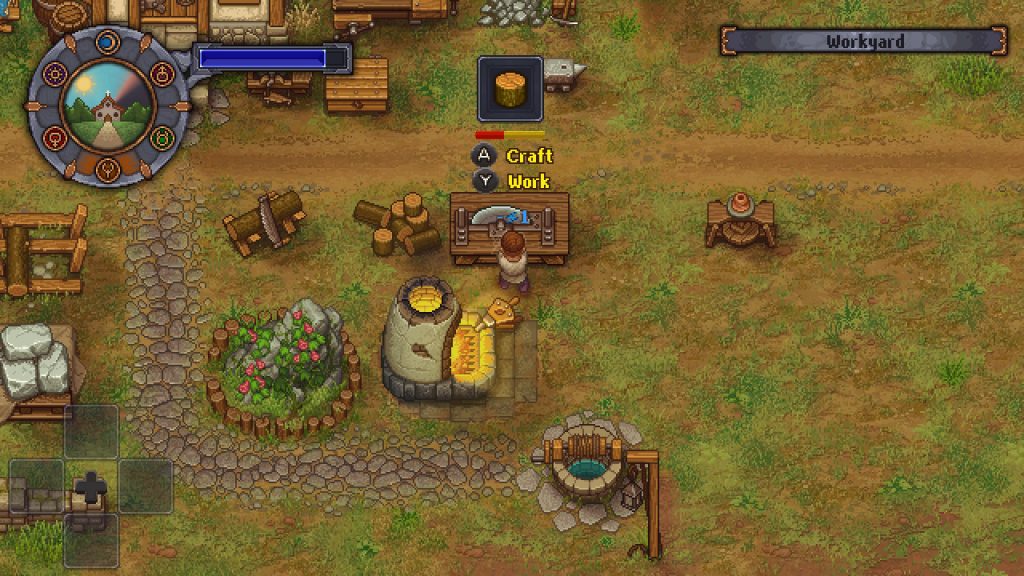 An even larger barrier I found, which Stardew Valley handled much more effectively, was the lack of direction you are given. While goals are clear, how to complete them is a total mystery most of the time. For example, there is no guidance on how to farm and you are left totally in the dark with no clues or tips given in order to accomplish some objectives. This means if you have a quest or task which requires some farm work, you might have to look online to find out the best way to perform it which isn’t good game design.

Alternatively, you have to repair your graveyard, but again you will have no idea on how to do it. This quickly moves away from a challenge and instead becomes a problem solving endeavor which can be frustrating. It will all click eventually by using online guides, but it doesn’t change the problem of having an integrated tutorial section. In the end, Graveyard Keeper demands a lot of effort if you want to get the most from the experience. 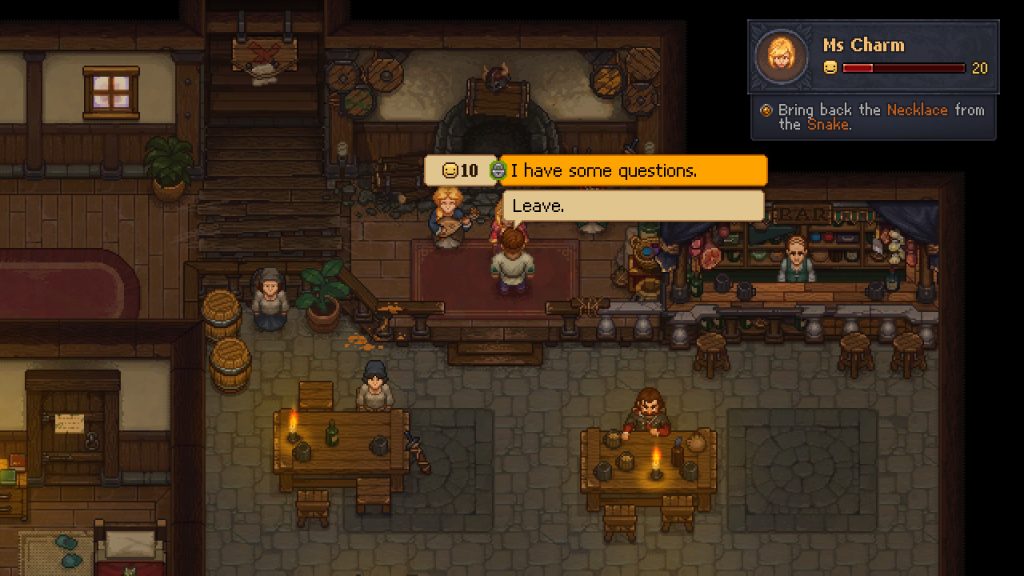 Overall, Graveyard Keeper has many great management sim aspects that fans of the genre should enjoy. I was delighted in the premise and pleasantly surprised by the humor and gameplay elements that made keeping your graveyard a joy to take part in. Where it falters is in the lack of direction with providing meaningful tutorials and having to constantly managing your stamina. Even with the faults, Graveyard Keeper is a game that will keep you busy keeping the dead in their graves.