Explore the world of Pokémon: Let’s Go, Pikachu & Eevee with this new trailer

A new trailer has been uploaded that gives us a look at the world, characters and a look at the game as we return to the Kanto region with many familiar faces.

Here is more information on the game from the official website:

If you’re familiar with previous Pokémon RPGs, you’ll find that catching Pokémon works a bit differently in this game. As you wander through the game’s world, you’ll encounter wild Pokémon wandering around in fields of tall grass. If you see a Pokémon you want to attempt to catch, simply approach it. 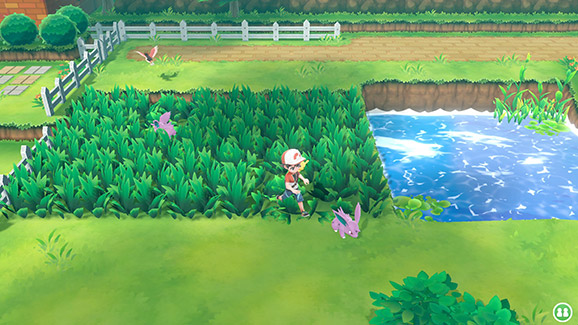 Once you touch the Pokémon, you’ll get a chance to throw Poké Balls at it in a manner very similar to the mobile game Pokémon GO. The wild Pokémon will move around and may try to intimidate you, but don’t get distracted! Just wave your Joy-Con controller with proper timing to throw a Poké Ball. If you’re playing the Nintendo Switch in handheld mode, you’ll move the system around to aim and then throw the Poké Ball by pressing the A Button.

Your chances of catching a Pokémon increase depending on your timing and where your Poké Ball hits the target. Throwing a Poké Ball inside the moving ring will increase the chances of a successful catch, especially if the ring is small. The color of the ring shows how easy it will be to catch the Pokémon—with green meaning easy and red meaning hard. 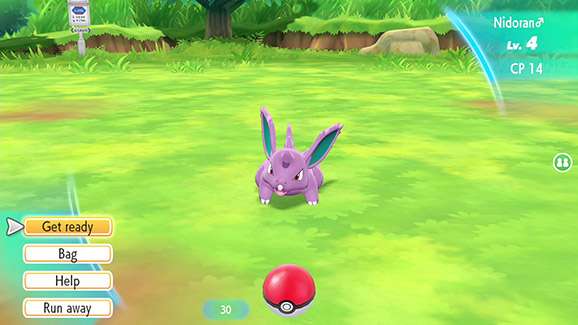 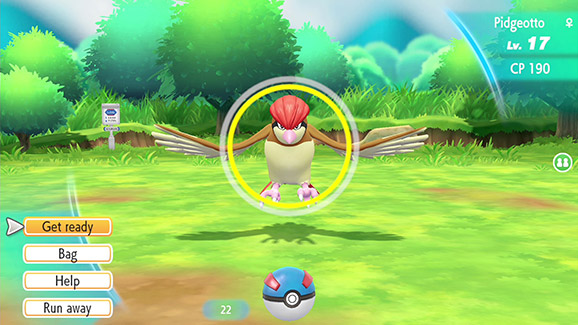 You can make catching Pokémon even easier by switching up the type of Poké Ball you’re using or giving the wild Pokémon a Berry. If you happen to run out of Poké Balls, you can buy more from Poké Marts throughout the region, and you’ll also receive them after defeating other Trainers in battle. As you earn Gym Badges, the lineup of products at Poké Marts will increase and you’ll be able to buy better Poké Balls that have a greater chance of catching wild Pokémon.

It’s not just wild Pokémon that you’ll face off against in Pokémon: Let’s Go, Pikachu! and Pokémon: Let’s Go, Eevee! During your journey, there will be some Pokémon Trainers who will challenge you to a battle. If a Pokémon Trainer sees you in the field, it’s time for battle. The battles here function much like those in previous Pokémon RPGs, so longtime fans will feel right at home. 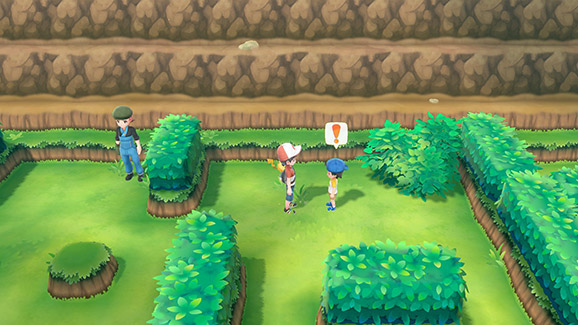 In addition to selecting moves, you can switch out a Pokémon if it’s about to faint—or use an item to support it. If you defeat a Pokémon Trainer, your Pokémon will gain Exp. Points and you’ll receive prize money and sometimes Poké Balls. 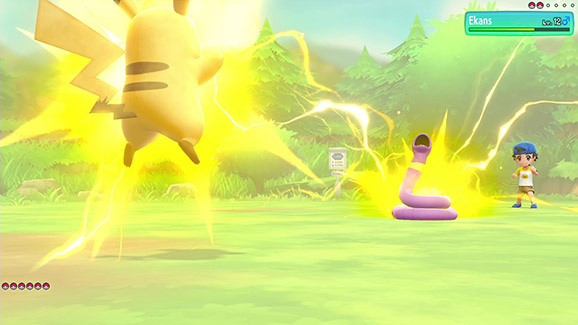 The Pokémon: Let’s Go, Pikachu! and Pokémon: Let’s Go, Eevee! video game is based on Pokémon Yellow: Special Pikachu Edition, which was first released on Nintendo’s portable Game Boy system in Japan in 1998. Like the setting of that classic RPG adventure, this game takes place in the Kanto region. It’s amazing to see how it has visually evolved after 20 years. 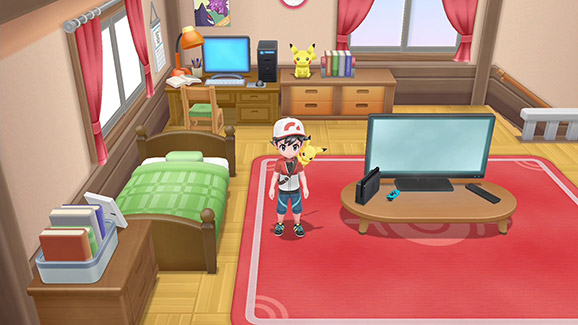 The Kanto region is a varied locale, filled with small towns, cities, mountains, rivers, forests, and seas. There is a wide variety of places to explore and plenty of Pokémon to be found in various habitats. You’ll begin your journey in Pallet Town, a relatively small civic center that’s also home to your friendly rival, who just so happens to be your next-door neighbor. 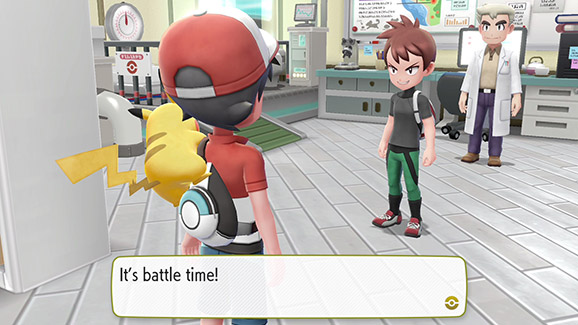 Pallet Town is also home to Professor Oak, whose laboratory is near your home. The kindly professor studies Pokémon for a living, and he gives you a valuable gift before you set out—your Pokédex, a high-tech encyclopedia that automatically records data on any new species of Pokémon that you catch! He hopes to one day see a Pokédex completed. Will you help him fulfill that dream?

After leaving Pallet Town, you’ll eventually make your way to new places, including Pewter City, which sits at the foot of a great stone mountain. This city is the home of the Pewter Museum of Science, which has many Fossils on display. You’ll also meet Brock, the Pewter City Gym Leader who is sometimes referred to as the rock-solid Pokémon Trainer. 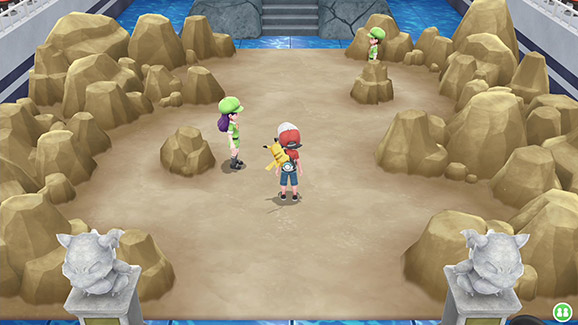 Pokémon Gyms are places for Pokémon Trainers to test their skill in battle. Before entering a Gym, you must meet certain conditions such as having Pokémon of a certain type or level. Once you qualify for entry, you’ll face off in Pokémon battles against a series of challenging opponents, culminating in a battle against the Gym Leader in the hope of earning a coveted Gym Badge. 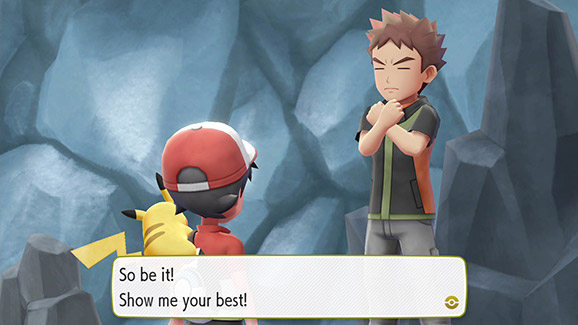 Brock is an expert with Rock-type Pokémon, so you’ll want to be sure to have some Pokémon on your team that will give you a type advantage in battle. 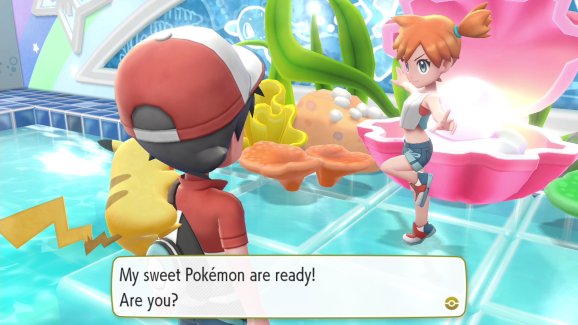 After leaving Pewter City, it won’t be long before you arrive in Cerulean City, a place that’s bordered by waterways. When visiting this city, be on the lookout for a mischievous Squirtle that has been spotted in the area. The Gym Leader Misty waits in the Cerulean City Gym for Trainers to challenge her to battle. Also known as the tomboyish mermaid, it should come as no surprise to learn that Misty is an expert with Water-type Pokémon. Defeat her, and another Gym Badge is yours!

In between exploring and battling, it’s a good idea to relax with your Pokémon buddies. In Pokémon: Let’s Go, Pikachu! and Pokémon: Let’s Go, Eevee!, you can enjoy a little playtime with Pikachu or Eevee to strengthen your bond with them. Your partner Pokémon will sit on your arm, allowing you to pet, feed, and even tickle it. Not only is this little diversion adorable, but good things are likely to happen as the two of you become closer. 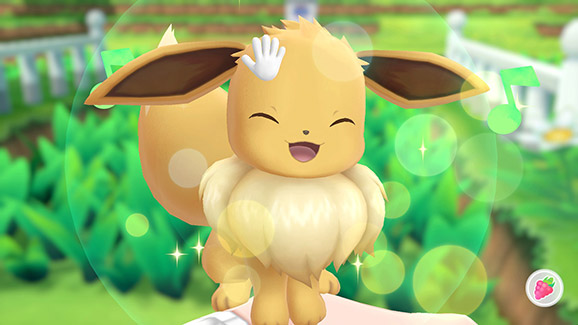 It’s not just your partner Pokémon that you can interact with, though. Any Pokémon in the game can be your traveling companion. When you take a Pokémon out of its Poké Ball, it will walk with you to make your journey even more fun. As you explore the Kanto region with them, your Pokémon might even find hidden items. Plus, different Pokémon can travel in different ways. Some Pokémon will even let you ride them, allowing you to move faster around the Pokémon world. It’s a great way to experience the adventure with your favorite Pokémon!

One of the things that makes the world of Pokémon so engaging is the ability to interact with other Trainers during your adventure. In this sense, Pokémon: Let’s Go, Pikachu! and Pokémon: Let’s Go, Eevee! do not disappoint thanks to their Support Play, which allows two players to explore the world together. (Both players can have a Pokémon travel alongside them as well!)

You can boost your chances of catching a wild Pokémon by throwing Poké Balls at the same time as your Support Trainer during Support Play. You can join in as a Support Trainer by waving the second controller, even after a wild Pokémon has already been encountered! Throwing the Poké Ball at the right time makes it more likely you’ll catch the Pokémon, and it will earn your party more Exp. Points, too. 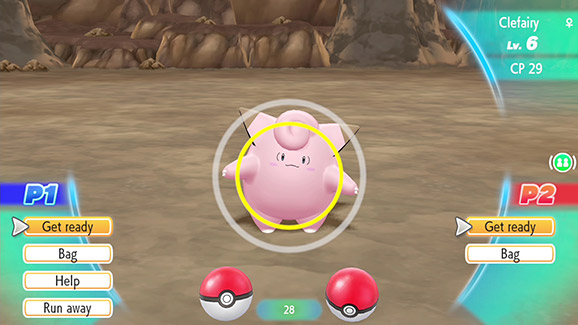 Support Play can even give you an advantage in Pokémon battles against other Trainers. Team up with a friend, and you’ll both be able to control a Pokémon and issue it commands during the match. 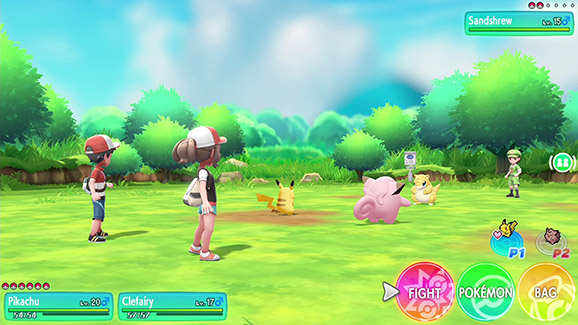 And battling isn’t the only way to play with your friends. You can also trade Pokémon using these communication features to gather Pokémon you’ve never seen before and complete your Pokédex.

Please note that in order to use the internet-based communication features for battling and trading, you will need to enroll in the Nintendo Switch Online service that officially starts in September. 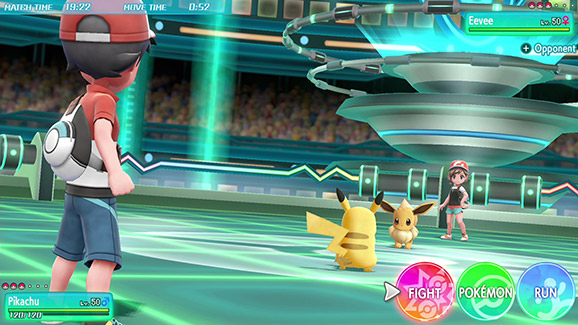 The Pokémon: Let’s Go, Pikachu! and Pokémon: Let’s Go, Eevee! game is shaping up to be an excellent entry in the Pokémon series—not only for longtime Pokémon fans, but for beginners as well. Please look forward to more details about the game as we get closer to the release date.

Which version do you plan on getting?