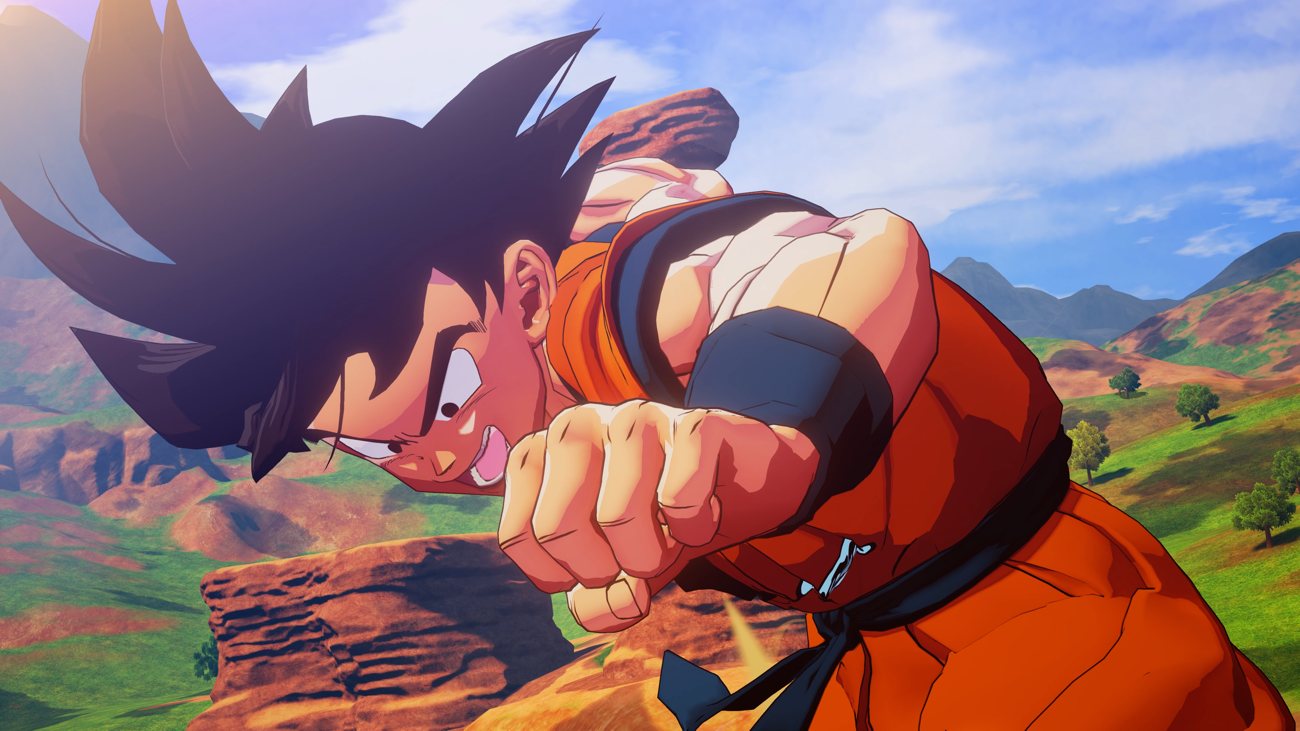 E3 2019 – Dragon Ball Z: Kakarot is everything you loved about the series and more

Dragon Ball is a franchise that’s more popular now than it was over two decades ago after the conclusion of Dragon Ball Z. Since then, we’ve seen new films, a new anime series, and tons of games released but this latest installment from Bandai Namco Entertainment may be the best one yet.

At E3, one game that I had to get some hands on time with is Dragon Ball Z Kakarot (previously known as Dragon Ball Game – Project Z). Developed by CyberConnect 2 who have an amazing job bringing anime to life in video games with games like Naruto Shippuden: Ultimate Ninja Storm 4 (or the entire Ultimate Ninja series for that matter), Asura’s Wrath, the .Hack//GU trilogy. Dragon Ball Z Kakarot may be the ultimate experience for longtime fans of the series have been waiting for blending beautiful visuals with a single player campaign that focuses on giving players full control of the adventures of Goku.

One of my biggest issues with the Dragon Ball Z games was the fact that it told the story over and over only with slight changes over the last two decades, whether it was a fighting game or action RPG but Dragon Ball Z Kakarot is different. In the 20 minute demo, It truly felt like I was not only watching an episode of Dragon Ball Z but in full control of the series, it’s not developed for multiplayer so with that in mind it gives you so much more to do other than mashing your opponents into submission…you can save that for the AI.

20 minutes might sound like a fair amount of time but really I only scratched the surface of the game, the demo is set at the start of Dragon Ball Z as Goku teams up with Piccolo to face off against Raditz who has kidnapped Gohan…when suddenly everything stops for a split second and a very familiar voice introduces the name of the episode. A great start for the game if I do say so myself. From there I was able to do one of two things, head straight to the battle with Raditz or explore the world. Seeing as defeating Raditz would end the demo I made the obvious choice and roamed around. 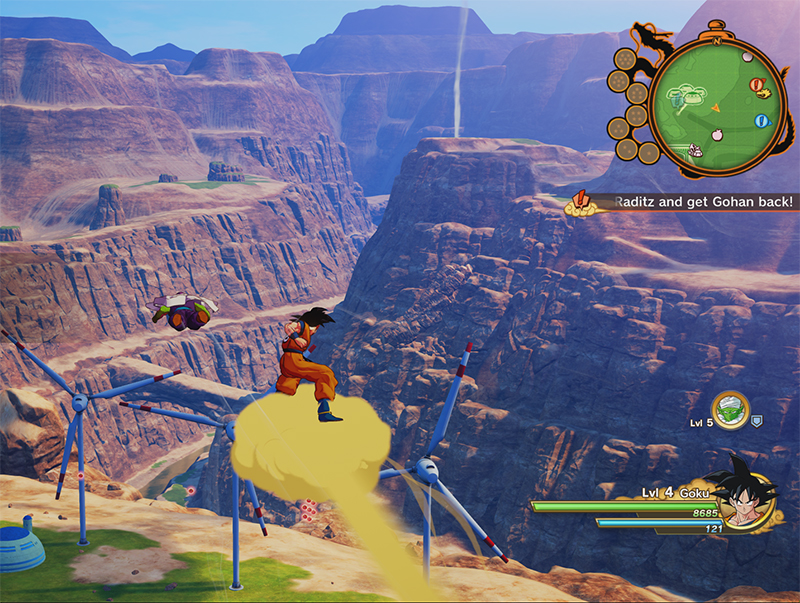 While roaming around I was able to take down a dinosaur, sense ki, hunt for food, collect some Z orbs which let you purchase new moves, take on random quests, and travel to places where you may come across a few characters that may have not made an appearance in the DBZ series but did in the original Dragon Ball series like Nam, Baba, and Eighter. You can even fish in this game, it’s pretty funny as Goku pulls out a tail and connects to his butt and just shakes his ass while he waits for a bite.

The fight against Raditz was a two part battle, the battle system felt very similar to the original Dragon Ball Z Budokai games, you can combo your enemies by mashing your attack button, fire ki blasts, quickly rush down your opponent, get away with high-speed dashes, and of course use special attacks by inputting specific commands.

The first part of the battle was Goku vs Raditz with Piccolo on support, by pressing the R2 button you are able to give commands to Piccolo who can help you out. Other than that it’s pretty standard. You can charge your ki to keep your ki meter full to keep using your special attacks like the Kamehameha. The second part of the battle is a bit different, Piccolo wasn’t part of the battle as he is charging his special beam cannon so it’s a 1 vs 1 battle but what makes it more interesting is Raditz will unleash his Double Sunday attack where he unleashes two powerful beams. He unleashed this move about three times in my fight, the only thing you can do when he uses it is dodge the beam by flying around or using vanish, it was a cool little mini game and adds something different to the fight. 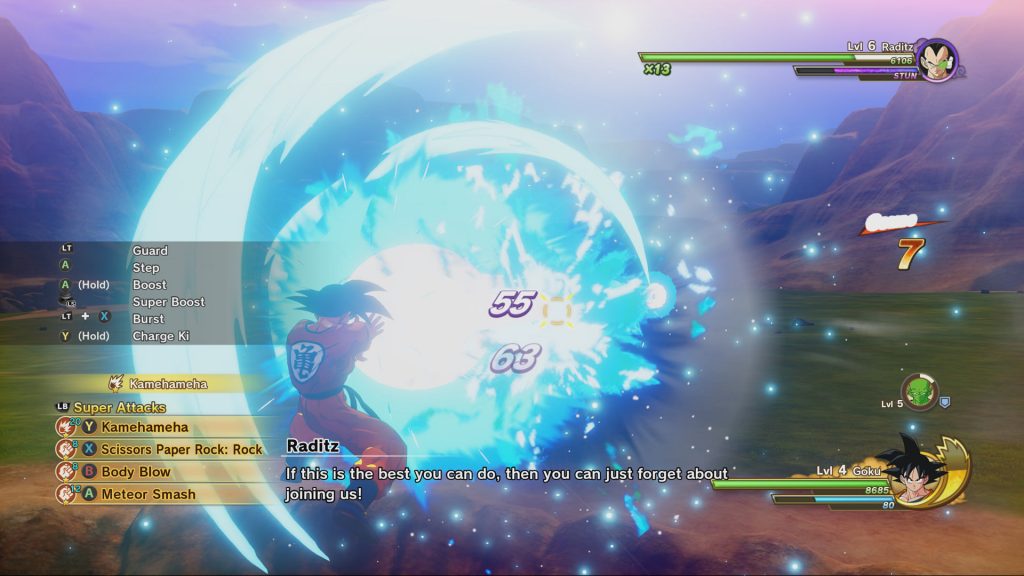 The game features a “Break” gauge which fills up as you deal damage to your opponents, when full, your opponent will be stunned for a short time where you can deal massive damage. Another way you can deal massive damage is with “Surge,” similar to the Break gauge as you take damage or deal damage your tension bar fills up and when both your Ki and tension bar are full you enter a mode where able you cancel your special and super moves to deal some huge damage with some awesome looking combos.

It was revealed that the game isn’t fully open world and that’s fine, you still want to keep the authentic feel of the series and you eventually unlock more areas, I just wonder how far in the story the game will go, it clicks all the right buttons with so much wonderful nostalgia which includes Cha-La Head-Cha-La playing in the background as you face off against Raditz in the second battle. There is still so much more I want to know about the game but for now I am pretty excited with what was shown as it looks like the perfect game for longtime fans who want something a little different.