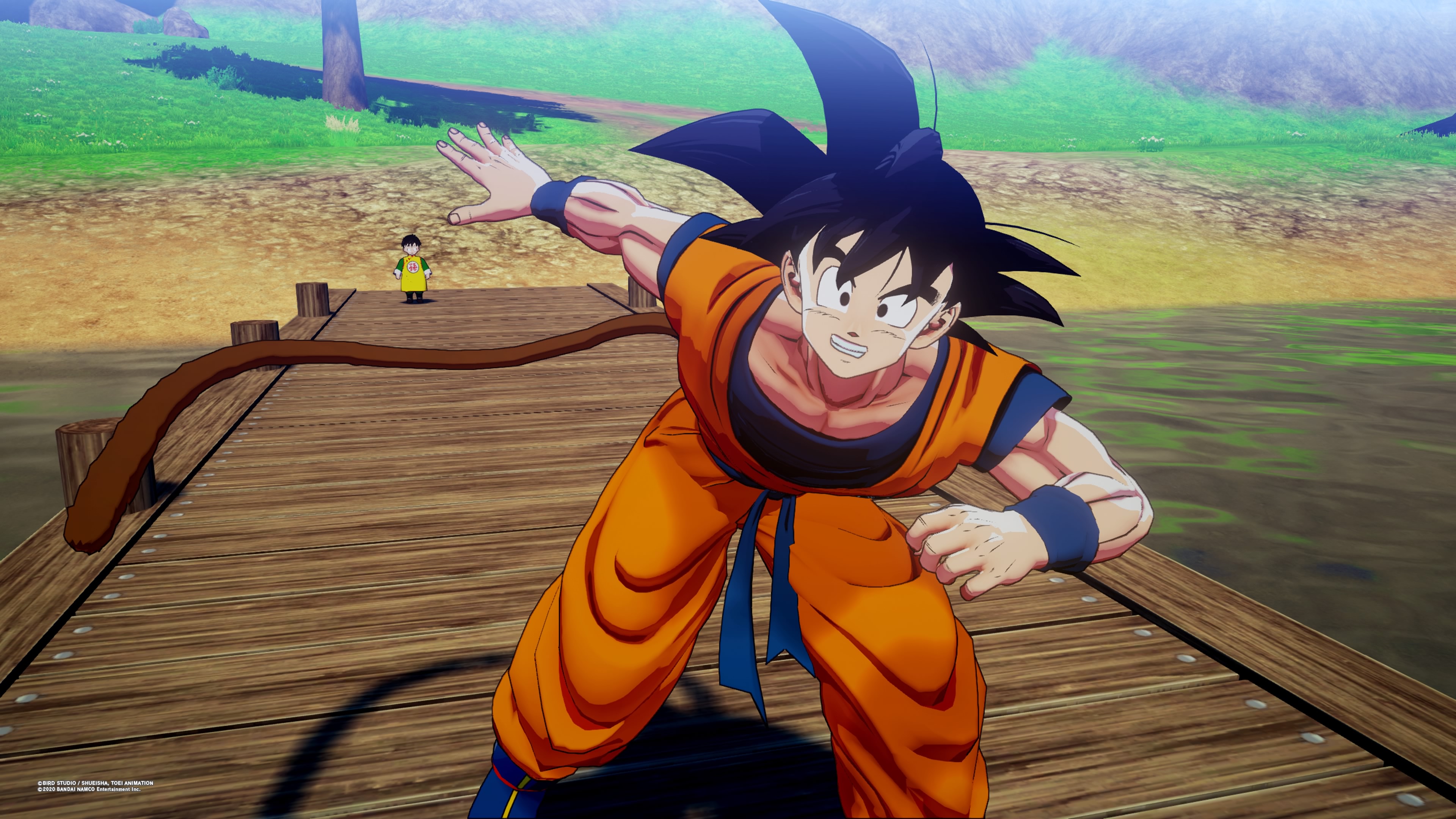 Chris
Featured
January 28, 2020
Dragon Ball Z is easily one of the most iconic anime series of all time, and while we’ve had the chance to relive the adventure of Goku over and over in various video game releases, none have been as impressive as Dragon Ball Z: Kakarot. However, as much as I enjoyed the game, there are some issues that hold back its full potential to reach perfection. 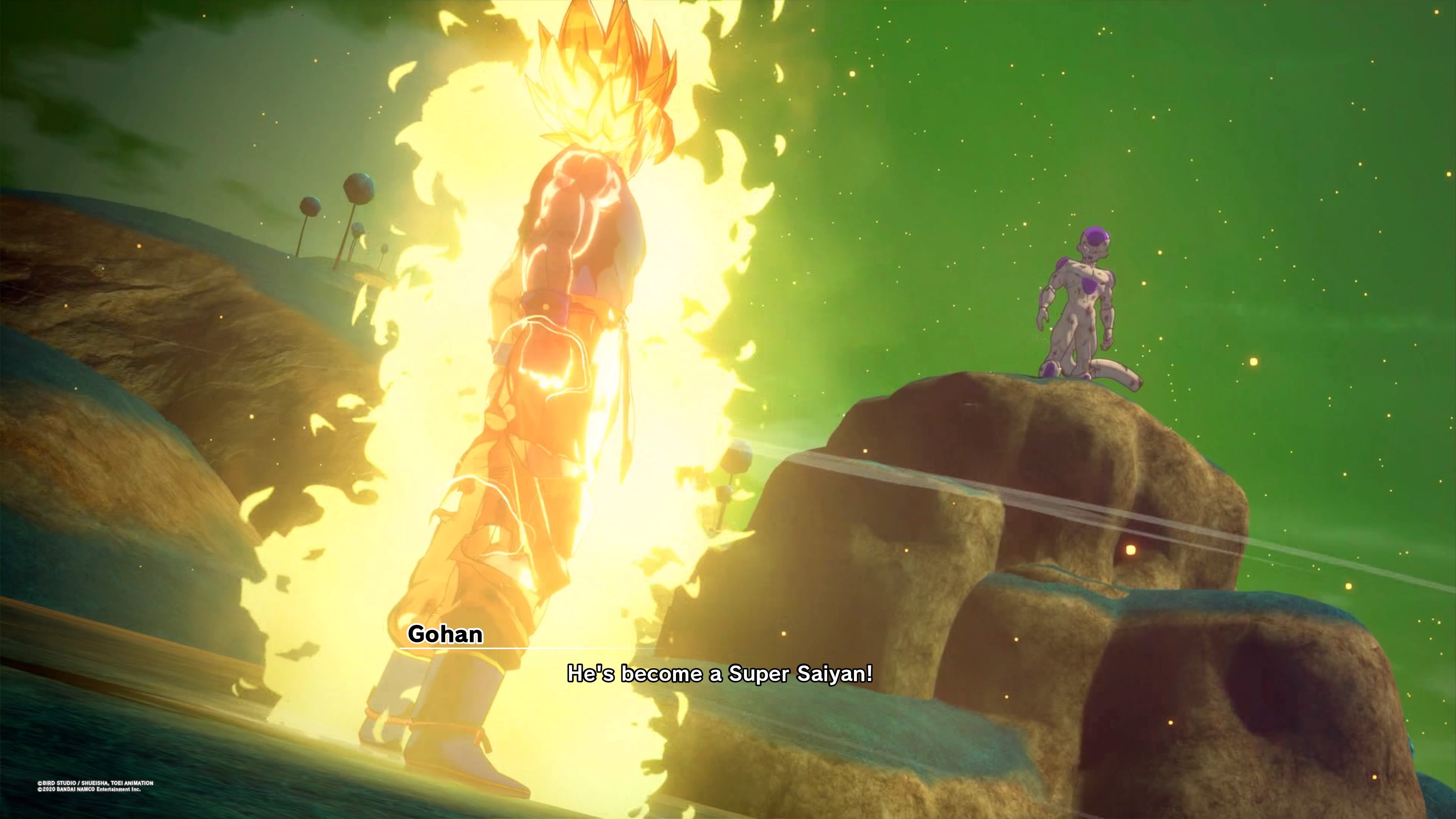 The game does a fantastic job of retelling the entire series across the four arcs, but there are some details that are missed out on. You will find some noticeable changes, such as the removal of a certain scenario from a battle, but ultimately, it doesn’t affect the overall story.  I welcomed some of these additions, which include seeing the return of characters who haven’t been depicted since the original Dragon Ball series, such as Launch. 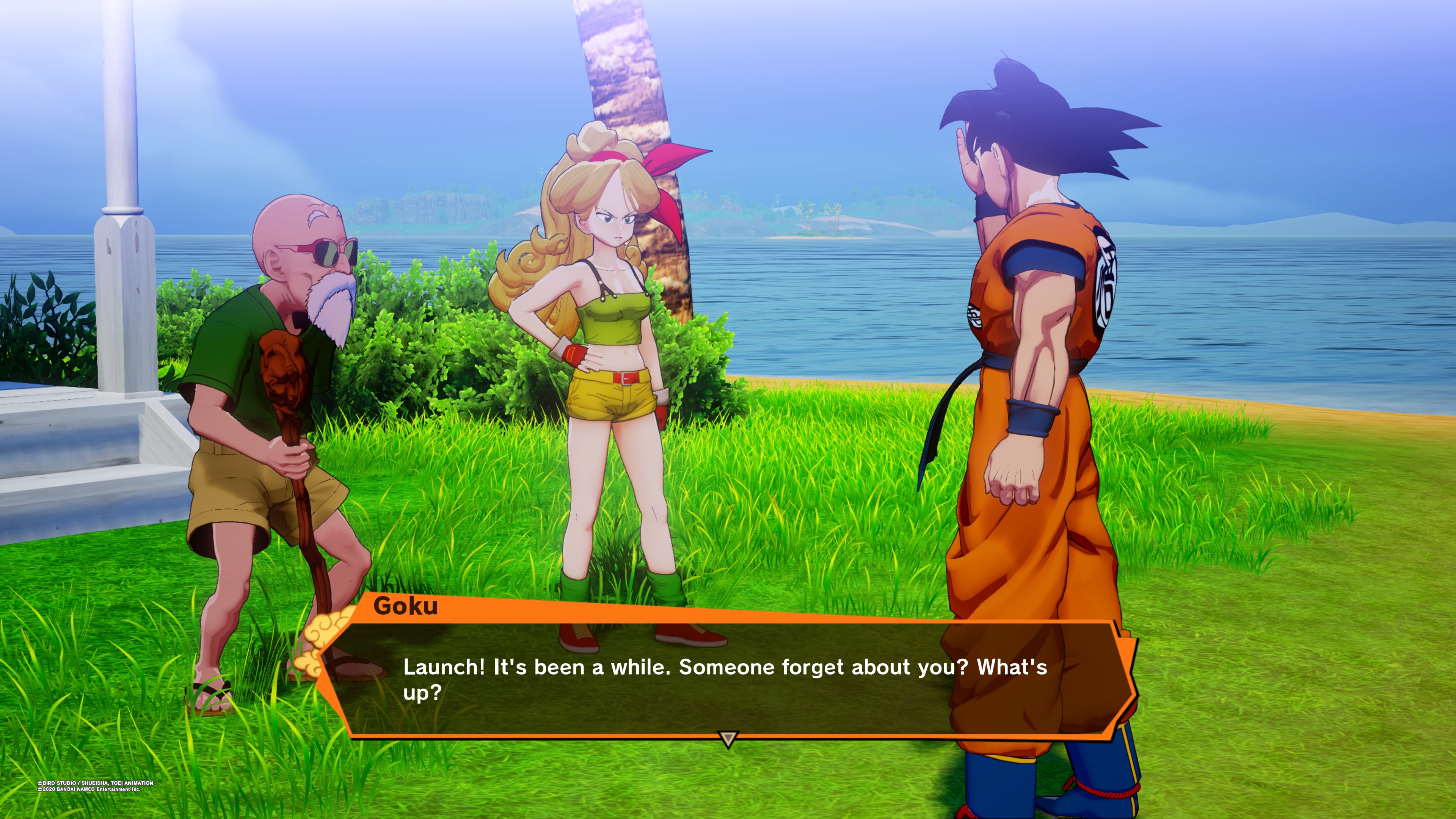 When it was revealed that CyberConnect2 would be working on this title, there was no doubt in my mind that the visuals would be amazing. From start to finish, the company delivers with some spectacular character designs and environments that you could really tell were given so much love and attention to create a stunning world that you can’t help but explore. 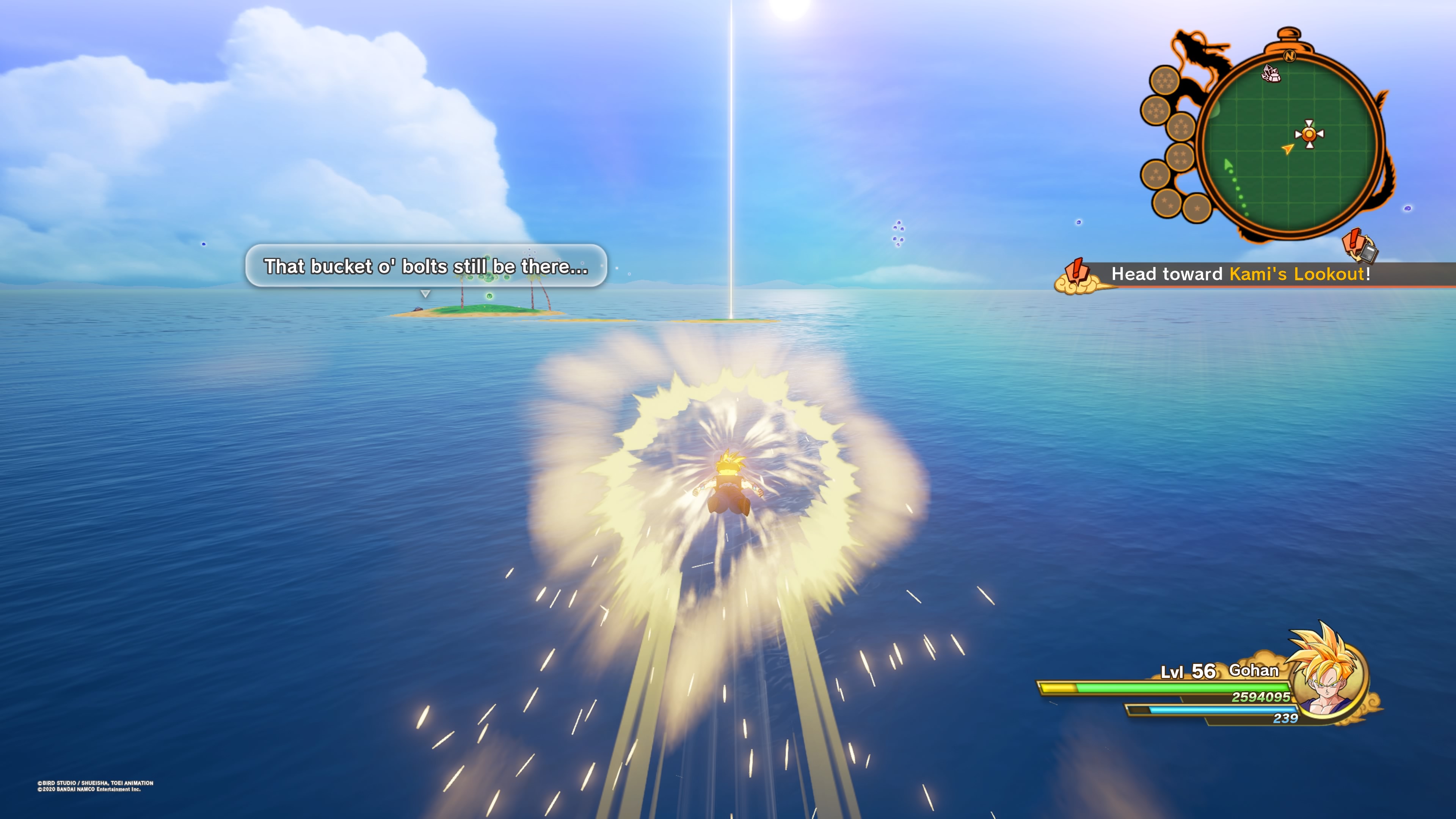 Dragon Ball Z consisted of 291 episodes, but all of that is condensed perfectly to just a little over 30 hours of gameplay in Kakarot, and that’s completing the game while taking on minimal quests. I enjoyed Kakarot’s story aspect, but it can get pretty tedious and repetitive. Players have to repeat the same actions over and over, such as fighting, having to do a quest or two, fighting once again, talking to someone and then fighting again. This wouldn’t be a huge problem, but one of my biggest gripes with the game tends to be the copious amounts of loading times. Normally, I can handle a few loading screens, but every time you jump to a new area, the game has to load. You tend to do this a lot, especially as you try to collect all seven Dragon Balls, which outside of the story quest respawn every 20 minutes. However, where it really starts to get annoying is during certain side quests where you need to fly to one area to talk to someone, only for the game to automatically put you in another location. This requires loading screen only for you to have to go back to the place where you initially started the quest aka yet another loading screen.

All right. That’s enough ranting about loading screens. Let’s get to my favorite aspect of the game, which is exploring the amazing world that CyberConnect2 brings to life. Vast locations that you can explore by soaring through the skies, running on land, heck, you can even jump in a car and drive around, explore and play the game at your own pace as you hunt, gather food and materials, fish, take on side quests or collect orbs. Either way, as you do all of these activities, you get to enjoy a lovingly crafted world that’s designed in so much great detail based directly from the source material. The game world of Kakarot is brimming so full of visual life that it’s hard not to get lost in exploring all the lush scenery.

While Kakarot was billed as an action RPG, the RPG elements feel like they were just sprinkled in. The battle system plays like a polished version of Xenoverse’s combat style with the ability to choose your moveset. I had a love and hate relationship with certain aspects of the system. It was fun and enjoyable, especially when you are able to team up with various Z fighters, where you can order them to use a special attack on a limited basis. One of the most broken moves being Tien/Krillin’s Solar Flare, which you can use at the end of a special attack to stun an enemy and immediately attack right away. Battles are pretty straight forward. While in combat, you can dodge, block, use a special attack or execute combos against your opponents by spamming the attack button. 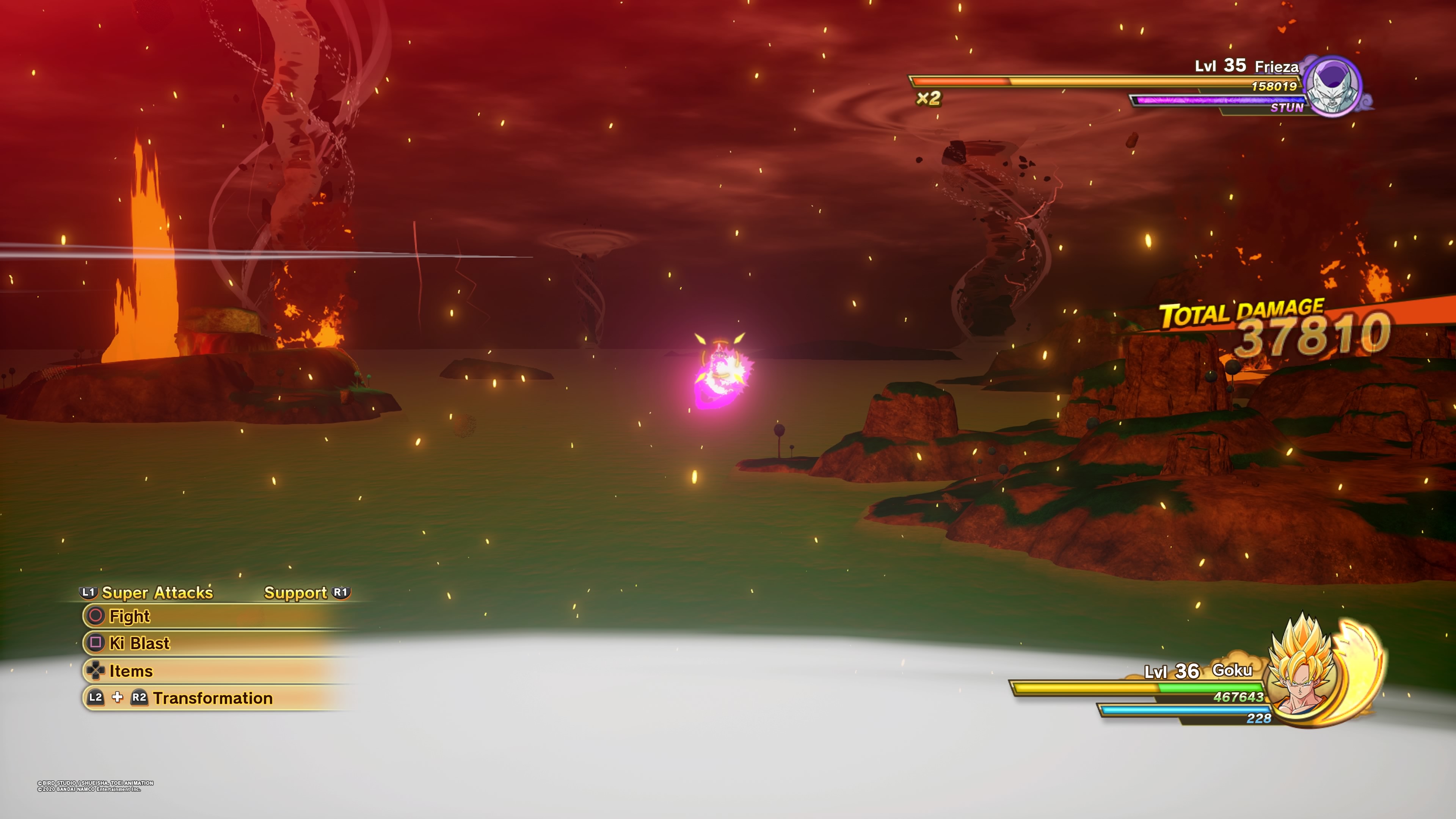 Holding down L1 will open a menu of your special attacks that are available. You don’t have to worry too much about which attack to use as time slows down as you press the L1 button, which offers ample time to decide what special attack works best based on your character. L2 is your guard button and will also allow you to blow back enemies who may be trying to lock you down with constant attacks, or you can counter-attack by teleporting behind your opponent. This way, you can attack them and send them falling to the ground, both of which expend some of your Ki meter.

As the game progresses, you will also unlock various transformations for numerous characters. The transformations are then available to utilize at any time, such as Goku’s Kaioken and Super Saiyan forms. Those forms drain Goku’s Ki, or in Kaioken’s case, the player’s lifebar. Need some heath? Pressing up on the d-pad opens a menu to use health items.

While I enjoyed the battle system, the most tedious aspect was the AI, which tended to be very unbalanced. Some fights are quite easy, and others can be very annoyingly difficult, especially when you are facing off against multiple opponents with a single character. While you focus on one character, another will fire off a special attack, or they will come up from behind you and attack you. Characters like Vegeta with his Big Bang Attack or upgraded Super Big Bang Attack, or Piccolo’s Light Grenade are very overpowered. Those attacks cause significant amounts of damage, and they can be spammed almost instantly to keep enemies from getting anywhere near you. In the final fight with Kid Buu, it was a huge challenge to beat hm with Super Saiyan 3 Goku, but it was a breeze with Super Saiyan 2 Vegeta just by spamming his Big Bang Attack. That ended the fight quickly without taking a single hit.

To be fair, I believe CyberConnect2 did everything they could have in with the battle system. When you have a fast-paced fighting game with multiple characters and tons of ki-based attacks integrated into its design, you can only do so much without taking away from the true experience of  a Dragon Ball game. 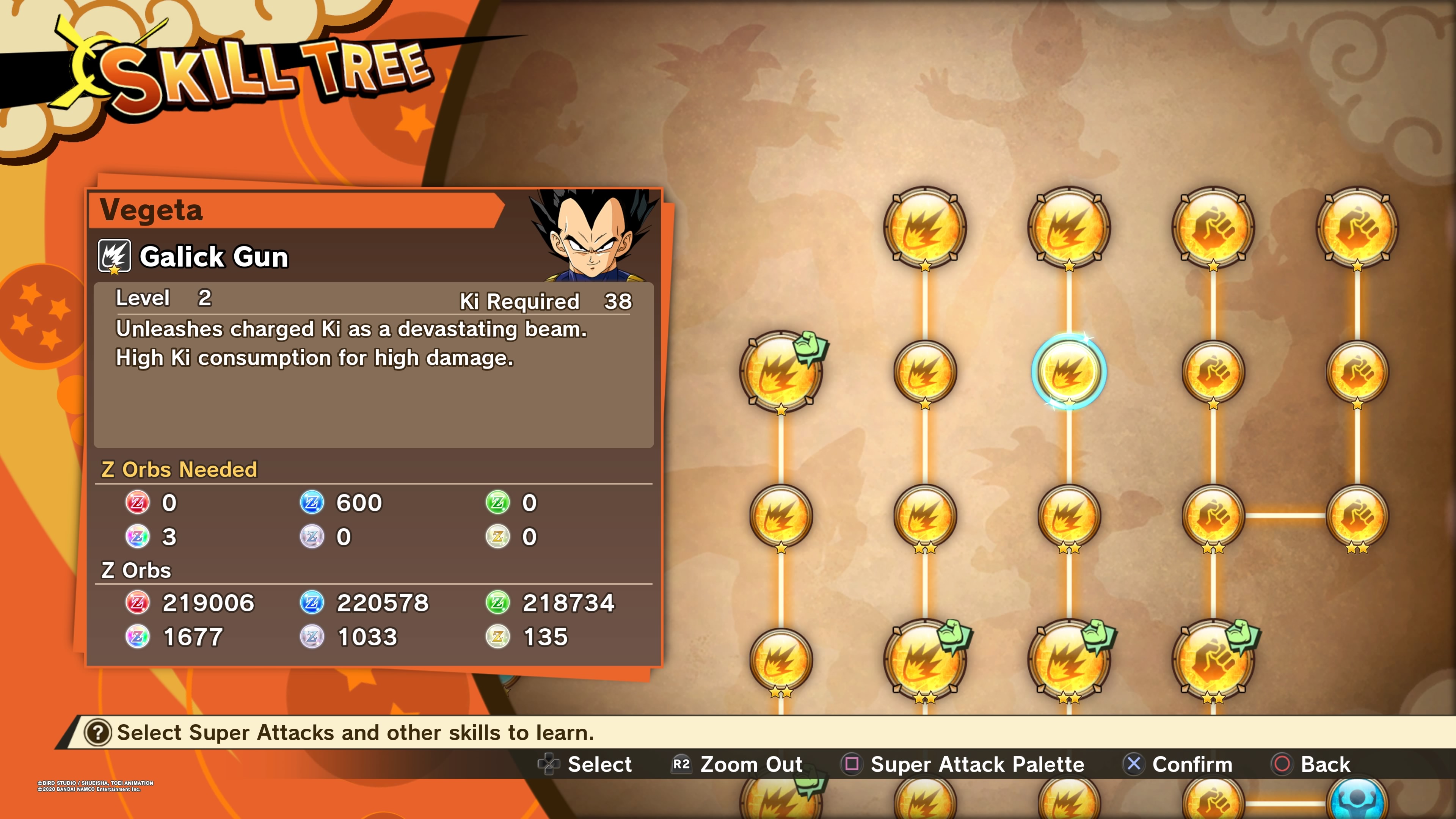 So what RPG elements does Kakarot have exactly? It wasn’t until towards the end of the game that I really played around with a few of these different elements. As you progress through the story of Dragon Ball Z, facing off against enemies like Nappa, Vegeta, Frieza, Cell and so on, you are rewarded with tons of experience points as you rise through the levels. But outside of these fights, you can face off against enemies that are placed around nearly every area of the game world. You don’t really need to fight most of these enemies because the experience they offer for beating them is rather low. In fact, doing side quests rewards you with much higher experience, but I do appreciate the little bonus of when you are that much stronger than your opponent. This allows you to fly at high speeds right into them and automatically win gaining experience. This can be executed a few times. Another element sprinkled in RPG element is the ability to cook meals or courses using items you gather over the course of the game, and the meals offer in-game buffs or bonuses. 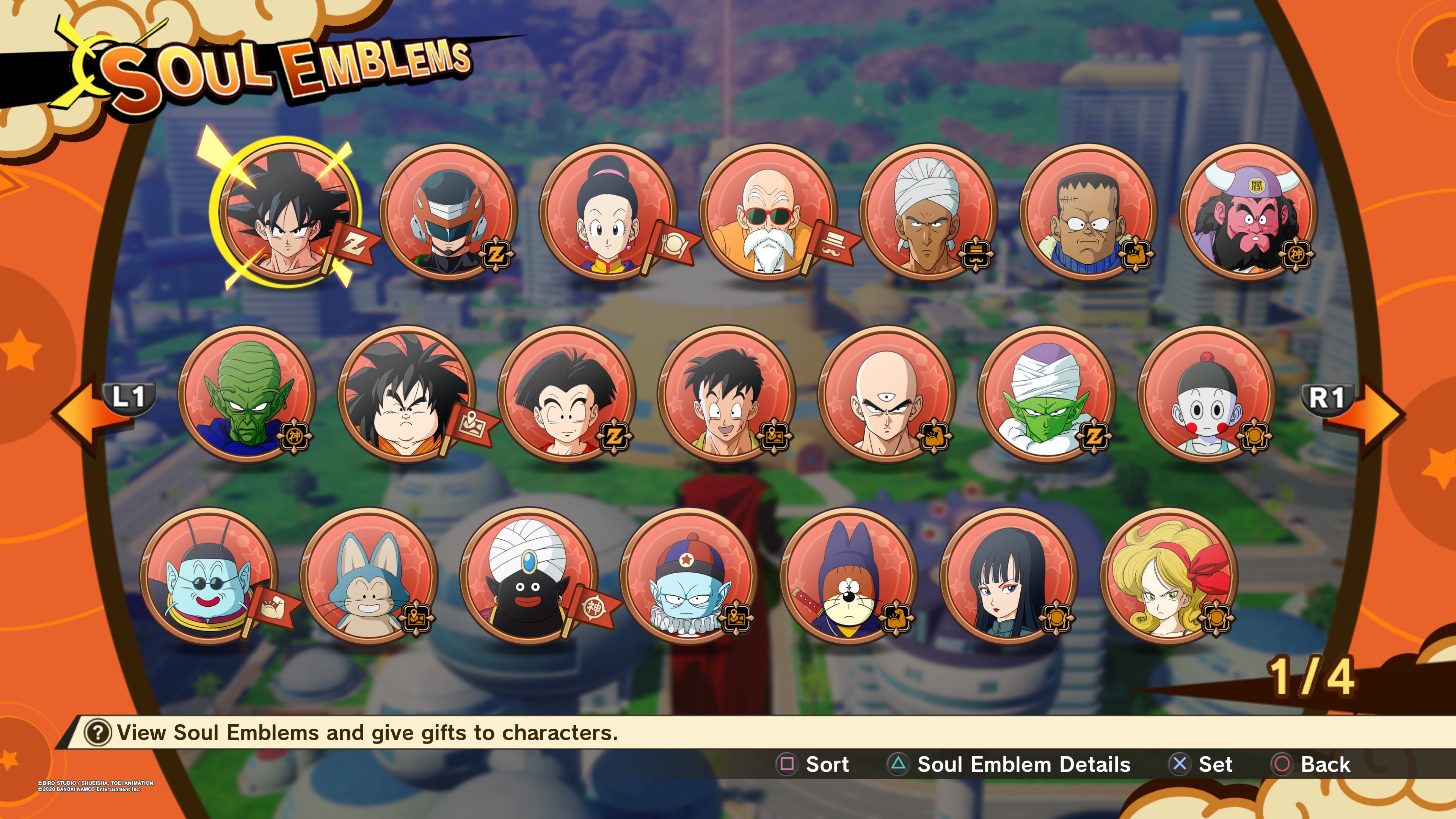 The community system is the one thing that I never really understood as Kakarot doesn’t really dive deep into it whatsoever. As you play through Kakarot or do certain side quests, you acquire Soul Emblems from characters. These are to be placed in what’s called the community, which then offer various bonuses, such as providing bonus EXP for battles, making items cheaper to make and so forth.  What I wasn’t really aware of was the fact that you can improve Soul Emblems by giving them certain items that you acquire during the gameplay experience. I had a single idea of what they could do, and Kakarot never really clues you in.

Dragon Ball Z: Kakarot is a game that aside from a few hiccups is a satisfying experience that can please everyone from newcomers to the series all the way to the hardcore Dragon Ball Z fans, who will love the experience of playing as their favorite characters. The moment you start the experience and are treated to a fantastic intro video, complete with the iconic song Cha-La-Head-Cha-La, it’s on! 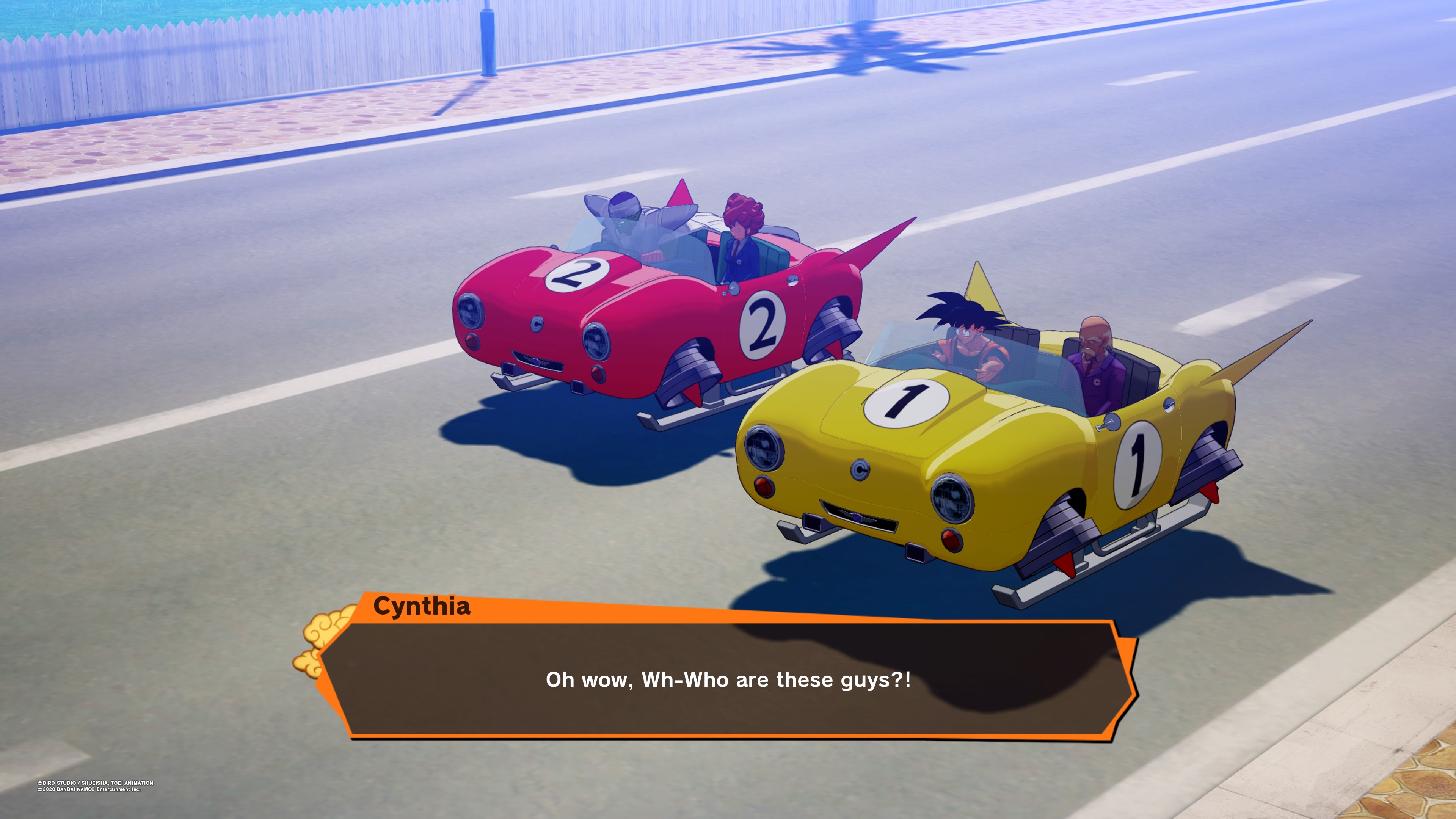 Nuke the Fridge Score: It’s Over 9,000! (Sorry had to make that joke once)
Real Score: 4 out of 5
Type to search or hit ESC to close
See all results