Bioshock is one of the best gaming trilogies of the last generation, and now 2K has brought said trilogy to the Nintendo Switch with Bioshock: The Collection. This package originally released on PS4, Xbox One, and PC in 2016 and featured updated visuals and an enhanced framerate of 60 fps on consoles. Now you might think the Switch ports of these games would look almost identical to the Xbox 360 and PS3 counterparts, but they’re actually the remastered versions with some compromises made, with the most noticeable one being the framerate of 30fps. Thankfully, this framerate is stable in both handheld and docked mode. I’ve only had one instance in Bioshock Infinite where the game shuddered a bit, but I never had anything like that happen again.

Even if the game doesn’t look and run the absolute best on Nintendo Switch, the limitations do not damper the experience at all. You’re getting the same atmosphere, the same story, and the same fun gameplay in this package. Though I do hope the developers add in gyro aiming relatively soon.

However, the biggest fault this game has is it’s price: $50 for this collection, or $20 digitally for each. $50 for three games seems like a good deal, but like other Switch ports, this has the problem of being less on other platforms, going for as little as $20 new physically for PS4 and Xbox One. This makes the Switch version of this collection a much harder sell for people who own other consoles and/or a PC. Another problem is the Switch’s limited storage space, because if you buy this collection digitally, you’ll need to buy a microSD card as it is 31 GB. Buying it physically will reduce the file sizes, but downloads will still be required. That said, the Switch has the benefit of being portable, and if you’re the type of person who almost exclusively plays games on the go or only owns a Switch, this is a Collection definitely worth picking up.

You play as a man named Jack who finds himself in the underwater city of Rapture after a plane crash in 1960. What may seem like a utopia turns out to be something far more sinister, as the city’s been overrun by Splicers, people who’ve had their genetic makeup extremely altered by a compound called ADAM. This allows the enemies and yourself to use plasmids, which give you abilities like electrocution, telekinesis, and flamethrowing. These plasmids are used to help solve puzzles and assist you in combat, where you’ll also be equipped with a variety of firearms to use against Splicers and Big Daddies. Big Daddies are monstrous creatures that protect Little Sisters, who are infused with ADAM. If you want to get their ADAM to upgrade your plasmids, you can do so by healing them or killing them, which will give you more ADAM. 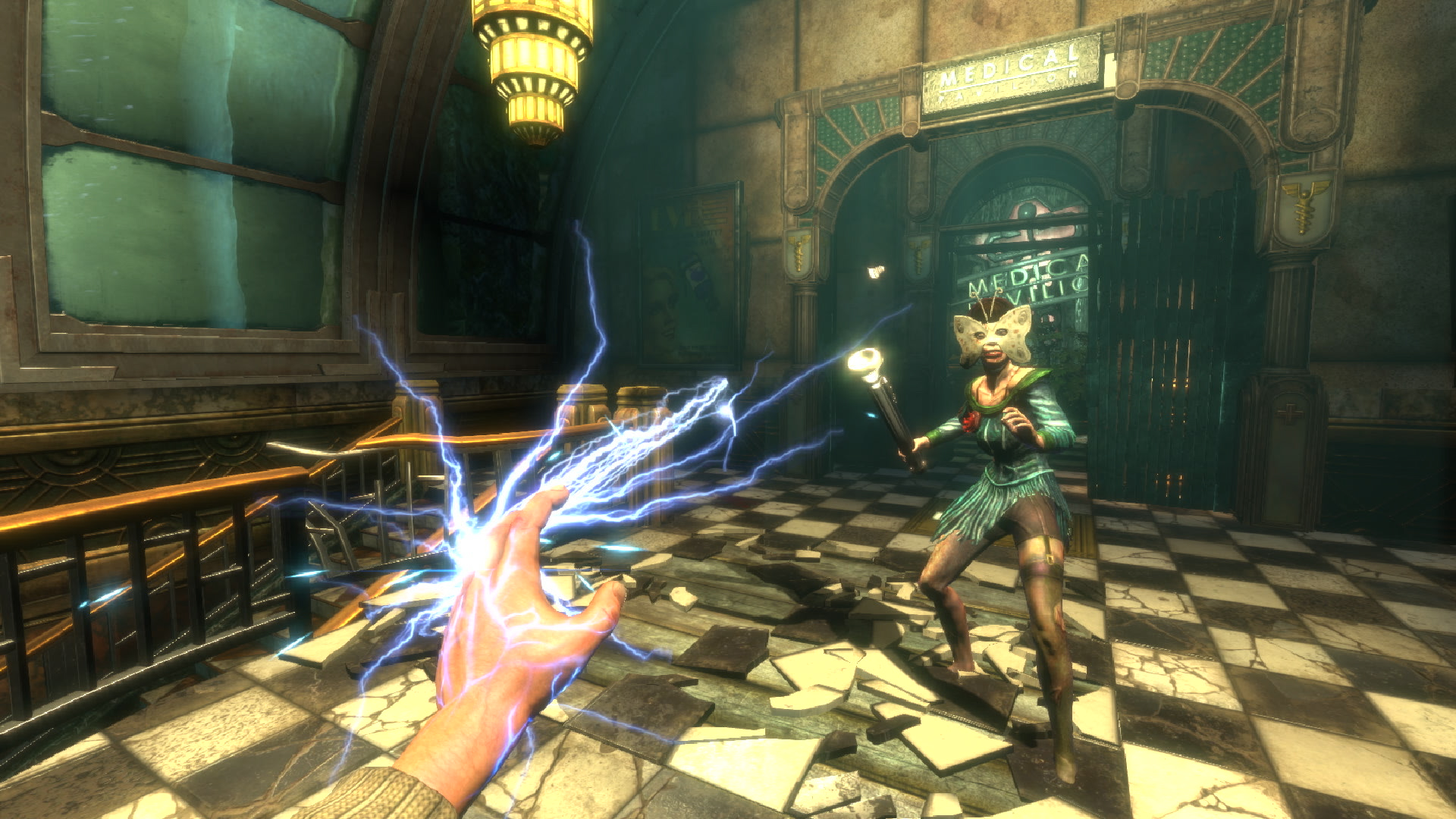 What you decide to do to the Little Sisters will affect how the game ends. I won’t go into any spoiler territory here, but the story in Bioshock is wild. I already knew everything about the story when I first played the game, so it unfortunately didn’t have that much of an effect on me. If you’re going to play this game for the first time, I urge you to stay away from spoilers, which shouldn’t be too hard since the game is 13 years old.

In my opinion, is the weakest entry in the trilogy. It’s still a really good game, but it lacks the impactful story of the first and it has some rather annoying features. In this one you play as a Big Daddy named Delta, who was killed in 1958 before the events of the first game. He then wakes up ten years later and goes on a quest to rescue his now grown up Little Sister Elanor. For all the faults this game has, it makes one giant improvement: you can now use guns and plasmids at the same time. I’m honestly surprised they didn’t go back and put this in the first game, because it just makes life so much easier. And while you still can harvest or rescue Little Sisters for ADAM, this gives you the option to adopt one and gain more ADAM in the process. It makes the ordeal longer, but more rewarding. 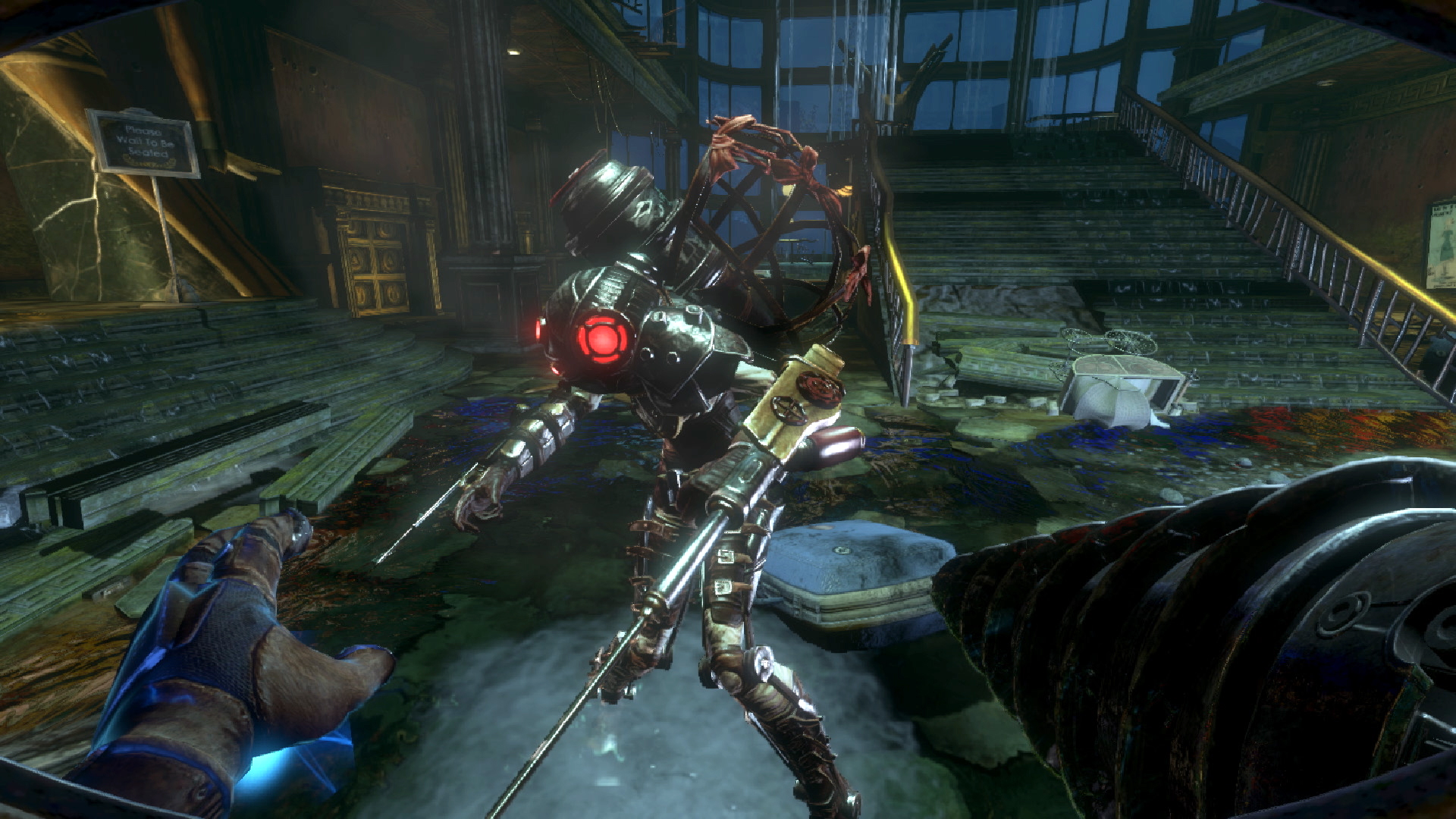 Other than that, it’s a lot more of the first Bioshock, which is never a bad thing. Though the story in this sequel fails to be as impactful, it’s still worth a playthrough as it expands upon Rapture’s backstory and improves upon the gameplay elements of the first. However, my biggest problem with the game are enemies known as Big Sisters. They put up quite a challenge, but when you’re low on money and ammo, they come off as more annoying than difficult.

I’m pretty sure everything I was supposed to feel about the first Bioshock was what I felt playing Infinite for the first time.

Rather than being set in Rapture, Infinite takes us to the skies within the floating city of Columbia in 1912. Playing as a private investigator named Booker Dewitt, you’re tasked with finding a girl named Elizabeth and taking her out of the city, which of course is not a simple task. Infinite feels more like an action shooter game in comparison to the last two which were a bit slower in pacing, but the soul of Bioshock is still intact, with the game rewarding you for exploring off the beaten path.  Between all the action and set pieces, Bioshock Infinite lets you truly get lost in this bright, beautiful, and yet sinister world, all the while introducing you to characters you just can’t help but get invested in. Now the story itself might be more controversial since it goes way way off the rails, but I love how they committed to that insanity. That and the game is just really fun to play. The Plasmids you get (now called Vigors) are more powerful in this game, and there is more weapon variety than ever before, even if you can only equip two guns at a time. What’s REALLY satisfying is when you jump on the Sky-Lines and deliver some death from above. I could go on all day about how great Bioshock Infinite is, but for now I’ll just say that it is a must-play for any fans of action-adventures and shooters. Plus with this pack, you get all the DLC including Burial at Sea Episodes 1 and 2 which are set in Rapture. I love how these expanded the story, but I kind of don’t love how Episode 2 is purely a stealth game. Either way, you should play these when you’re done with Infinite. 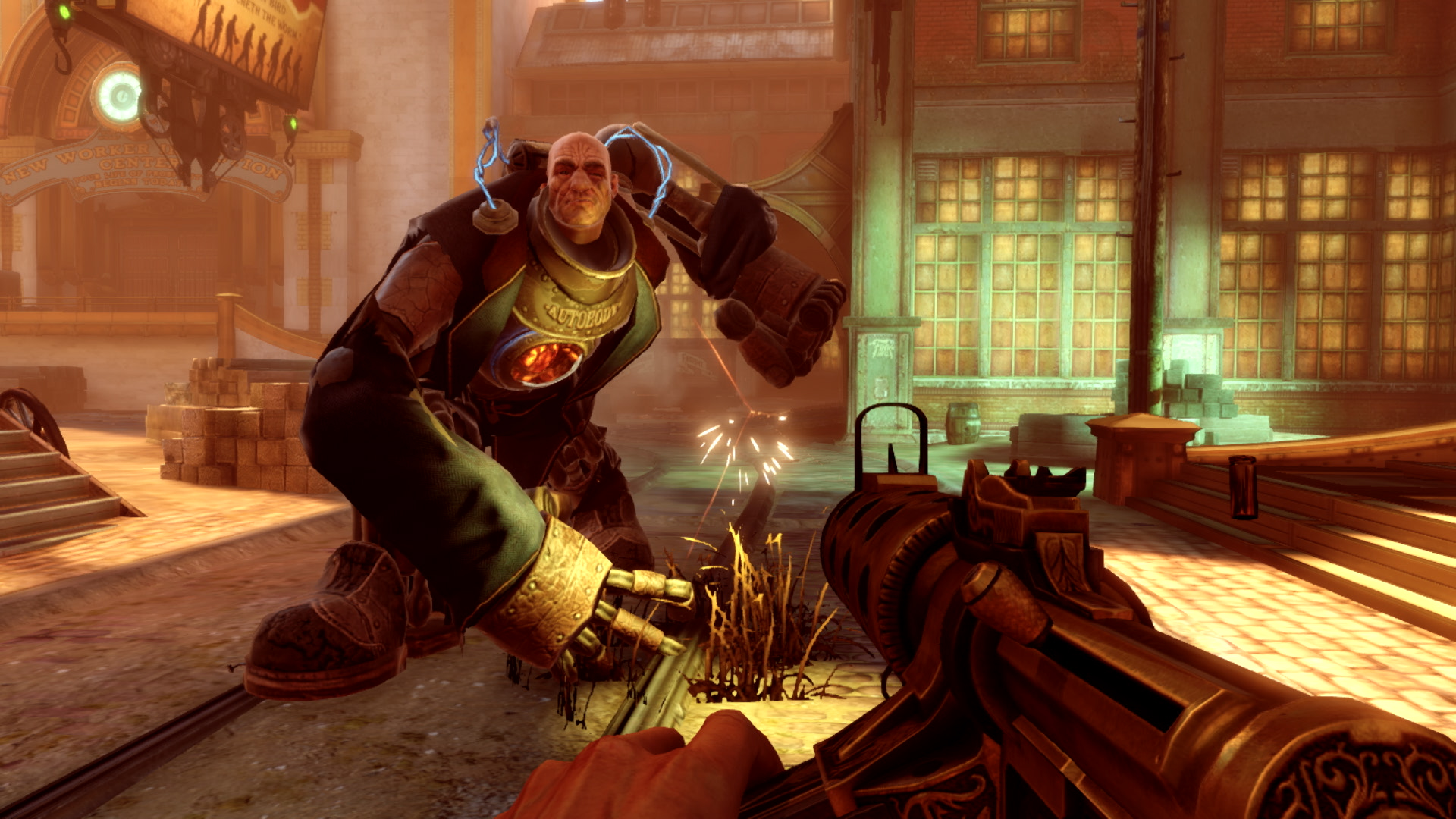 So is The Bioshock Collection on Nintendo Switch worth it? Well if you’re itching to play these games on the go or if you only own a Switch, I would say yes. Though if you do have a PS4, Xbox One, or a pretty good PC, you might want to consider taking a look at the Collection on those platforms before deciding if you want to get them on Switch. After playing these games for this review, it has made me fall in love with Bioshock all over again, I really forgot how great these games are. No matter what platform you play Bioshock: The Collection on, I promise you you’re going to be amazed.