Upon completing the hit 2016 indie shooter SUPERHOT I felt such an empty feeling in my stomach feeling as though I needed more of what it had to offer. The story of SUPERHOT while being cryptic is incredibly fun to engage in while digging deeper to figure out why you’re tasked with taking down polygonal faceless figures mindlessly.

Although the gameplay doesn’t really extend outside of the story the developers of SUPERHOT decided to make a sequel that plays like an arcade styled roguelike.

This is SUPERHOT: Mind Control Delete.

SUPERHOT: Mind Control Delete was reviewed on Xbox One

SUPERHOT: Mind Control Delete is 4 years in the making and offers fans the chance to play SUPERHOT endlessly with new add ons and power-ups that keep the game refreshing and fun for an ungodly amount of time.

SUPER Lack There Of

Right off the bat there is very little story in Mind Control Delete. The game literally opens up with an ominous message acknowledging fans pleas for more levels despite knowing the events of the previous game but SUPERHOT is happy to oblige. Fans looking for a continuation of the events of the original game will be sorely disappointed as the story is replaced with scripted segments that offer a glimpse at linearity while teasing at events that don’t really pay off.

There are bits and pieces here and there when you complete each hub area but all you will find is more jests and constant teasing.

SUPERHOT: Mind Control Delete is a buffet of new ideas that keep the colonels original recipe crispy and dense but never too much that you don’t want to pick it up after a while. The game has successfully jumped genres almost seamlessly. When you jump in the game you will find that there is now a hub world in the form of nodes which are levels packed with rounds of mindless violence that fans have been missing. There is now a heart and hack system that allow players to choose between two upgrades every few rounds within a level. 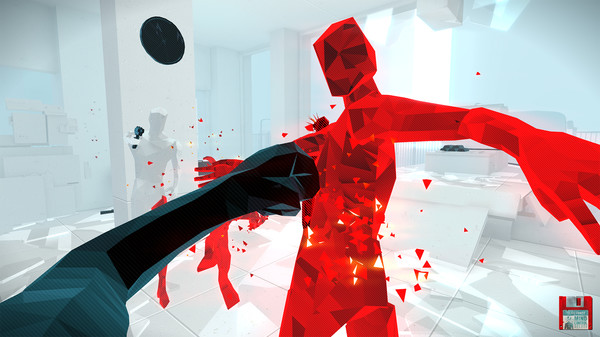 Each hack can seriously change how fast you can slice and dice through enemies with more being unlocked the further you progress. You can acquire the ability to spawn every round throughout that level with a katana, gain an extra heart, pierce through enemies with bullets, and so much more but there comes a cost. Some of these upgrades and mods don’t fit for some of the situations you’re thrown into which therein adds an extra challenge.

Do you want the quicker reload speed rather than the heart refill?

The game really feels like you’re gambling with your life every time you make a decision, on one hand the health can be great but on the other I can spawn a random gun every round. The game is now a roguelike first and a first person shooter second and it totally works.

Enemy variety is also more present in Mind Control Delete with some enemies sporting a much smaller hitbox for that specific killshot. Some have their killspot on their head, leg, torso, or arms making it more of a challenge to just run and gun through an area without an ounce of thought while some enemies spawn with weapons that are completely attached to them in which they fade away upon death. 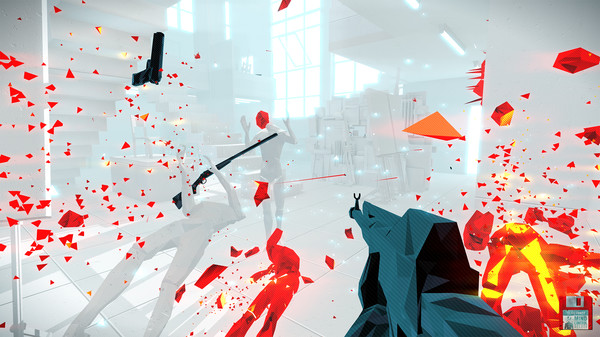 Accompanied with all of these new hacks and mechanics that emphasize on precision these enemy varieties make for an incredibly fun and challenging task making each level feel like its own little puzzle unless you have 100% accuracy at throwing a dagger across the room to hit a moving enemies head.

The node module aesthetic of the map absolutely rocks within the realm that SUPERHOT lies in. The dark ominous sounds and sights of an old MSdos desktop are still there and more incredibly improved which I didn’t think was possible. The developers have improved the game aesthetically to meet the demand for a darker rabbit hole of violence.

The new glitch art transitions in every menu and screen are everything I wanted out of this series and more with the sound effects hitting the right mark making each level quiet and empty while the menus become the real location for anxiety inducing ambiance that you’d find in a haunted office. 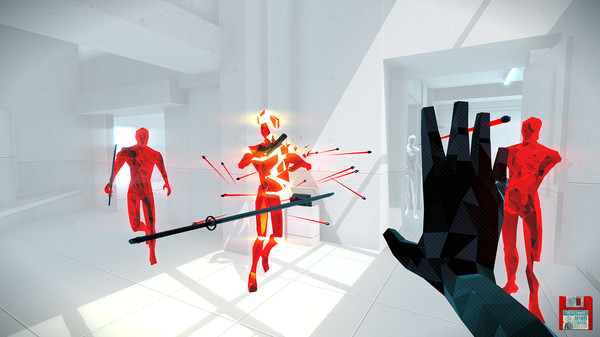 I cannot sit here and explain how cohesive this package is it makes me wish the original story and Mind Control Delete were released as one solid game complimenting each other rather than being individual titles.

A new addition added to this game as well is the clever round ending animation in which you are presented with a full motioned repeat of your progress throughout the level upon completion. No matter how slow you play throughout levels the game will always have a full speed version ready to show you upon vanguishing foes and it’s very neat to see where you started and ended up in such a quick(or slow) fashion.

OVER VIEW OVER VIEW

SUPERHOT: Mind Control Delete is the yin to SUPERHOTS yang. Where the original had the ingenious story and unique level designs Mind Control Delete improves upon it in every way possible while transitioning to a roguelike losing some of that level uniquity in the process. The game offers a fun risk it all system in which losing is noones fault other than your own while allowing for just enough gadgets and hacks to make each round doable.

In the end you are left with one of the most addictive first person shooters in recent memory that will not only challenge your reflexes but your mind as well.