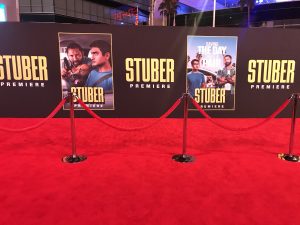 Nuke The Fridge was invited to the red carpet premiere for the comedy action film, Stuber being released today! Stuber takes us on a comedic “Ride” (Pun intended) when hardened LAPD detective Vic Manning (Dave Bautista) is forced to use an Uber and convince its driver Stu, (Kumail Nanjiani) to navigate Los Angeles with him to hunt down a violent criminal. This modern-day comedy features some great action scenes along with some awesome practical effects which are a tip of the hat to the great 80’s style action comedies. The film stars Dave Bautista, Kumail Nanjiani, Mira Sorvino and Natalie Morales. Check out the interviews below with the cast and crew of Stuber!