Slay the Spire is at its core a card game featuring a heavy dose of number generation and parma-death. It started out in Early Access on Steam and made it’s way as a full-fledged release garnering high praise for its astute card-based gameplay and satisfying strategy elements. Now, Slay the Spire has made its way to the Nintendo Switch and it could not have found a better home on this portable console. Varying from highly addicting to punishing, Slay the Spire is a delightfully crafted deck building and rogue like hybrid. 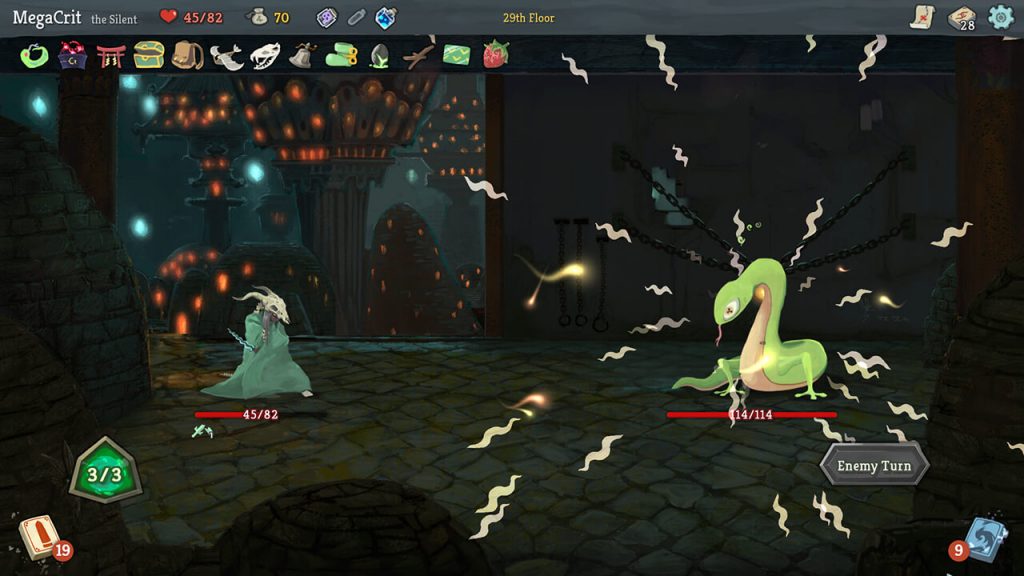 When beginning you adventure, you choose from three different classes: the Iron Clad, the Silent, or the Defect, which basically translates to a fighter, rogue, and mage. The story is not deep, with your main goal being to kill everything that is in your path as you aspire to reach the end. Besides the literal name of the game, it is all about making choices and living with the oftentimes punishing consequences. You’ll be asking yourself: which of these card should I add, which path should I choose, or possibly should I open this chest even though a curse I received earlier might make this detrimental? It’s these choices that make Slay the Spire much more than the sum of its parts.

You’ll spend your time in one of two different screens: the combat section which plays out similar to a player versus environment and the map screen, in which you can generally see the type of encounters you’ll have coming up. After each successful fight, you’re normally given a choice to add one of three different cards to your deck. Ultimately it is up to you for navigating your way across the spire and soar to victory with the deck of your own creation.

A successful run usually lasted about one hour, but managing to reach the end of the peak will take much more time as you learn which combinations work better, learning which encounters to try and avoid, and constantly managing your health pool. Although, certainly low on narrative design, Slay the Spire does show glimpses of world building with a prevalent gloomy and somewhat goofy aesthetic design. This is backed up by a solid soundtrack that fits the mood and tempo of the game well. 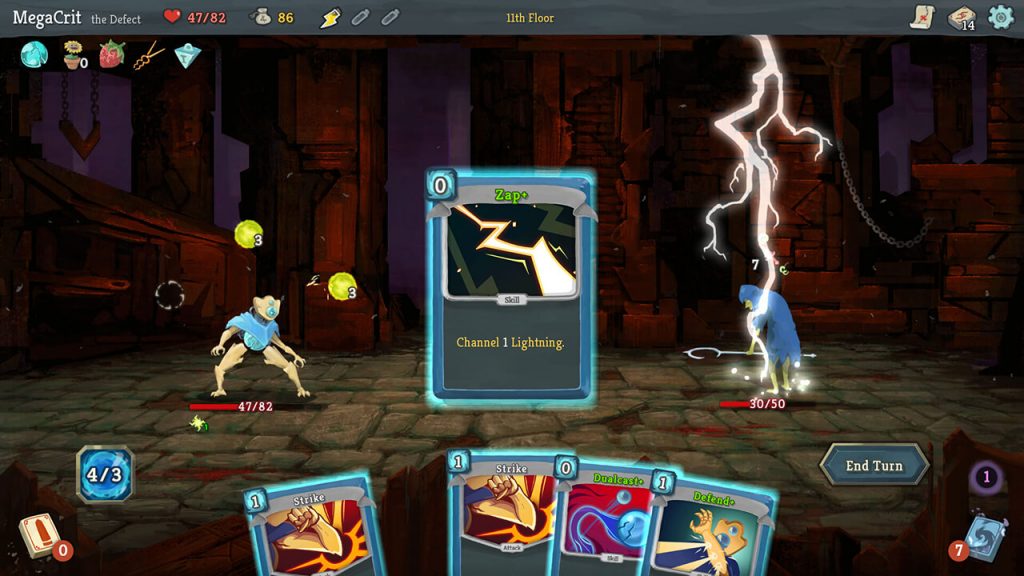 At a basic level, combat is easy to understand. You get a certain amount of energy or mana at every turn and when leveling up you can spend the points you accrued on additional cards granting you defenses, attacks, or magic spells. As enemies telegraph their intentions, the combat is elevated to a system in which you’re constantly trying to find the most optimal solution to the puzzle. Over time you’ll familiarize yourself with the moves of well varied enemies and you can end up with some genuinely intriguing combat sequences as the synergy in your deck builds up. Nothing is more satisfying than finally returning to a boss that gave you trouble, only to show it your freshly unpacked card collection.

Combat can become somewhat repetitive with the limited gameplay motions your character and the enemy exhibit, but suffice to say this is not the case for the majority of your playthroughs. This is in large part due to the massive variance found throughout the cards and events. Each of the three classes has a completely unique set of cards and card rewards to choose from after each combat section, promoting exploration and creativity. You can further upgrade and optimize your deck further with cards from your class from a neutral pool to make stronger cards. 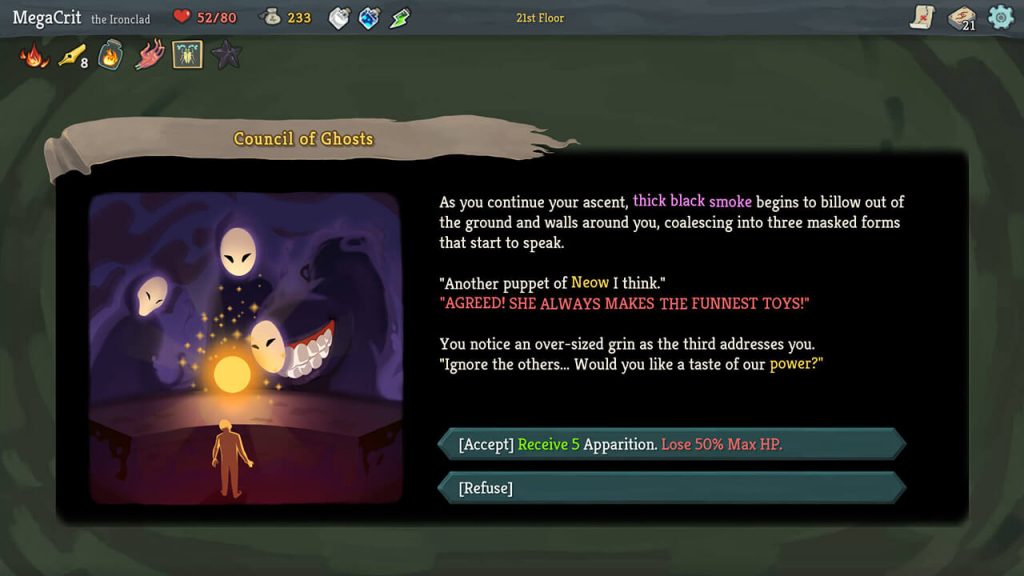 Additionally, Slay the Spire features plenty of events and many flip the script, maybe with taking away your tools and replacing them with other intriguing options. Regarding the well crafted nature of Slay the Spire, virtually every decision may not go as it may seem. Risk/reward is engrained into the core of Slay the Spire perfectly and just because a reward may be rare doesn’t mean it can’t be a complete waste or actively counterproductive to your particular run.

Card balance does start to waver as you challenge yourself further with the significantly higher difficulties available, in which you’re likely to fall back on familiar strategies, However, ultimately by the time you’ve worked your way to that point you’ve already mastered the ridiculous amount of options and possibilities Slay the Spire does offer. I have spent a lot of time with card based games and gameplay systems, and Slay the Spire definitely fulfilled my card building dreams of not only being accessible, but also engaging and highly customizable. Sometimes you’re given opportunities to remove cards as well when they are disguised more negatively as the seem to be. 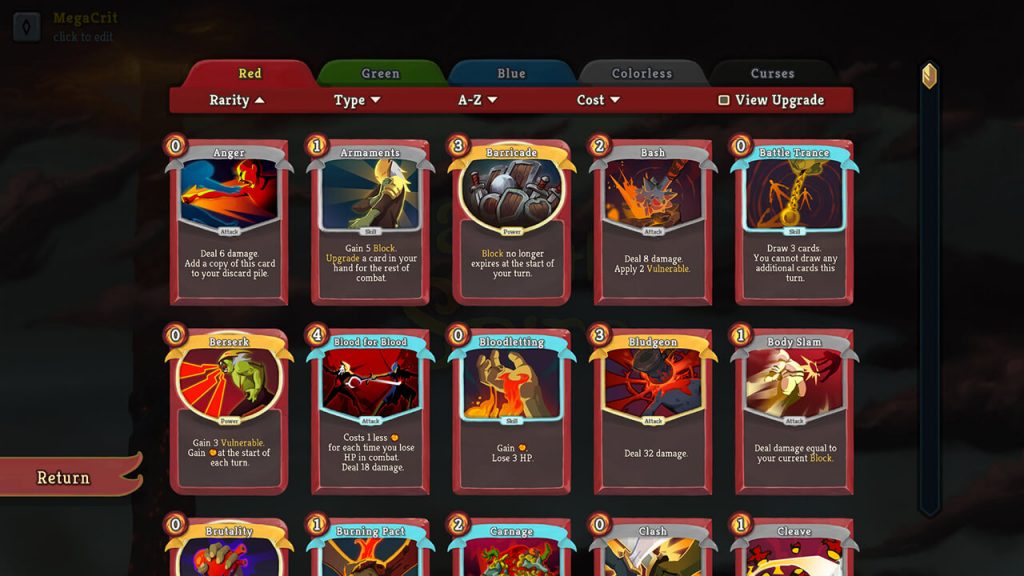 This goes to say that Splay the Spire is challenging and it is easy to fall back in the feeling that random number generation is what killed you. Certainly there is a lot of variance, but I often found that you could trace a loss back to cognitive choices you’ve made along the way, whether it’s trying to live on a knife’s edge refusing to heal in order to get more upgrades for your cards or taking a more riskier path filled with may more boss fights. Speaking of bosses, they are highly varied and reminded me of the complexity of Darkest Dungeon in how they were highly dangerous, but immensely satisfying to fell.

Slay the Spire is a card-based title you definitely don’t want to miss, even if you’re not necessarily fond of the genre. It has a ton of surprises and synergies to explore with a steady improvement curve. As a deck building-roguelike hybrid, Slay the Spire does an excellent job with each respective element holding up each of its systems very well. Without a doubt, I can recommend Slay the Spire to anyone looking for a new addicting adventure.