Konami’s Yu-Gi-Oh! TCG is one of the few Trading Card Games that can proudly say that they’ve been around for more than two decades. What began in North America as a “children’s card game” is a phenomenon that still goes strong today.

While I had a chance to chat with the Yu-Gi-Oh! team and Anime Expo, there wasn’t much being shown in terms of upcoming releases instead it was a way to show off all the different ways new players or even long-time players can play Yu-Gi-Oh! Even cooler you could win some cool prizes just for trying out all the different titles.

For San Diego Comic-Con, Konami had a very similar setup as they did at Anime Expo complete with the various ways to play the Yu-Gi-Oh! TCG and a store where you can purchase some of the recent releases along with an event exclusive game mat, this wasn’t the same one they had at Anime Expo but a completely different one only available for SDCC featuring Seto Kaiba and Blue-Eyes Jet Dragon.

Making it’s debut at San Diego Comic-Con is Yu-Gi-Oh! Cross Duel a 4 player game coming to iOS and Android devices. I didn’t get a chance to play the game personally but I did watch a few rounds trying to get a good idea of how the game works but luckily the trailer gives you a much better idea how this crazy but fun looking free for all works.

And to end our tour of the booth, we were able to see all the upcoming releases for the rest of 2022 and there were quite a few surprises for fans of older archtypes. 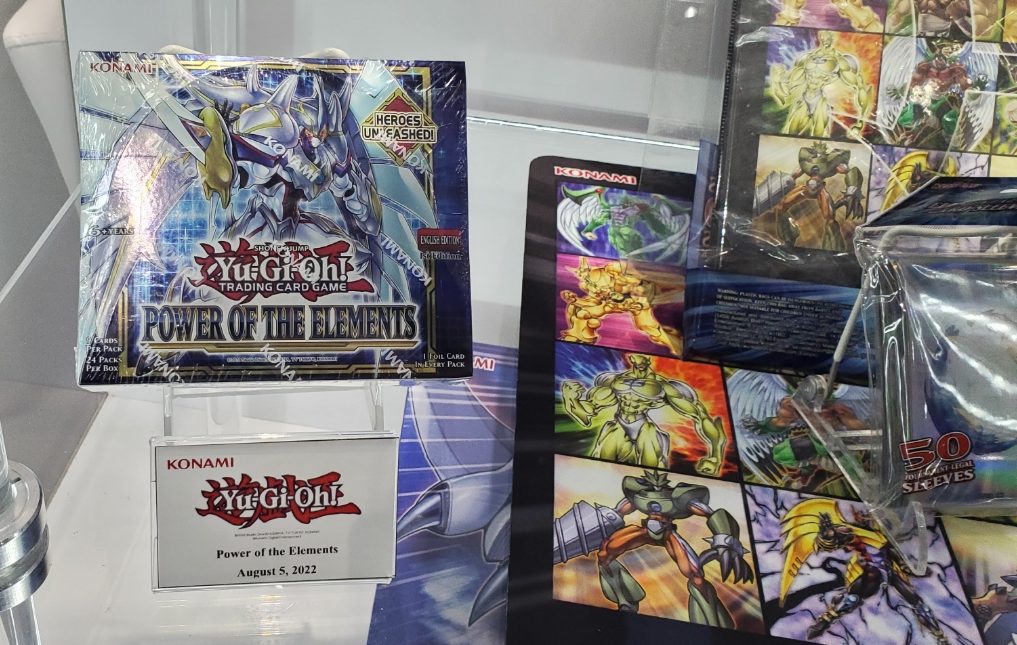 Power of the Elements releases later this week, this set features new Elemental Hero cards along with the Introduces the Vernusylph, Spright, Tearlaments and Ghoti archetype to the TCG.

Also coming later this year will be Tactical Masters as well as the latest tin, Tin of the Pharaoh’s Gods which will include cards from the last year from Blazing Vortex, Lightning Overdrive, Dawn of Majesty, Burst of Destiny along with new artwork for Blue-Eyes White Dragon, Red-Eyes Black Dragon, and Dark Magician Girl.

That’s not all though, fans of Yu-Gi-Oh! GX’s Crystal Beasts and Yu-Gi-Oh! 5D’s have something to look forward to later in the year. Konami will be releasing Darkwing Blast which features new support cards for Blackwings in October and for Crystal Beasts the Structure Deck: Legend of the Crystals in September followed by Battles of Legend which feature the Advanced Crystal Beasts from the anime.

To keep up with release dates and to get more information on the upcoming releases make sure to check out https://www.yugioh-card.com/en/