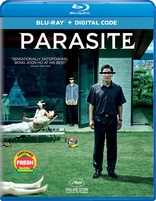 I give the Parasite Blu-ray a B.

The Kim family who were down in the dumps get a proposition from a friend to tutor a rich family’s daughther.  Once they get in and figure out the Park Matriach is naive, one by one the Kim family is hired for positions within the Park Household.  They (Kim Family) go to the point of getting already employed people fired from their position to get another family member hired.  This is done through lies.  When the housekeeper who was fired returns, The Kims find out that they bit more then they could chew.

The trailer I saw (I believe it was a teaser trailer) gave a different genre to this film.  I was going into it thinking this was a thriller on the edge of horror when it’s the complete opposite.  It’s more of a Drama about the struggles of a family and the mess they get themselves into. It is a film that is in the Korean language. Don’t let that stop you as the subtitles were easy to follow and I had no problem being engrossed in this film.

The story line kept me glued to the screen from beginning to end and it was not just because I was reading the subtitles.  The plan that the Kim family orchestrates is pure genius.  How they were able to keep it going for so long without anyone catching on is amazing.

There were moments where I was on the edge of my seat. The scenes where the housekeeper (who was fired) returned to the house unexpectedly and not to mention the Kims almost get caught due to this. I felt bad for the Kims as they were only trying to make a living.  They essentially lived in a poorer part of Korea and was struggling to put food on the table.