OWN THE 4K ULTRA HD COMBO PACK
WITH A BLU-RAY™ AND DIGITAL CODE ON JUNE 2, 2020
FROM UNIVERSAL PICTURES HOME ENTERTAINMENT

What else can be said about Steven Spielberg’s venerable classic, JAWS that hasn’t been said already? This classic film is credited with spawning the blockbuster season in the summer of 1975 while simultaneously striking fear in beachgoers for over four decades. JAWS is one of those rare films that stands the test of time and has become a cultural phenomenon spawning three sequels. To celebrate the 45th anniversary, Universal Pictures is releasing JAWS 45th Anniversary Limited Edition on June 2nd in 4K Ultra HD Blu-ray just in time for the summer season! 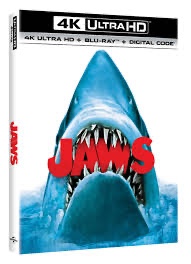 Director Steven Spielberg’s second feature film JAWS is based on the best selling novel of the same name written by novelist Peter Benchley. There have been historic tales of the plagued production ranging from a curmudgeon Robert Shaw torturing fellow actor Richard Dreyfuss, to multiple issues while trying to film at sea, and of course, Bruce the mechanical shark repeatedly failing to properly operate during principal photography. With the varied production issues, Spielberg was able to deliver a film that masterfully builds from a dark unknown underwater attack in the opening of the film, to a climactic crescendo of man versus beast with man clearly out of his element. JAWS also marks the second time Spielberg and iconic composer John Williams collaborated with William’s providing a two-note score that gave the listener a sense of dread as the great white glides through the salty water stalking its prey. JAWS was nominated for an Oscar for best picture and although it lost to another classic, film One Flew Over the Cuckoo’s Nest, JAWS took home three Academy Awards including Best Original Dramatic Score, Best Sound, and Best Film Editing.

One may ask “If I already have JAWS on DVD and or Blu-ray do I really need to buy this one?” We say unequivocally, YES! The picture and sound quality exceed the Blu-ray and DVD versions. The restoration is a wonderful compliment to JAWS with a noticeable refined and sharper image. One would highly recommend picking up the 45th-anniversary edition and adding it to your movie library. 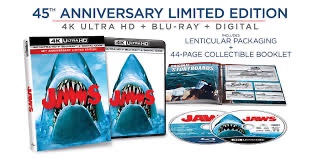