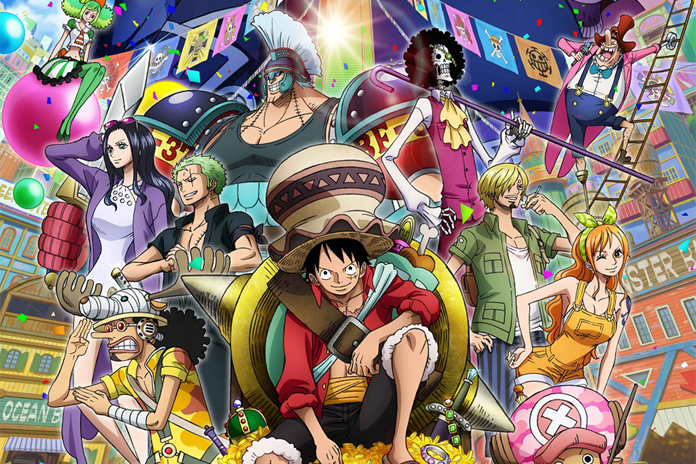 For more than 900 episodes (959 chapters give or take), Luffy and the rest of the Strawhat Pirates have been on the search for One Piece, the treasure left behind by Gol D. Roger and a long they way they have met many many faces that have become beloved by the fans. The latest film One Piece: Stampede is a love letter to the fans as it pays homage to the entire series and does so in the way that reminds me just how amazing the ride it has been. Best of all it brings back so many familiar faces even if only for a short time, including many we haven’t seen since before the time skip.

The biggest celebration of pirates has arrived known as the Pirates Festival! The organizer Buena Festa has a huge surprise in store, an epic treasure hunt that seems to have ties to Gol D. Roger and this has led nearly the entire pirate world to gather as the event begins once an island appears out of nowhere as various pirates race to get to the treasure first.

One Piece: Stampede is the 14th film in the series, while the series also celebrates its 20th anniversary and this film doesn’t disappoint in terms of action, excitement and nostalgia. There are a few names that appear, I won’t spoil any of them outside of what was shown in the trailers like Crocodile, Boa Hancock and Mihawk, I couldn’t wait to see what role they would play in the film.

One of the main villains of the film is Douglas Bullet, who is also known as the “Demon Heir,” he is a former member of Gol D. Roger’s crew who only believes in strength, to be precise his own and challenges everyone to come at him all at once. He’s not the most interesting villain of all time but he serves as the perfect reason for rivals to come together to take him down and it doesn’t disappoint, especially when he unleashes the ability of his Devil Fruit.

– It’s the Journey, Not the Destination.

There is never a dull moment from start to finish, even the ending has its Oh my God moment that left a small tear in my eye, to put it simply it is one big celebration of the legacy of One Piece done perfectly by series creator Eiichiro Oda who takes it up to the extreme with fast paced battles, hilarious moments and some very memorable scenes.

It’s always impressive to see One Piece on the big screen, the characters are so well drawn out compared to their television counterparts and I always love the unique costumes they wear in the movies. I loved seeing characters we haven’t seen since the time skip get updated designs such as Boa who still looks as amazing as ever.

One Piece: Stampede also has an amazing voice cast behind it, I’ve always been drawn more to the Japanese voice acting but the Dub is just as enjoyable. Both the Dub and Sub will be shown during the limited time screening so you can pick whichever you prefer and you won’t be disappointed by either one.

A must see for fans of the series as this is a love letter to all those who have been with the series from the start, while giving newer fans who might have started later or might not have caught up just yet something to show why they need to watch One Piece.