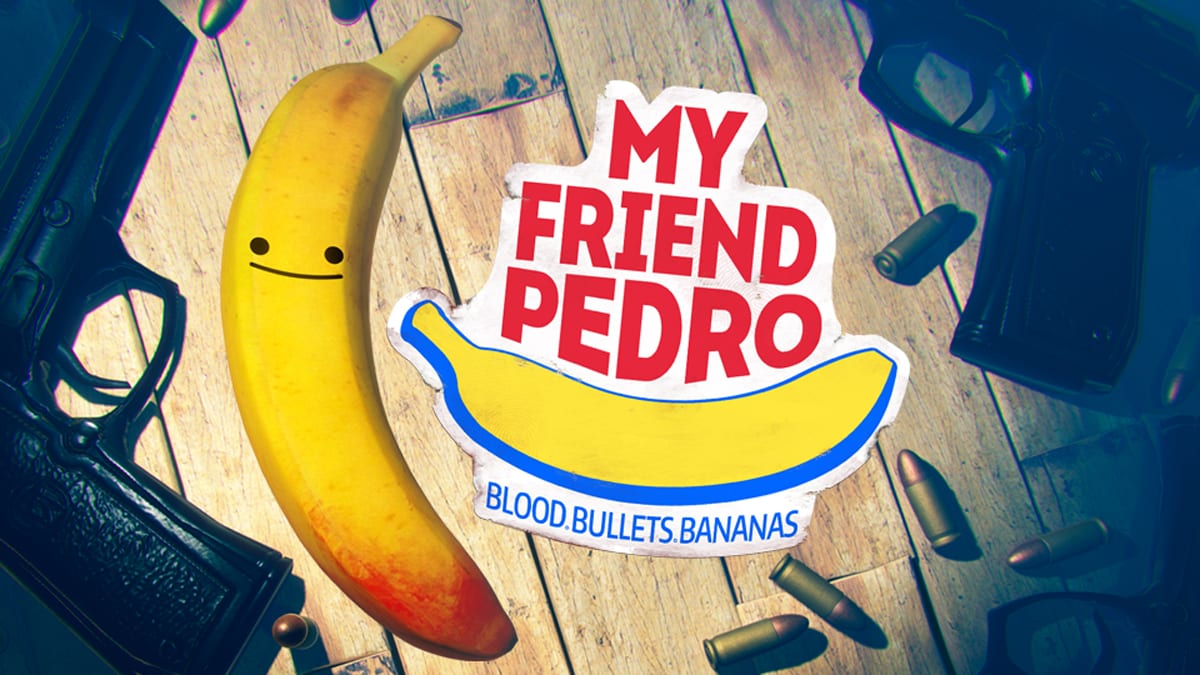 My Friend Pedro Review – Going Down the Rabbit Hole

My Friend Pedro, from developer Deadtoast and publisher exciting publisher Devolver Digital, is what I image in feels like to pull off death defying moves in the Matrix with a protagonist who could fit the Deadpool bill. As you make your way through multiple locations, there is a plethora of bullets, destruction, humor, and features a sentient banana friend, Pedro. While it is a short adventure, there wasn’t any time while I was playing that felt wasted or dull. This is pure gaming action at its finest. 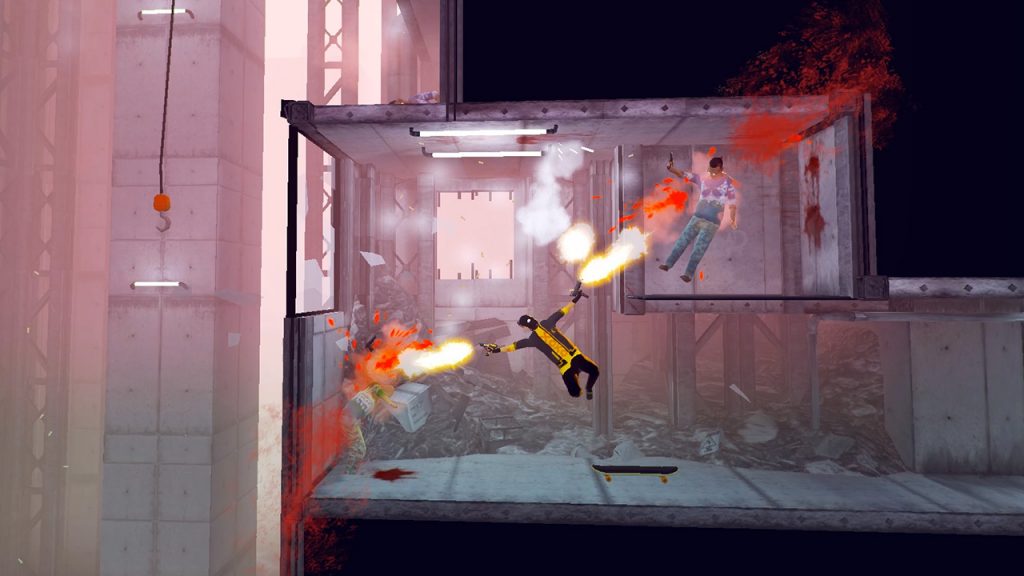 The story in My Friend Pedro is straightforward, but I’ll only scratch the surface on the narrative as I don’t want to give any major spoilers to the clever writing. You play as a nameless assassin who has lost their memories and now following the orders of his friend, a banana named Pedro. As you make your way through the 40 missions, you’ll slowly unravel the truth of your past and why you’re going on this murderous rampage.

Much of My Friend Pedro is presented as a fever dream or a bad drug trip, and this leads to some clever humor and bizarre scenarios that will definitely have you grinning. It takes you on a wild adventure that’ll have you laughing along with the outlandish nature of the narrative and crazy gameplay elements. While some people might scoff at a 4-6 hour length, I think My Friend Pedro’s length should be celebrated as it keeps the focus on the fun gameplay. 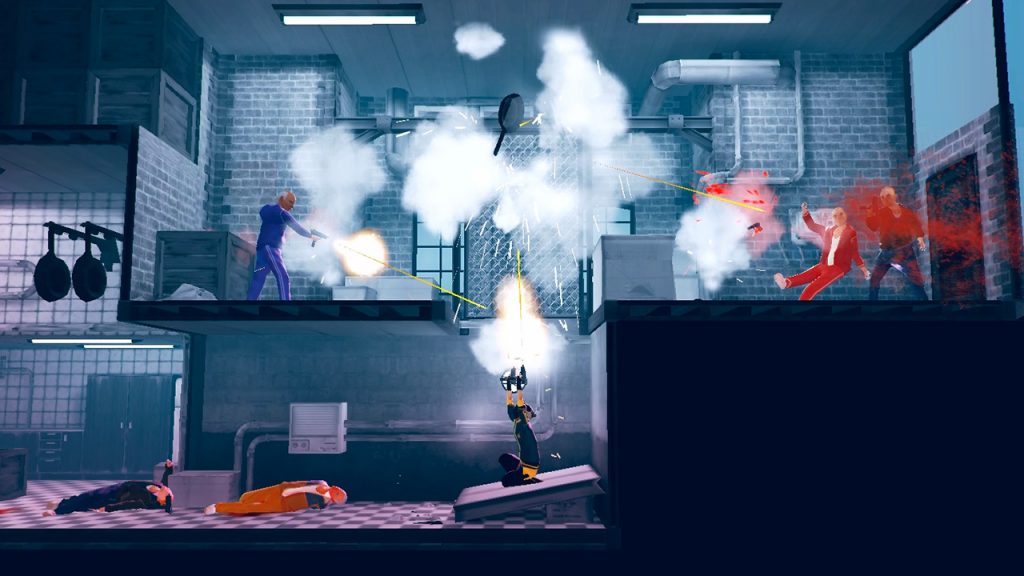 Speaking of gameplay, My Friend Pedro is a 2D platformer shooter with an amazing amount of control at your fingertips. While playing you’ll be running through levels shooting all enemies in sight, platforming your way to safety, and dodging a ridiculous amount of bullets along the way. You could say many other titles have already done gameplay like this before, but what makes My Friend Pedro standout is its ability to integrate the slowdown meter that is used in a variety of action flicks.

With the press of the L3 or left stick, time slows down and you’re able to more precisely maneuver not just your aim but your body too. You will learn quickly how to perform flips in mid-air and rotating to dodge bullets, all the while double aiming at two different guards across the screen. The combat is absolutely bonkers and once you get the hang of it (which happens quickly) is immensely fun and precise. 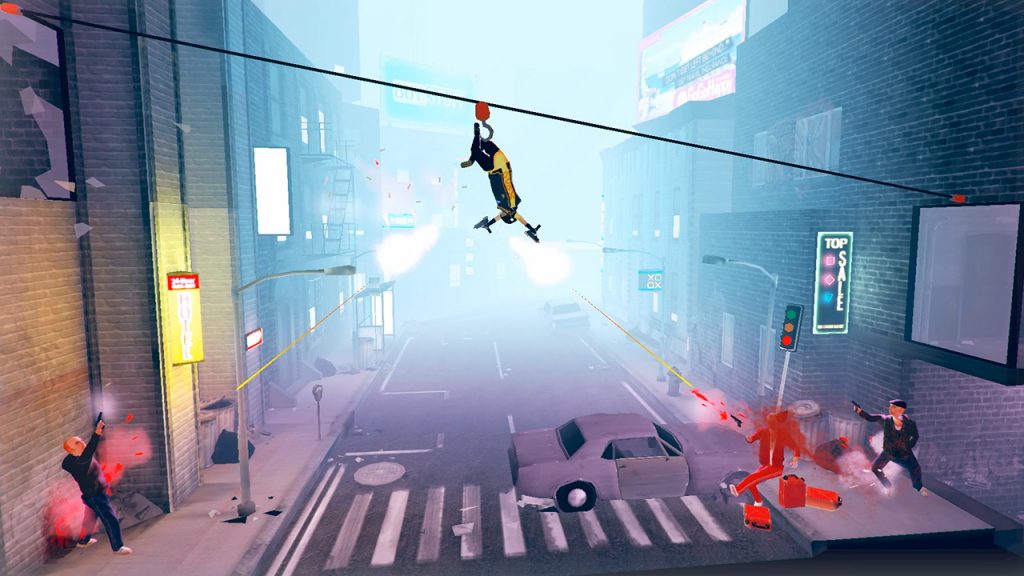 Shooting combat is the constant throughout the gameplay with you firing your primary weapon with the right shoulder button and aiming with the right stick. What the gameplay closely resembles is a twin-stick shooter, but only in the 2D plane. With the press of the left shoulder button you can also lock onto enemies or interactable objects scattered throughout the stage that play a bigger roll in the overall platforming.

As you continue along in the story, you’ll find and unlock new weapons, such as a sniper rifle, double handgun combo, and machine guns to unleash a ballet of bullets upon your unsuspecting foes. These new weapons are located in various areas and act as a way to freshen the gameplay not only in combat, but even in platforming. I was impressed by how much My Friend Pedro manages to integrate its many gameplay features into moments you normally wouldn’t expect. 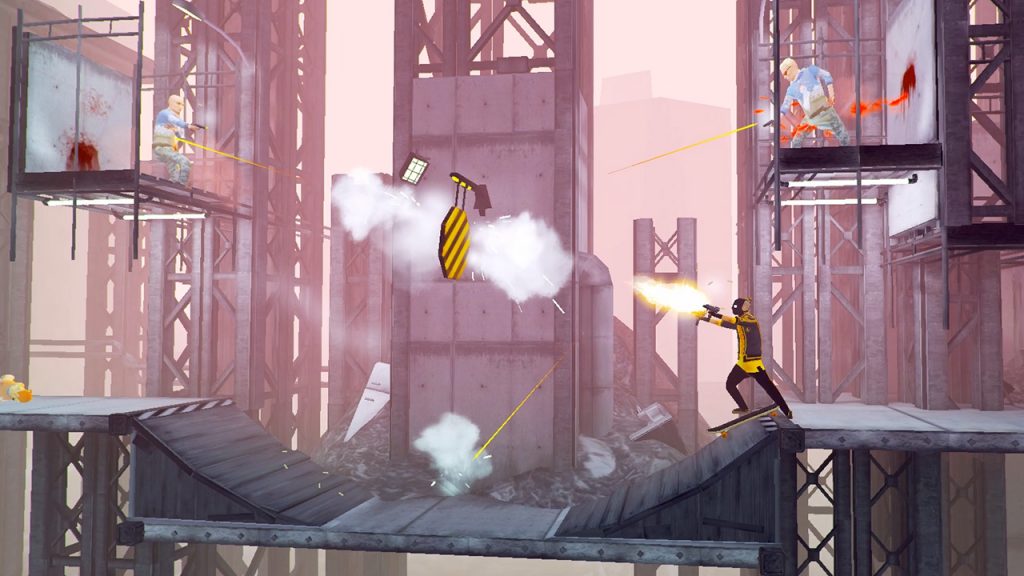 Platforming is heavily focused on physics based puzzles that’ll have you rolling, wall jumping, and even using your weapons to shoot levers across in different locations. These core mechanics are then fleshed out as you progress through the campaign and the gradual learning curve is about perform in execution where I never felt overwhelmed, but gameplay still felt consequential as I continued on. I was pleasantly surprised with every new platforming mechanic introduced and just when I though I had seen everything, there were different gameplay scenarios like lasers or even skateboarding that changed up the gameplay entirely.

My big takeaway with My Friend Pedro is the amount of variance in gameplay systems and just how successfully it actually is in providing a 4th wall-breaking humor-laden experience similar to Deadpool. There is a scoring system that also plays into the campaign. As you perform crazy acrobatic maneuvers and kills, you’ll earn points for your style and time to completion that tally up to a final score. These are then uploaded to the online leaderboards which are categorized by difficulty and make for extra incentive to go back and earn higher scores. If you are a high score chaser, this will be your main reason to replay the campaign as there’s not much last effect after completing the story unfortunately.

Visually, My Friend Pedro features a wide color palette that seems bland at first, but really opens up as you progress. Early stages appear dark and gritty, but later sections start to imbue new color patterns that really provide some pop to the overall graphical presentation. While it certainly isn’t the best looking game with jaggy edges of characters and occasional frame rate stutter, it never hindered my enjoyment and successfully performing the right moves were not a problem. 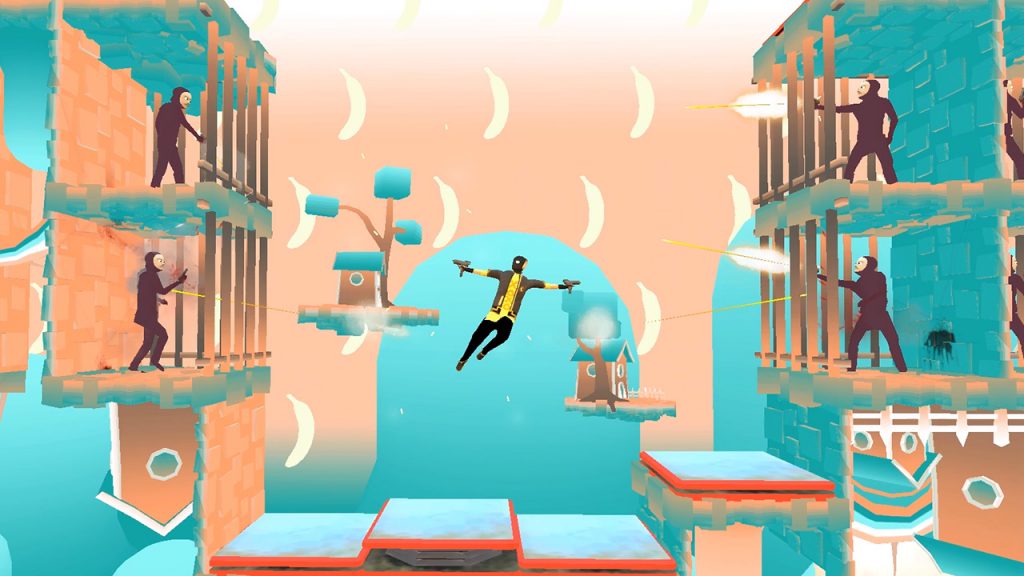 The music features a heavy mix of percussion and bass riffs/beats. I never thought the music was truly memorable, but they still fit the mood and presentation of My Friend Pedro. They did well with capturing the ambience of a bad guy’s warehouse, a grimy nightclub, or even sun scorched rooftops. The attention to detail when activating slowdown time was very cool with the music tempo slowing down with only the sound of bullets piercing the background.

My Friend Pedro has been in development for a long time, but it’s great to see the final product live up to the hype. It is fun, quirky, and hilarious to play, with clever gameplay mechanics and an engaging narrative. While it will only take a few hours depending on your proficiency, My Friend Pedro is absolutely time well spent and makes for an engaging adventure that will have you wanting to talk about the story with others who have played.