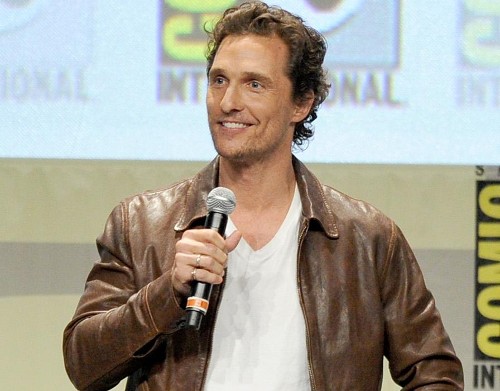 It was a surprise that seemed straight out of the outer space wormhole depicted in their new buzzed about sci-fi space epicInterstellar. Oscar-winning actor Matthew McConaughey and Batmantrilogy director Christopher Nolan stopped by for an unscheduled visit at Comic-Con’s packed Hall H on Thursday afternoon. It was the first time at Comic-Con for both the actor and director.

Laid back as usual, the actor did his best to explain the film without giving too much away. (It’s the most he’s said about the Nolan project to date — which is set in a dystopian future where a dust-covered Earth is struggling to sustain life.)

“I play an engineer and widowed father of two children,” explained the 44-year-old actor, who in the footage shown, is sent into space along with a fellow explorer, played by Anne Hathaway. “He’s also living in a time when humanity is just trying to sustain. We need food. We need water.” For his character, the potential of saving the earth from extinction is “the greatest mission he has ever taken on.”

How did the Dazed and Confused actor get involved in the project, which is all ready generating Oscar chatter? McConaughey was in New Orleans when Nolan approached his agent to see if he might be interested, and he immediately flew out to meet him in Nolan’s Los Angeles home.

“I go meet Christopher for three hours,” said McConaughey “We didn’t talk about a film or anything. After I left I was thinking, ‘What the hell was that about?’ A few days later got the script, liked it, and I was in.”

Nolan, whose appearance at the annual pop culture gathering in San Diego excited the crowd almost as much as McConaughey’s, citedStar Wars, Blade Runner, and most significantly 2001: A Space Odyssey — a film he saw as a child with his father — as his biggest influences. “It was such a memorable experience for me to go on that journey in that way,” said Nolan.