Konami goes all out at Anime Expo with Yu-Gi-Oh! booth

As far back as the Entertainment Hall has been a thing at Anime Expo, Konami has had an area for players to participate in various Yu-Gi-Oh! events but this year that changed as Konami had a much larger setup that is almost similar to what they do for San Diego Comic-Con.

It’s a very welcome change, the awesome artwork all around, the more open space where fans and newcomers can hang out and chat but more importantly there were a few different ways to play Yu-Gi-Oh! or even purchase a few items at their store.

If you had a deck on hand at Anime Expo, you could challenge a pro player in Duel the Master and see how you rank against someone like Billy Brake or Esala Wathuthantrige. If you wanted a simpler way to enjoy Yu-Gi-Oh!, Speed Duel is an alternative as it focuses less on the competitive Yu-Gi-Oh! experience without an extra deck.

If you prefer digital games, Konami had a Master Duel set up as well as a new titles Rush Duel based on the new Yu-Gi-Oh! Sevens anime.

Playing any one of the activities at the Yu-Gi-Oh! booth rewarded you with a coin that could be redeemed at the gacha machine and depending on how lucky you are, you could walk away with a special prize which included a Nintendo Switch OLED, sleeves, pins, a scoreboard notepad and plenty of other goodies. 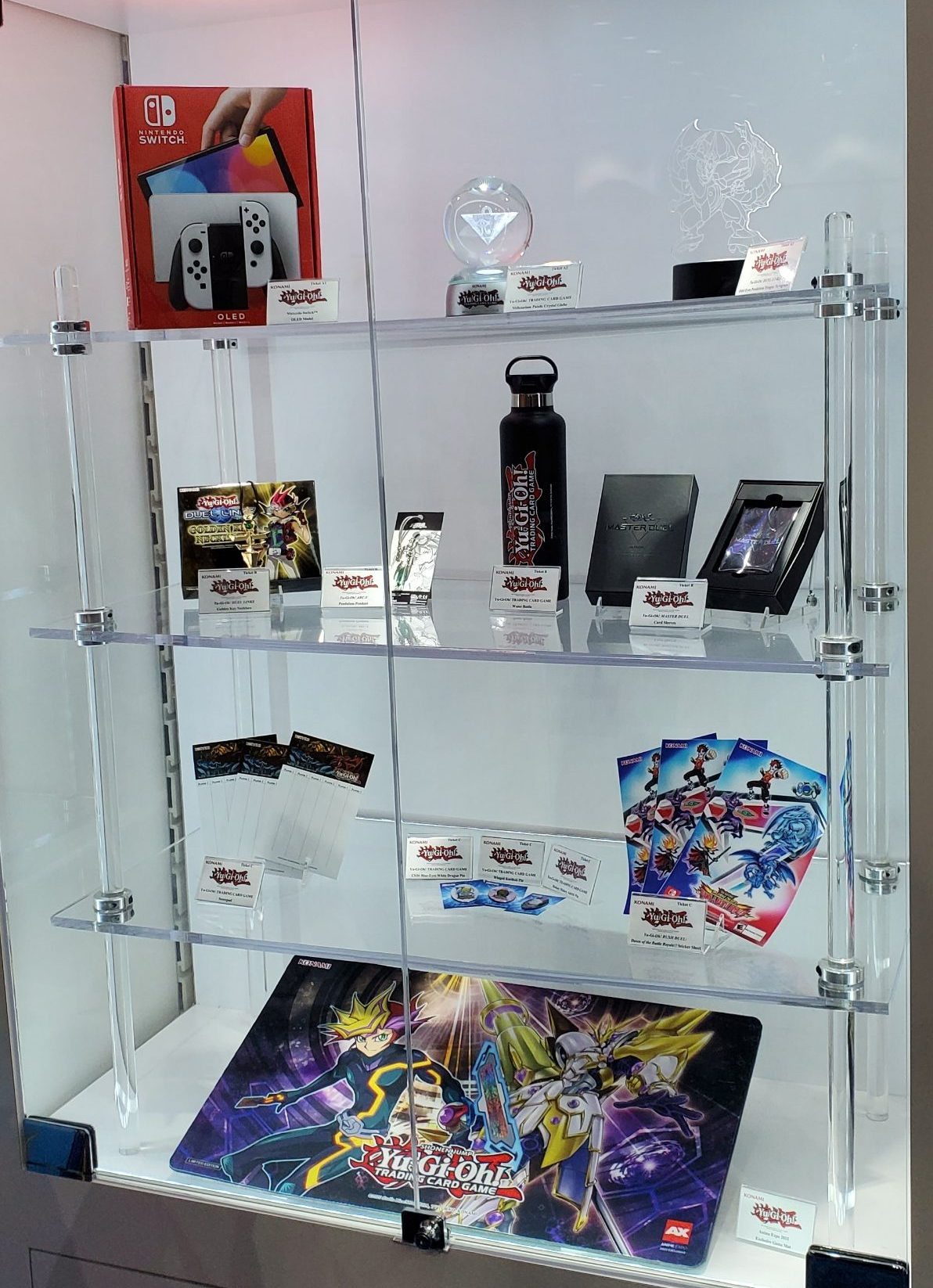 We’ll have to wait until San Diego Comic-Con to see what Konami has in store for the release of 2022’s releases. I was however excited to see there will be more hero support coming later this year, so the GX fan in me is pretty excited to change up my Hero deck.

I did have one last question, something that piqued my curiosity with the release of Hidden Arsenal: Chapter 1 and that was the return of Duel Terminal rarity cards.

If you aren’t familiar with the Duel Terminal, it was a very cool thing Konami released back in 2008-2009. It was a type of arcade machine, you would put in a dollar and in return, you would get a card. The card was unique it had prismatic dots all over it and come in three different rarities: common, rare, and ultra-rare.

The Duel terminal cards was what everyone was after especially in later releases, it’s where you could get certain powerful cards first and because of how few Duel Terminal machines were out there some of the cards would be quite expensive so it was worth the chance to put in $20 and hope to pull a few cards that were worth a lot more but until the release of Hidden Arsenal, none of these cards were tournament legal.

By 2013, Konami was done with Duel Terminals. There are still some out there in certain stores as a cool novelty but with that, the prismatic rares were long gone….that is until now. So I had to ask, so what led to the decision to release the Duel Terminal cards?

The simple answer was to give new players a chance to own a different rarity of some awesome cards and gives players a chance to purchase some older rarer cards once again. Konami has introduced various rarity of cards outside the usual common, rare, super rare, Ultra and Secret with things like Ghost rare, shatterfoil and of course the very sought-after prismatic secret rare.

We’ll have to wait until San Diego Comic-Con to see what Konami has in store for the release of 2022’s releases. I was however excited to see there will be more hero support coming later this year, so the GX fan in me is pretty excited to change up my Hero deck.