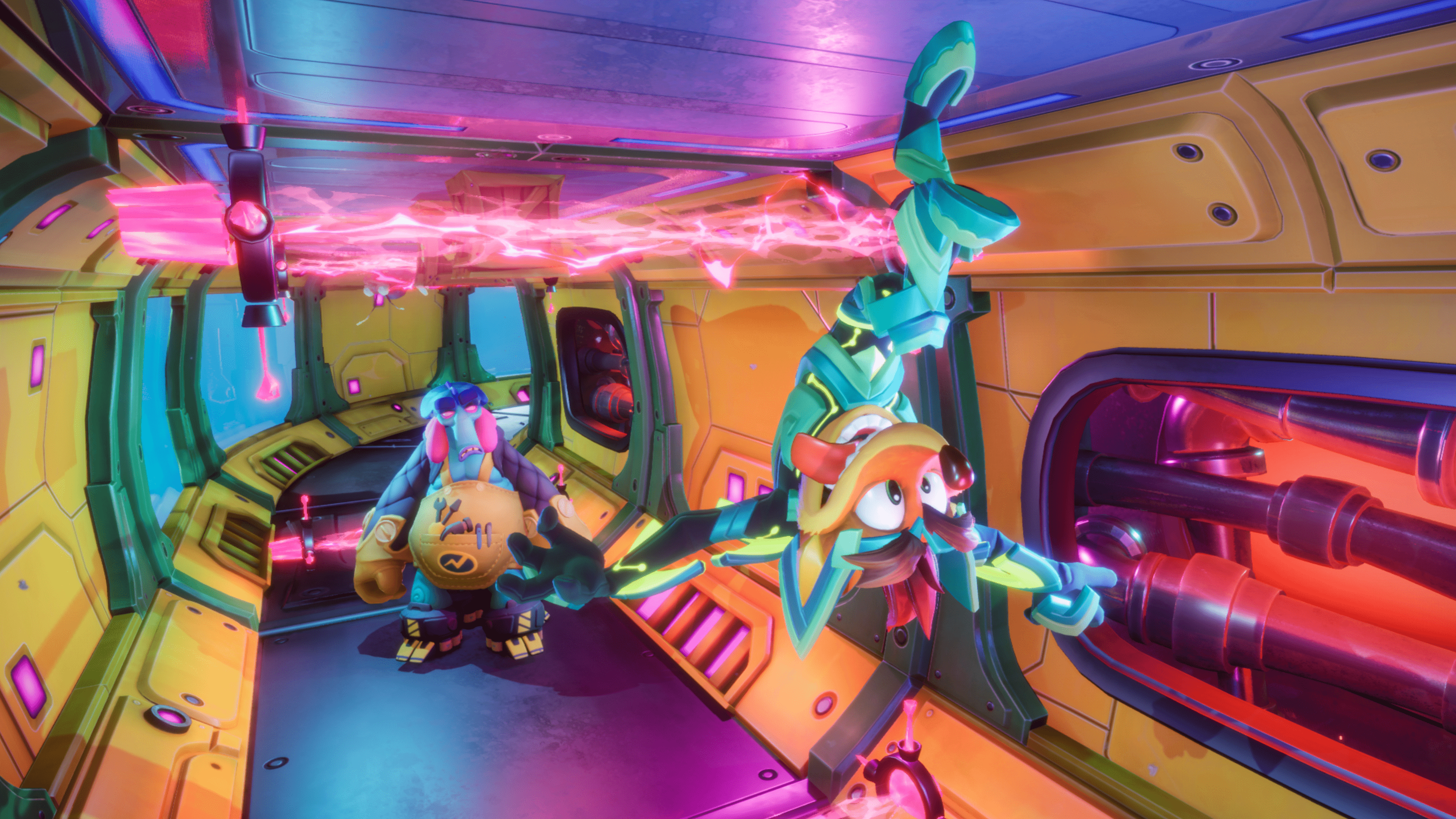 Crash Bandicoot 4: It’s About Time Review, Return of The King

Announced at the beginning of the summer, Crash Bandicoot 4 took the gaming community for a loop with not only its continuation from the previous mainline game Crash 3: Warped but with its seemingly natural evolution of our favorite bandicoot.

Would the game survive a sequel after a 22 year wait? How would developers Toys For Bob who had previously brought back Spyro modernize the fossil of a series to offer a new experience not only to long time fans but new players as well?

Luckily Crash 4: It’s About Time meets a fitting compromise between the two ideas and offers one of if not the best platformer formula to date.

Crash Bandicoot 4: It’s About Time follows Crash and Coco following Crash 3 in which Neo Cortex is banished to another time with N. Tropy and Uka Uka. During that time N. Tropy and Cortex escape and begin to tinker with alternate universes in a plan to start it from scratch and become gods. Unfortunately once Crash and Coco get a whiff of trouble you can consider those plans foiled with the duo hopping between dimensions to get to the bottom of the sudden appearances of these rifts. 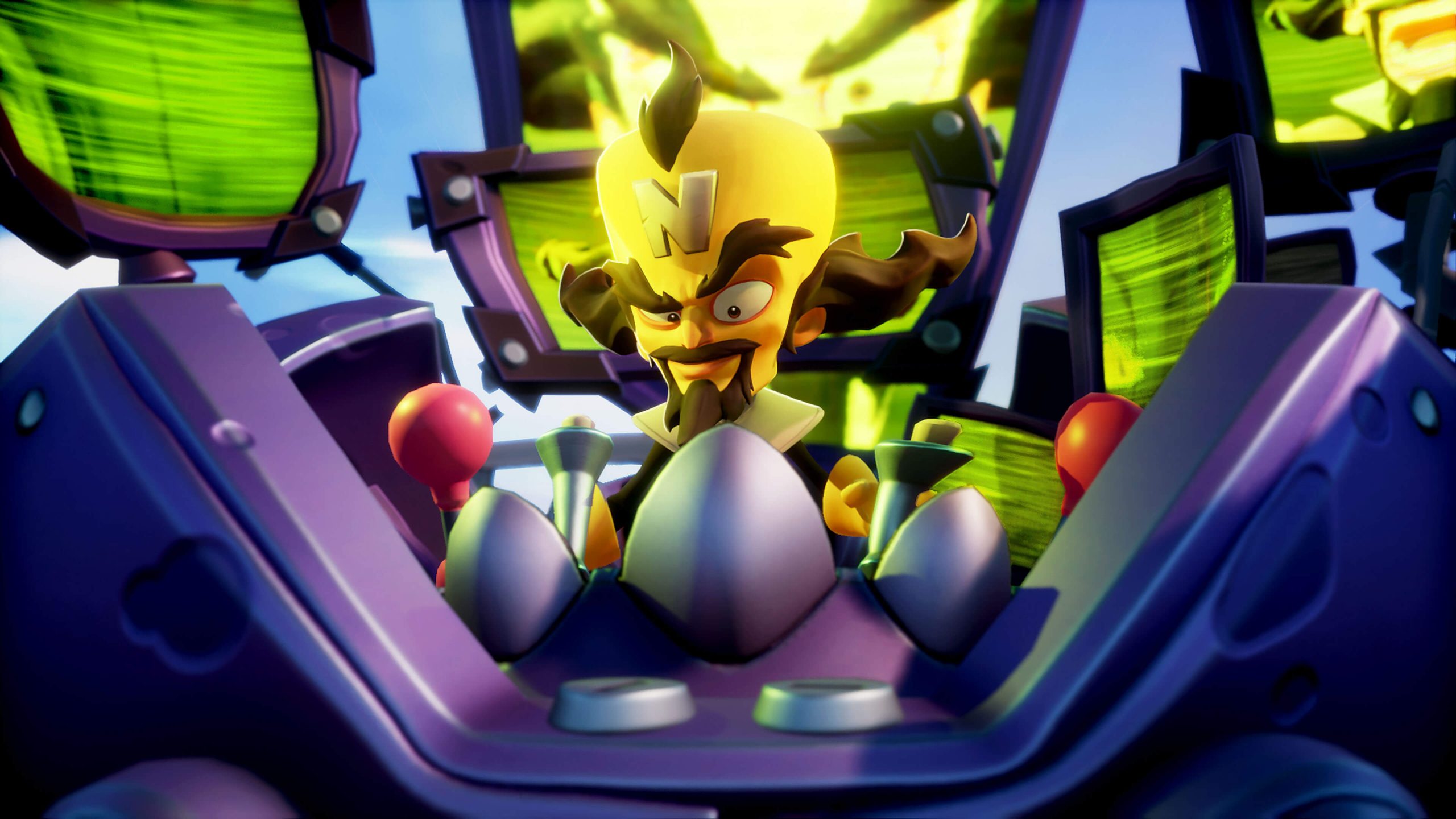 For starters, Toys For Bob has, in my opinion, created the perfect in-between of a platforming game and a somewhat freemium styled system for completing levels. Each level offers several gems(goodbye power crystals) for various achievements such as collecting wumpa fruit, breaking boxes, amount of deaths, and even a few hidden ones along the way. The option to switch to retro mode with fixed amount of lives is still present and I did start the game with it but as the levels continued to become larger and much more occupied I decided to switch over and hold off on 100%ing levels until after my first run as the developers intended.

Crash 4 introduces Quantum Masks similar to that of the Elemental Masks from Wrath of Cortex back in 2001(feel old yet?) the difference being these masks help you. Voiced by several talents including Invader Zim actor Richard Horvitz these masks offer Crash several new mechanics that eventually make up the majority of each level in remarkably clever and sometime new ways.

The first mask Lani-Loli allows players to shift between realities and offers an altertating-like mechanic for crates and platforms, Akano offers risky jumps and an infinite spin and with some of the coolest section transitions I have ever seen in a platformer, Kupuna-Wa slows time for a brief moment making fast moving platforms and enemies a new challenge, and Ika-Ika alters gravity making some levels multifaceted with the ceiling in some cases being an alternate path.

Introducing so many mechanics that quickly should be near impossible to space out organically yet Toys For Bob excels at it. Look at Sonic Colors and the Wisps for example; ever since their addition they have been a mainstay for the franchise and although they have been around for so long they still don’t feel natural to the overall tone of the franchise. With Quantum Masks now introduced in the Crash Bandicoot universe I don’t think I can go back to previous titles now.

Toys For Bob made a nearly perfect platformer by throwing so many ideas all at once while also making sure each mechanic has time to grow and with that time the endgame of Crash 4 offers some of the most fluid and fun platforming I have played in years. And when you add so many new ideas to the pre-existing fundamental pillars of gameplay for the Crash Bandicoot platforming formula you get limitless possibilities.

The End Is Not The End

The main story for Crash Bandicoot 4: It’s About Time comes to an end at around 6-8 hours but the real challenge comes after you complete the game in which the universe is your oyster. At that point players will have multiple way to play through the game with more urgency and much more challenge. N. Verted mode takes the player through the same level previously completed but flips it on it’s head with a new artstyle and a flipped perspective meaning each level is subtly different. 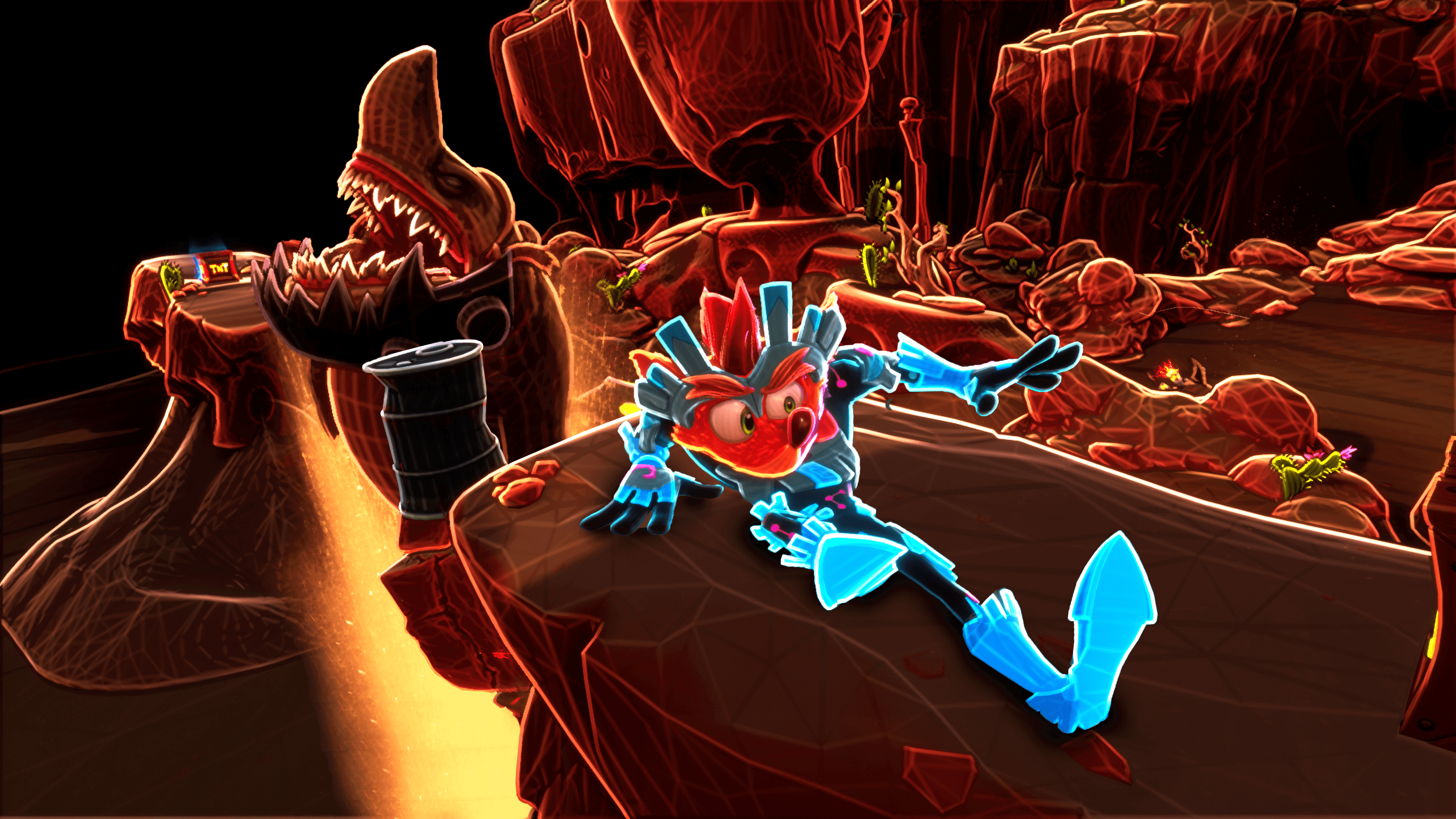 N. Verted mode gives a lot to the playability of Crash 4 as it offers players yet another hurdle for completionists on the road to collecting everything that this game has to offer. Along with the original motivation to smash every box in each level, complete time trials, and collect all of the secret gems, N. Verted mode truly is the next level of post game Crash Bandicoot.

Too Many Costumes To Count

If there was one last thing to talk about it would be the insane amount of unlockable costumes scattered throughout each level and challenge. Crash and Coco each have 29 costumes to collect throughout the game with one in each level as a reward for reaching 100% completion giving more purpose to each challenge than just a trophy and a sense of accomplishment. My personal favorite skins are the classic skins(can’t beat nostalgia!) while some of the newer ones have been made to go with the themes of the level they are unlocked in.

Toys For Bob has so much source material to play with that there are actually several ways to play Crash 4, most notably as an alternate dimension version of Crash Bandicoots girlfriend(?) Tawna. Each characters approach to some levels may intersect with Crash and Cocos making for some pretty neat bilateral storytelling.

Tawna’s levels offer a mix of long range quick grappling adventurism and classic crash level design make for sprawling locations that are often not thought about when playing a Crash Bandicoot level. Neo Cortex is playable again for the first time since Crash Twinsanity and offers quite a bit of variation compared to every other character playable in this game.

Each Cortex level is made to make use of his blaster that can turn enemies into sturdy platforms to jump on or into gooey platforms to bounce higher on. Cortex levels are easily the most bland in the game with each level tailored to these mechanics rather than the mechanics being tailored for the level making some of them feel a bit sluggish and quite boring. 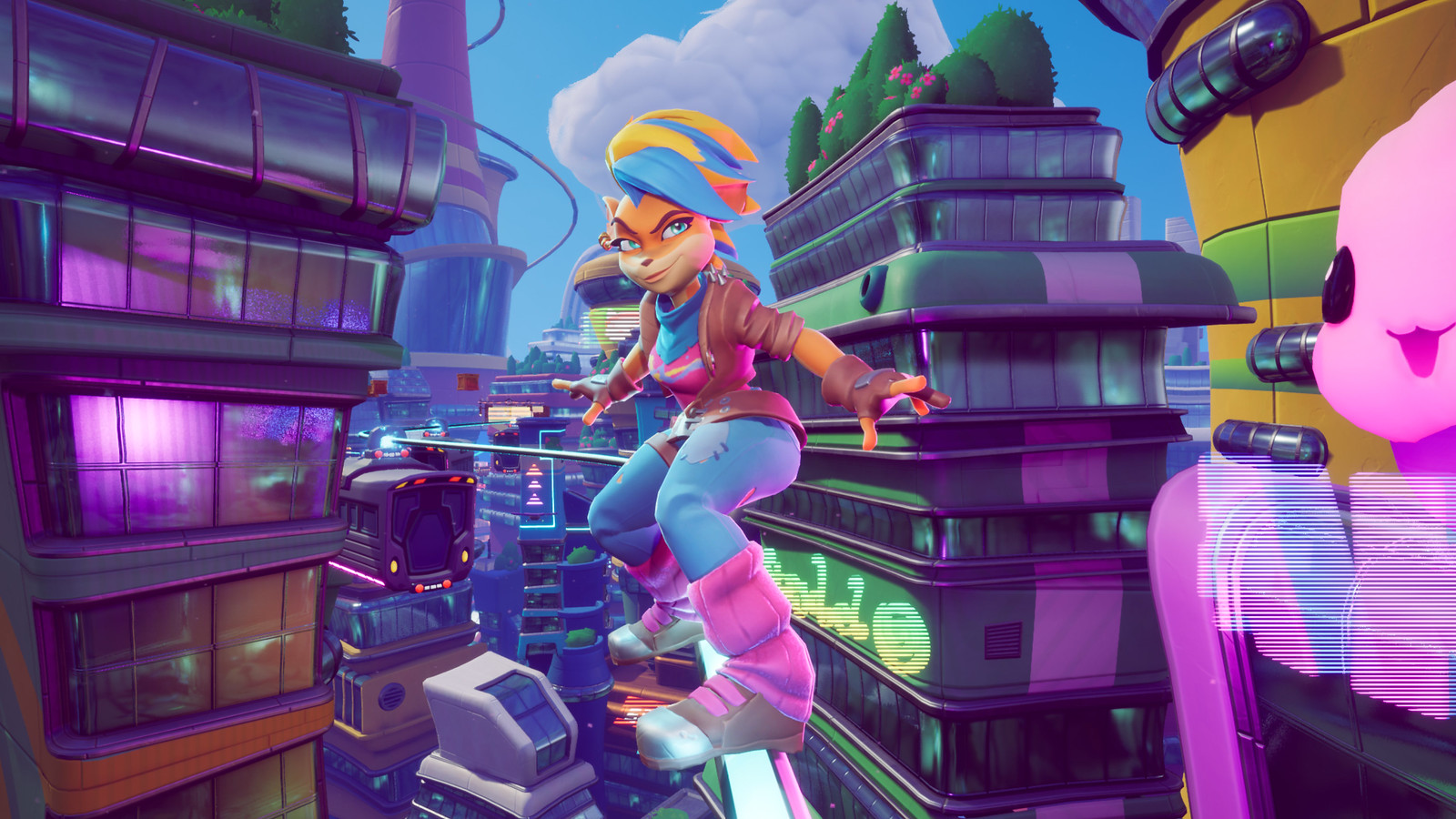 The true star of Crash Bandicoot 4: It’s About Time is the previously retired boss Dingodile. In Crash 4 Dingodile is living a life of relaxation and living the dream with his own restaurant until certain events cause the restaurant to go up in flames which brings everyones favorite mutated crocodile(dingo) out of retirement. There’s something about Dingodile’s personality in this game that I find so fun and enjoyable whether that would be his voice actor’s performance, his writing and how they humanized such a despicable character, or simply his level design.

Dingodile’s level design is a more simplified version of the typical Crash levels but offer a new moveset to complete each level with. Dingodile’s main weapon is his vacuum cannon which has the ability to suck up crates and even grab tnt crates to throw at targeted areas and enemies. His vacuum cannon also has a hover and double jump ability that needs a little time to get used to but once you have it down it is so fun to play with. 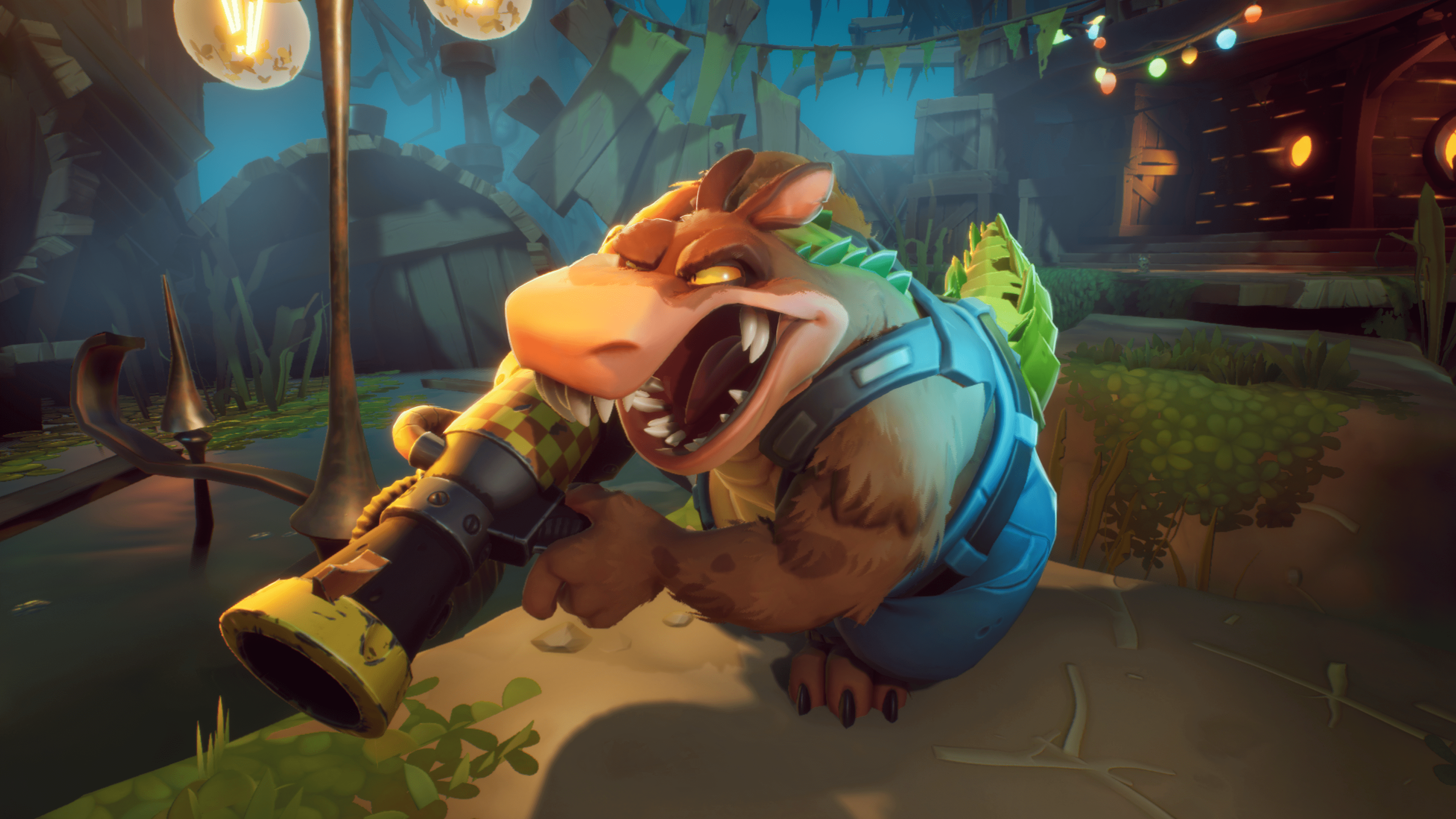 Crash Bandicoot 4: It’s About Time offers an N. Sane amount of content within its universe and somehow caters to old and new fans alike. The combination of challenging implementation of new and old ideas with the newly revamped focus on atmosphere make for one of if not the best Crash Bandicoot titles to date. 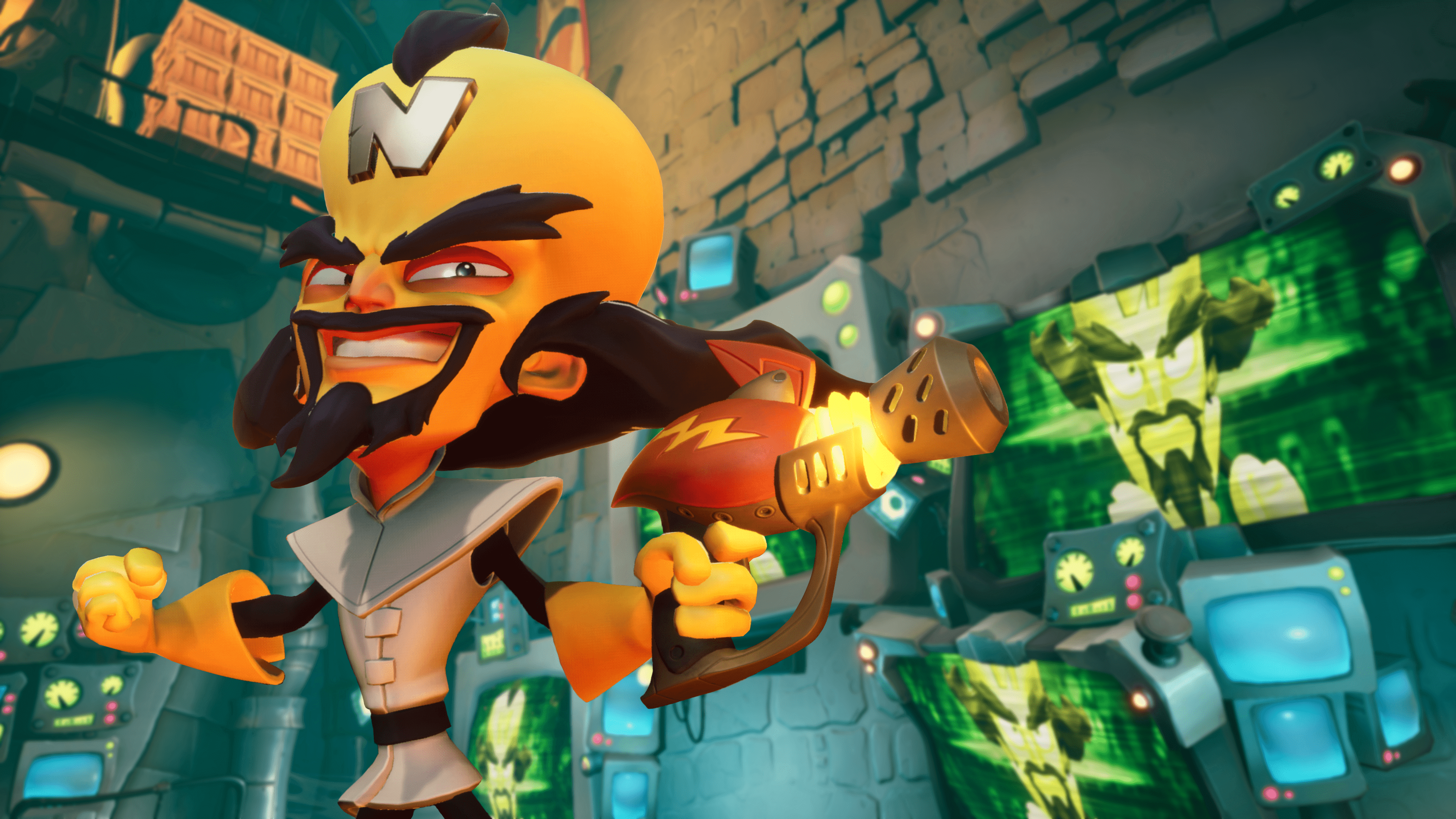 Some levels don’t mesh well with a few of the newer ideas such as the case with earlier stages or the grinding segments but once Toys For Bob get a chance to put their orchestration of ideas to work it becomes a platformer that rivals some of the newest platforming greats like Donkey Kong Country: Tropical Freeze and Yooka Laylee And The Impossible Lair. In the future I hope Activision can yet again look to Toys For Bob for another Crash Bandicoot title because, for the first time in a long time, I feel safe knowing that our favorite orange marsupial is in good hands.