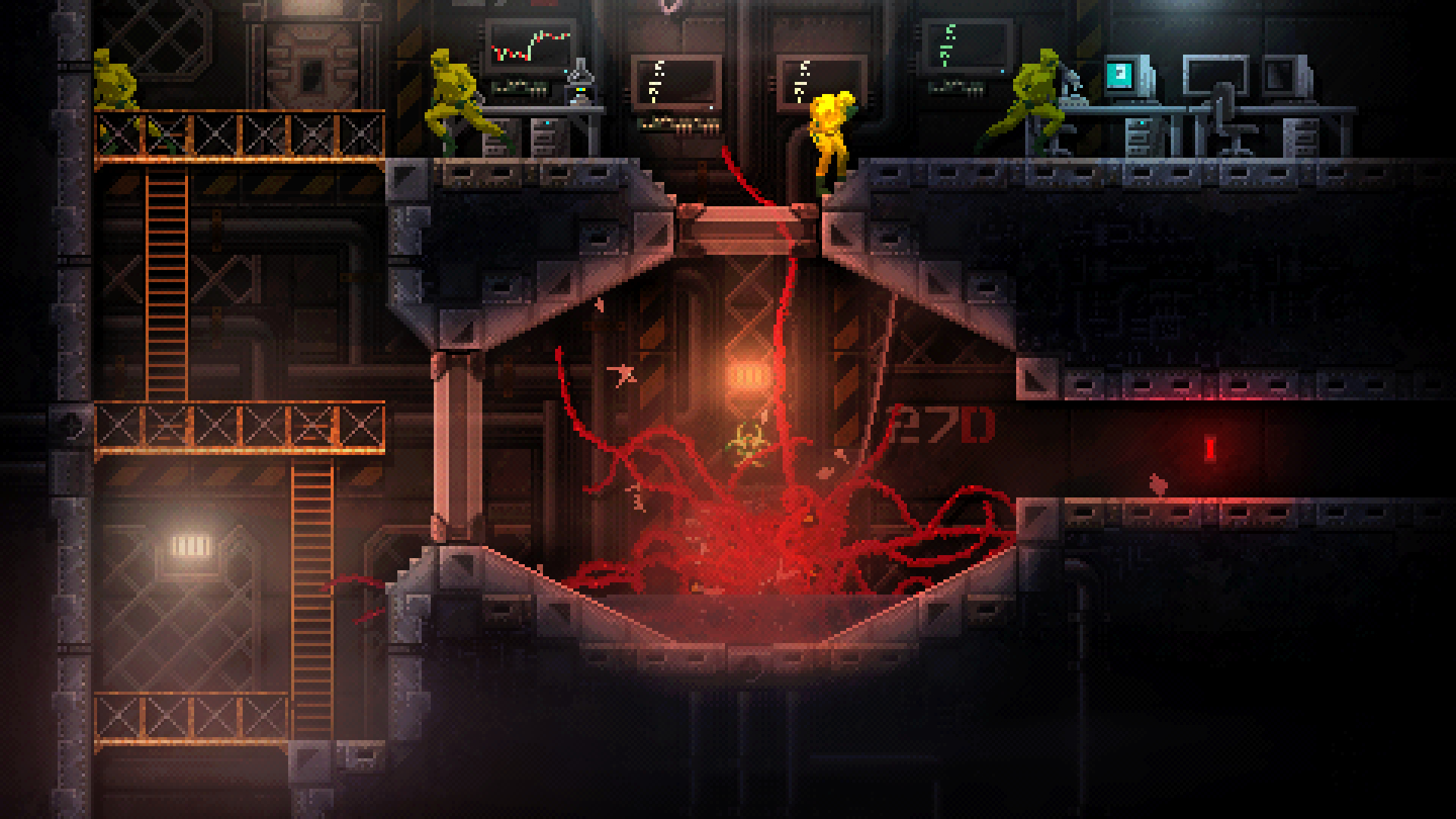 Carrion Review – A Monstrosity of a Game

You know what the problem is with video games these days? Too many heroes. Thank goodness Phobia Game Studio realized this gaping flaw and made Carrion, a game where you play as a tentacled monster who’s escaped captivity in a secret facility. You’ll be going through different sections of the lab, solving puzzles, gathering new powers, and destroying anything that gets in your way. 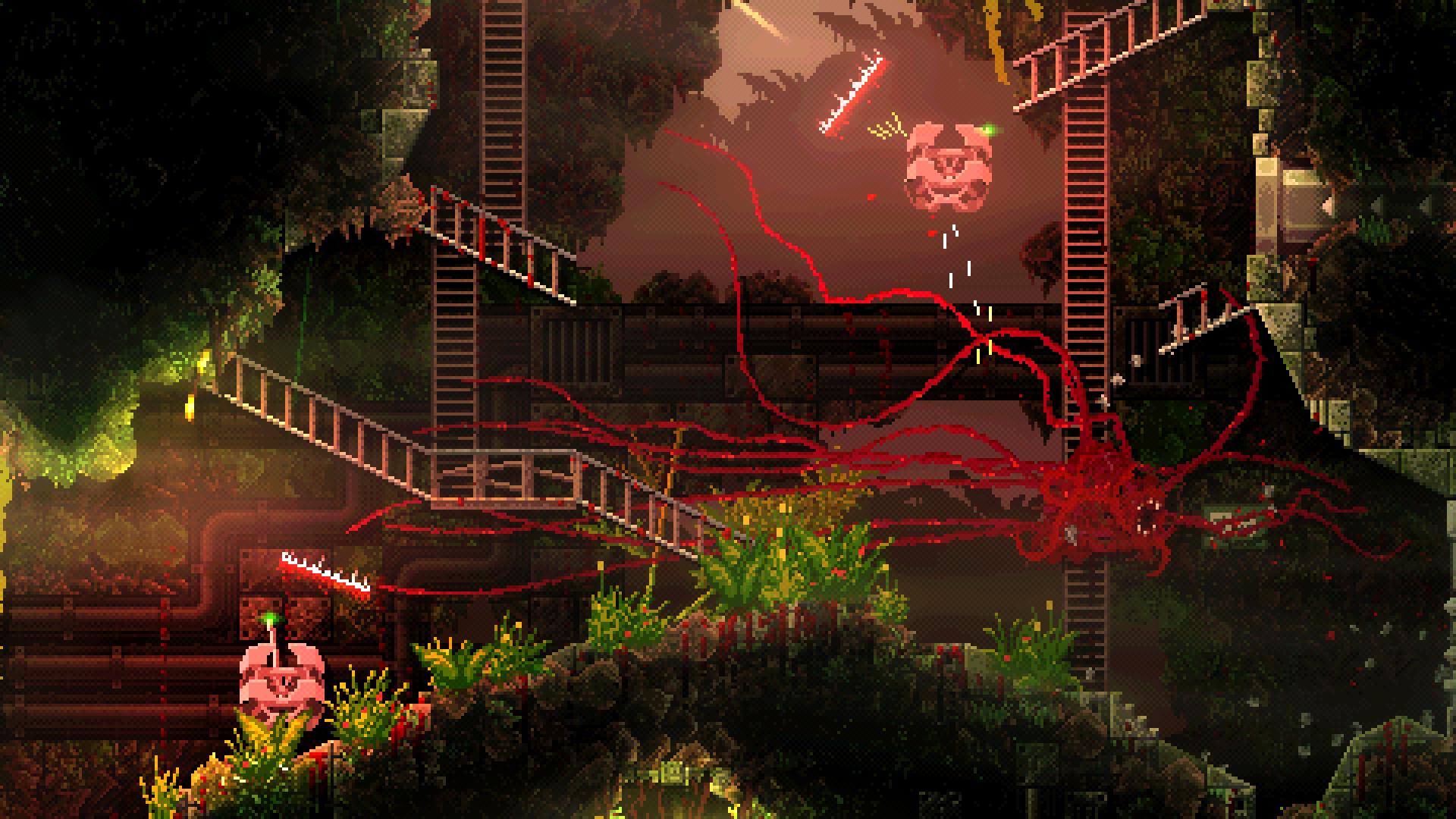 The number one feature I have to commend this game for is its controls, whether you’re playing with a mouse and keyboard or a controller. I tried out both control methods and they have their strengths and weaknesses. With a mouse and keyboard, you control the creature with the mouse by holding left click and pointing where you want to go. The pointer also doubles as aiming for your tentacles that let you grab items and people to munch on. I then swapped to the controller, where moving is as simple as using the left stick. I prefer this control scheme more when it comes to moving, but aiming your tentacle with the right stick isn’t as smooth as it is with the mouse. No matter what your preferred way of play is, the monster moves through levels seamlessly, latching on to every possible corner of the walls and platforms for a buttery-smooth experience. And I use the term “buttery” in the literal sense, as the creature is a gigantic clump of flesh and blood.

Because of the creature’s ability to practically float throughout the environment, this means the levels aren’t as cleverly-designed as other 2D side-scrollers, but in this case it doesn’t need to be. What Carrion lacks in level design, it makes up for in puzzles that rely on the powers you acquire. What’s unique is that some powers require you to have a certain biomass before you can use them. Your biomass will increase with the more humans you eat, or if you wind up at a checkpoint. One power shoots a grapple tentacle, allowing you to latch on to switches blocked by a few cracks in the wall, but you have to be at a smaller biomass to use said power. When you’re larger, that power turns into a dash attack, perfect for attacking humans or going through wood planks. In any other game, this biomass requirement would be an annoyance, but Carrion gets around that by allowing you to deposit biomass in dedicated pools of water that show up in areas when needed. You can use these powers to revisit areas and solve puzzles you couldn’t have before, and each area has a sign by its entrance, showing you percentages on what you need to complete. 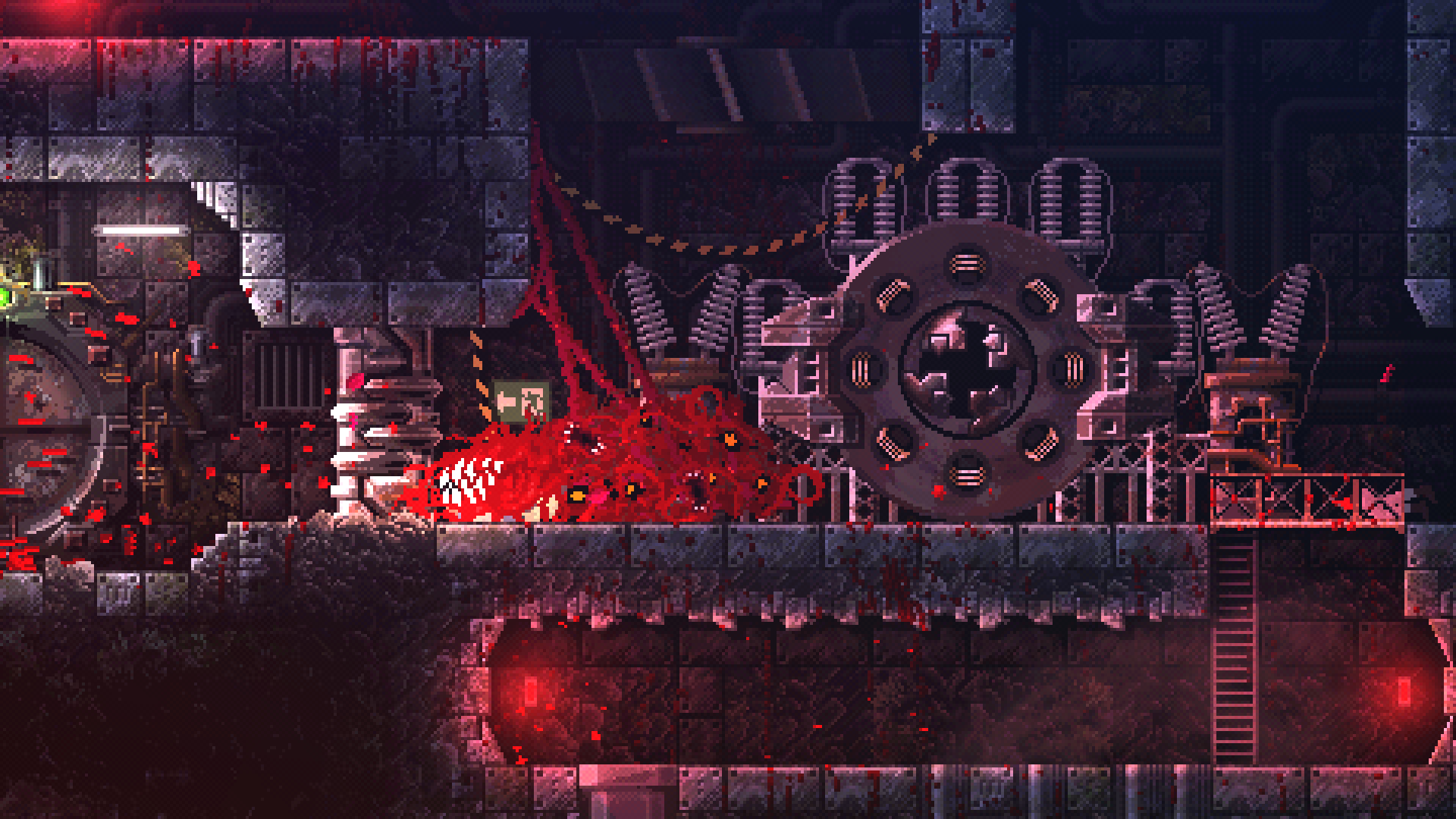 Even though you play as a gigantic monster that’s preying upon human flesh, that doesn’t mean you have no enemies. Some humans are armed with guns, flamethrowers, and shields, and they can take you down in seconds if you go into battles carelessly. Humans with guns are easy to kill, but the armed troopers with shields and flamethrowers are stubborn and require you to use the walls and floors to your advantage. You can crawl in air ducts to unleash horrifying surprise attacks, or if you’re under fire, hide in the floor below until they need to reload. One of the more powerful enemies include a walking mech with machine guns that will splatter you in milliseconds. The only way you’ll beat this foe is by ripping apart the cockpit and eating the pilot inside. Even with challenging foes like this, you won’t find much of a challenge in this game.

Carrion is a simple kind of game. There isn’t much to the overall game design and it’s a breeze to get through, but I’d be lying if I said I didn’t have an ounce of fun with it. Carrion is for people who just want to kick back, relax, and become an unstoppable monster that mows down humans for fun. If you’re in the mood for a horror game where you’re the one who knocks, I can’t recommend Carrion enough.