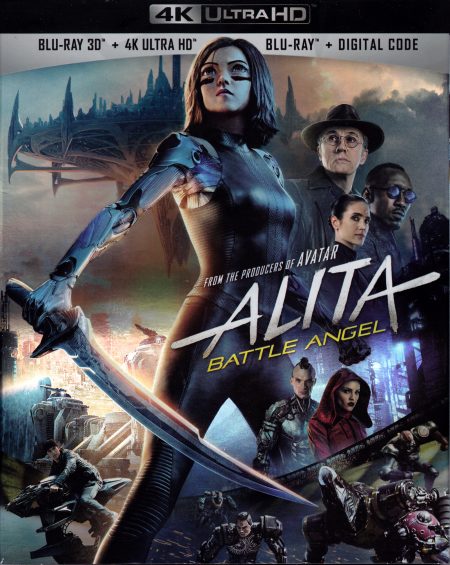 Set several centuries in the future, the abandoned Alita is found in the scrapyard of Iron City by Ido, a compassionate cyber-doctor who takes the unconscious cyborg Alita to his clinic. When Alita awakens, she has no memory of who she is, nor does she have any recognition of the world she finds herself in. As Alita learns to navigate her new life and the treacherous streets of Iron City, Ido tries to shield her from her mysterious past.

I give the Alita: Battle Angel Blu-ray a B+.

I have never read the Manga or even heard of it besides this film. So, I basically went into this not knowing anything and I was totally blown away.  This film deserves more then what people are saying about it.  It is full of action and the CGI was on point. I prefer practical over Computer generated any day but in this film, it was so real and done beautifully that I couldn’t even tell the difference.

There are a ton of things I loved about this film.   Again, this film deserves more then what people are saying about it and Rosa Salazar is amazing in this!  She IS Alita.  They basically used her as the model for Alita who just happens to have bigger eyes that can reach to the bottom of your soul.  If you’re looking for a strong Female, look no further.  Alita starts out as a naive young girl and toward the end of the film,  she is a bad-ass you don’t want to mess with.   I loved Christoph Waltz’s Character, Ido who treated Alita like his own child who he had lost.  But, Alita was so much older than he had expected.  The Motorball tournament is insane.  It’s kind of like Roller Derby but much more deadlier (if that’s even possible).

Definitely, recommend this film and Blu-ray (or watch the 4K version on your big screen TV) with all the insane special features that give you an inside look into the making of this film!